The Madman of Moscato d’Asti

Posted on September 18, 2017 by damewine
ShareTweet 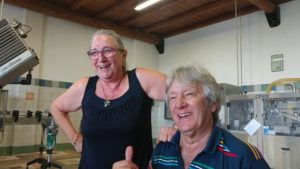 For almost a year, I have been delving deeper into the world of Moscato d’Asti DOCG from Piedmont (Piemonte), Italy. I’ve found it fascinating to research this style that inspired a worldwide trend of making semi-sparkling, sweet Moscato wines. As much of a compliment it is to the Asti area that other parts of the world want to emulate this style, it has been a detriment to its reputation as many mediocre wines have flooded the market bearing the Moscato name, but from areas that do not have the same sense of place, tradition, and most importantly, quality of Asti. This has made the producers who make Moscato d’Asti DOCG even more vigilant to strive for only the best in farming their particular clone of the Moscato Bianco grape on their steep vineyards, coupled with ideal winemaking procedures, enhanced by their intense research and investment. This commitment to excellence is being led by none other than Romano Dogliotti, whom some say is crazy because of the extreme practices he employs to bring a distinctive sense of place to his Moscato d’Asti wines.

Romano Dogliotti came from a grape growing family that specialized in the Moscato Bianco grape. His father sold the must (freshly pressed grape juice) to larger companies who made the semi-sparkling Moscato d’Asti and the sparkling Asti wines. But, in the late 1970s, when Romano got involved in their small family grower business, Azienda Agricola Caudrina, he decided to reserve the best grape bunches from his vineyards, painfully experimented with inventive winery practices that would express the purity of the fruit, bottled it, and sold it directly to wine consumers. Word started to travel about his enticing Moscato d’Asti wine that was named “La Caudrina” and the increasing demand from his local restaurants and wine bars started to cement his reputation with those who sought out the best Moscato. This led to the famous “La Galeisa” Moscato d’Asti, which is his strictest selection from his vineyards, and the delightfully playful “La Selvatica” Asti Spumante which bears a label drawn by the legendary grappa distiller Romano Levi. 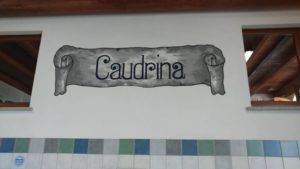 Today, Romano Dogliotti is still an innovator, a passionate zealot that some have deemed a madman in the greatest sense of the word. Although many of the top producers of Moscato d’Asti DOCG wines produce low yields in their vineyards, for quality and concentration, Romano still makes 1/3 less than even the most high quality minded producers. A madman that many of his fellow producers admire, and sigh at the very thought of his efforts and how his standards seems impossible to obtain by mere mortals. 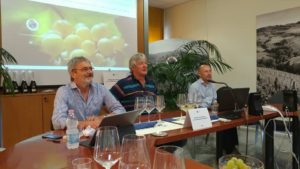 It was fitting that before we visited Caudrina, we spent time at the Conzorsio Asti Laboratories to participate in a seminar conducted by the Consorzio dell’Asti DOCG – a group that protects the Moscato d’Asti DOCG and Asti DOCG wines as well as conducts research and development. Romano Dogliotti is the Consortium’s Chairman, and when it comes to safeguarding the integrity and prominence of these wines, there is no other person that is better suited.

As it seems that the news is constantly filled with everyone trying to fight for the largest piece of the pie, it is great to see that there are still those madmen whose focus vigilantly stays fixed on improving themselves instead of wasting time looking for what others possess that they lack. We need more of Romano’s spirit in the world – a spirit that not only never wavers on its extreme standards but also a spirit that spends each day believing that there is always a higher bar to set. 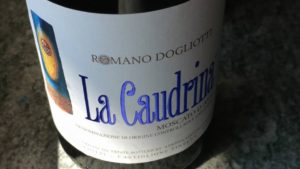 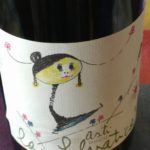 –2016 Romano Dogliotti, La Selvatica, Asti DOCG, Piedmont, Italy: 100% Moscato Bianco planted in 1975 – 6 acres (2.5 hectares). Low alcohol, 7% abv, yet slightly higher than above, and 80-90 g/l residual sugar, made in a fully sparkling way (spumante). Light and agile on the palate with wild flowers and a hint of brown sugar – so much fun!

–2015 Romano Dogliotti, MEJ, Piemonte Chardonnay DOC, Piedmont, Italy: 100% Chardonnay planted in 1980 – only 2.5 acres (1 hectare). Hedonistically tropical on the nose with elegant stone fruit on the palate and a touch of wet stones on the finish. 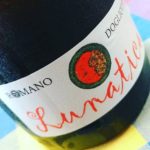 –2016 Romano Dogliotti, Lunatics, Piedmont, Italy: A dry, white sparkling wine made from the local red grape variety Albarossa planted in 2004 – only 2.5 acres (1 hectare). Albarossa is one of the few successful crossings. In 1938, Giovanni Dalmasso thought he crossed Nebbiolo and Barbera, but in fact, crossed Barbera with Chatus (also known as Nebbiolo di Dronero). It is known for its small berries and thick skins that produce wine with delicately spicy and fruity aromas and a creamy texture. Typically it is used as a blending partner, yet a couple producers in Piedmont do make a 100% Albarossa red wine – but this was the first white sparkling wine I have every heard of… let alone taste. It had a gracefully alluring nose with a richly textured body. 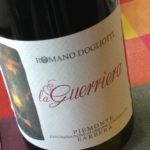 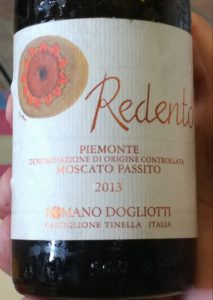 –2013 Romano Dogliotti, Redento, Piemonte Moscato Passito DOC, Piedmont, Italy: 100% Moscato Bianco planted in 1968 that have been dried to intensify the concentration and sweetness – 5 acres (2 hectares). An exquisitely lush and complex sweet wine made from the dried bunches of Moscato Bianco. This wine “Redento” is named after Romano Dogliotti’s father who wisely handed over their family wine business to Romano in 1997 – a fitting tribute.