Posted on September 26, 2017 by damewine
ShareTweet

It was a gorgeous day, one of the hot ones as the weather swung from hot to cool to hot again, when I was visiting wine producers in the land of Moscato – Asti, Piedmont (Piemonte), Italy. I was in the tiny eastern village of Strevi, known for its much higher acidity in its Moscato d’Asti DOCG wines as well as a delicious honeyed note. I was in front of the Marenco steep vineyard “Scrapona” which meant “to hike” in the local dialect. The challenge was placed before my group – we could either try to take on the challenge of climbing to the top or we could take the bus to meet up with those who dared to take on the seemingly almost vertical trek. I took one look up the never ending upward-climbing trail and immediately said, “Oh heck no… I’m taking the bus”. But then many people in the group started skipping up the Scrapona vineyard, some even shouted back to me that they were old enough to be my parents and I was silly to not take on this minor task. And so, damn it, I was not going to look back with regret; I gave a fierce yell of joy before I started up the hike. 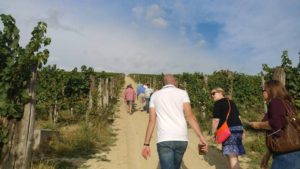 Scrapona is considered one of the best vineyards in Strevi’s prestigious Bagnario Valley – Strevi being one of the first three villages of Moscato d’Asti. This is the first time I really got to dive into the Strevi terroir. It is a shame that their Moscato d’Asti wines are not as well known as Canelli  located in the most eastern part of Asti and they offer a very different interpretation of the Moscato Bianco variety. Their crisp acidity, intense energy and distinctive honey note makes them stand apart from all the other Moscato d’Asti wines I tasted during my visit, and Scrapona was the ideal expression of Strevi’s great potential. 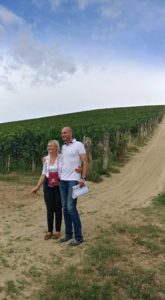 The Marenco family can trace their farming roots in Strevi back to 1261. Currently, three Marenco sisters run the winery and vineyards:  Michaela, with her husband Dr. Giovanni Costa and brilliant son Andrea Costa, and her sisters Patrizia and Doretta. Patrizia is the first woman to graduate from the School of Enology in Alba and she talked us through our tasting as her nephew, Andrea Costa, translated for her. Earlier that day, I learned from Andrea’s contemporaries that he was nicknamed “The Professor”, because he is always trying to educate the younger generation of producers, and so he is obviously following in his aunt’s footsteps of trying to raise the quality of Moscato d’Asti DOCG wines, as well as sparkling Brachetto, which Strevi is known for as well. 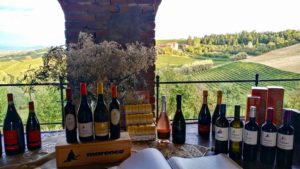 After we finished our winery and vineyard tour, we came back to their lovely Marenco home that had a remarkable view and lots of wines that were matched with a thoughtful dinner awaiting us. As Patrizia and Andrea talked us through our first flight of their 2016, 2012 and 2007 Scrapona Moscato d’Asti DOCG wines, they touched upon the recent research of how well their wines could age. Not only is the Scrapona site unique for Moscato d’Asti, but it is planted with 5 different clones, one of them being a Marenco clone from their original family vines which they believe give it even more distinctiveness. They felt that their high acidity as well as the residual sugar helped to preserve the wine, and, ideally, aging in bottle would express more captivating facets of their wines since recent research shows that Moscato Bianco may need aging to fully express itself.

As we dove into tasting the 2007, I could hear sounds of pure delight fill the room and saw a previously nervous looking Patrizia start to relax with a big smile on her face. She said she was nervous since she was tasting this 10 year old Moscato d’Asti wine for the first time herself, none-the-less with a group of wine buyers and journalists from the US; it turns out that even she was thrilled, surprisingly, with the result.

Enchanting End to a Victorious Day 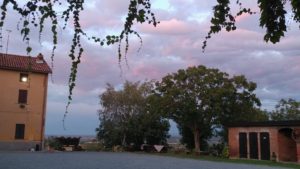 As we continued that evening to taste their wines over dinner, an accordion player serenaded us with his music, Andrea Costa danced with his wife and baby, and I gazed out over the horizon to see a grand painting by Mother Nature. Somewhere out there was that insurmountable Scrapona vineyard that I ended up conquering by reaching the top… don’t get me wrong, I stopped quite a few times while questioning the wisdom of my choice… but I did it and ultimately it was not as bad as my mind first thought it would be… then I looked back at Patrizia Marenco, the first woman to graduate from the School of Enology in Alba. Initially, it must have seemed impossible to her to be that first woman, an impossible task, yet here she is continually pushing the envelope by tasting us on a 2007 Moscato d’Asti… it was certainly a personal victory, but even more importantly, it is a victory that can inspire us all in times of doubt. 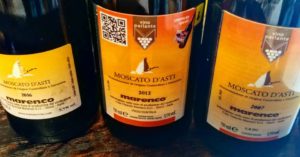 2016, 2012 and 2007 Moscato d’Asti wines were tasted side by side: all have low alcohol (5.5% abv) with around 120-130 g/l residual sugar and semi-sparkling (frizzante) by the Asti method. All considered warm vintages and they illustrated how Marenco wines could still have potential to age even from warmer conditions. 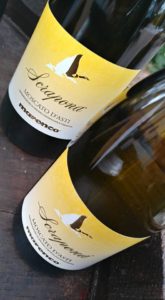 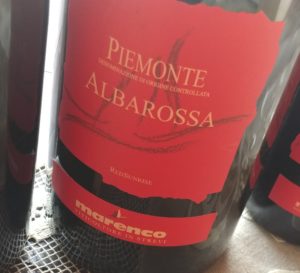 –2013 Marenco, Albarossa, Piemonte DOC, Piedmont, Italy: 100% Albarossa. In 1938, Giovanni Dalmasso thought he crossed Nebbiolo and Barbera, but in fact, crossed Barbera with Chatus (also known as Nebbiolo di Dronero). Albarossa is known for its small berries and thick skins that produce wine with delicate spicy and fruity aromas and a creamy texture. Typically it is used as a blending partner for its color but a few producers have realized its potential as a single varietal wine. Only 5 producers currently make a 100% Albarossa wine. This was a dark, brooding wine with rosemary and charred ember notes and juicy fruit on the palate. 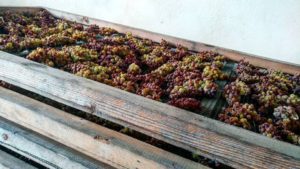 The following two Passito wines used grape bunches that were “naturally” dried, according to their DOC regulations, and mechanical fans and such are not allowed. It is tradition for the local people in Strevi to buy a Passito wine on the year that their baby is born. 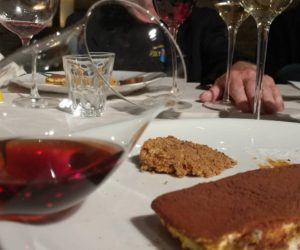 –2012 Marenco, Passri’, Brachetto Passito, , Piedmont, Italy:  100% Brachetto. Only 5 producers among 7 acres (3 hectares) of this Brachetto d’Acqui DOCG exists. It is not made every year. Stewed red cherries with cinnamon and gingerbread that danced upon the palate with all its glorious lushness. 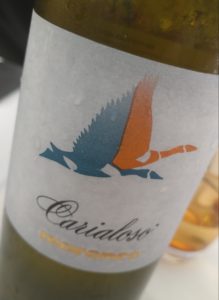 –2016 Marenco, Carialoso, Monferrato Bianco DOC, Piedmont, Italy: 100% Caricalasino (aka White Barbera). When I first heard about this wine, I thought it was the red grape Barbera vinified as a white wine. But no, it is a rare, white native grape of Piedmont which was in danger of disappearing. Patrizia Marenco discovered some old vines in Strevi, and in 1990 decided to start experimenting with them. About 3000 plants of this mysterious variety were reproduced. Toasted almonds with golden apples and fresh tarragon that is well-structured with extract and marked acidity.