Posted on October 7, 2017 by damewine
ShareTweet 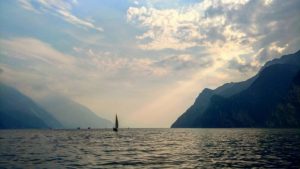 As I sat by the edge of the sailboat gazing at the turquoise water of Lake Garda, in Trento, Italy, I could hear the Captain talking about what made this boat different from the others. It was open in the back to allow people with physical disabilities, such as being confined to a wheelchair, to have access to the boat (also, an elevator could take people to the bathroom below). As serendipitous as I thought it was to be on this sailboat instead of the others – our 30 person group was broken into several smaller groups for the boat rides – the Captain then talked about how they mainly use the boat to help children and adults with autism. There was research that pointed to being on the calming water assisting with them finding a way to relate to other people on the boat, and our boat further assisted the idea of creating a calm world by having a heavier bottom. As my eyes moved up to the Dolomites, a special UNESCO Heritage section of the Italian Alps, I thought about this place that made thrilling, elegant sparkling wines and how it was imbued with many kind hearts. 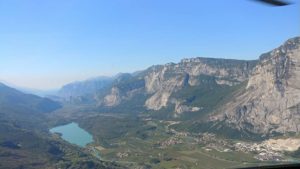 I was in Trento to explore Trentodoc wines, specifically, the leading producer of this wine area – Ferrari Trento. Trentodoc is the designated high quality wine area in Trentino, Italy, that can be used by wine producers who make these traditional wines from a particular mountainous area that are assessed to be to at the approval level for Trentodoc certification. Although the history of these sparkling wines did not start until 1902 with the legendary Giulio Ferrari, it is believed that Trentino has ancient roots going back over 5000 years. But Trentino, with 77% of the land being above 3280 feet (1000 meters) in altitude and the highest vineyards going up to 2953 feet (900 meters), presents some intense challenges, and hence why it took a real lion’s heart such as Giulio’s to make into reality the dream of producing some of the greatest sparkling wines in the world made mainly from Chardonnay and Pinot Nero (Pinot Noir) – as well as Pinot Meunier and Pinot Bianco (Blanc). 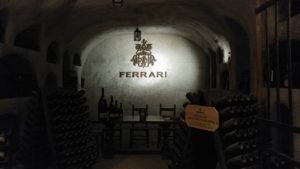 A couple weeks ago, I was fortunate enough to be part of the #FerrariCamp2017, led by Ferrari Trento in their home of Trento, Italy. It is owned by the Lunelli family whose grandfather, Bruno Lunelli, a wine shop owner in Trento, started a partnership with the brilliant Giulio Ferrari. Giulio himself did not have heirs to carry on his legacy, including study in Champagne as well as his knowledge developed as an enologist at the San Michele all’Adige Agrarian Institute. Today, with the third generation taking the reins, Ferrari Trento has become one of the most well-respected sparkling wines in Italy – always part of any special event that holds major significance in the hearts of Italians. Yet still, to this day, they pay homage to the man who laid down the foundation, Giulio Ferrari. 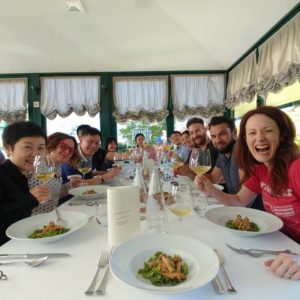 It was not only remarkable to hike through the Ferrari vineyards and tasting several wines, but it was also an uplifting experience to spend time with the Lunelli family and their Ferrari team. We were a group of around 30 people from around the world, mainly Wine Directors and Sommeliers, with a couple of us media people in tow. They invited the group to pose tough questions to the Lunelli family about any misgivings they had about their wines, and there were a couple of tough critics who mainly focused on how difficult it was to go up against Champagne in other markets – although everyone did admit when it came to quality that Ferrari delivered.

It was touching to see some of their long time employees, seemingly part of the family at this point, jump up to emotionally and ferociously defend all the energy they placed into improving their Ferrari wines and the environment and those that live among them in Trento, when it was questioned that it didn’t make any business sense since their prices would always be limited due to lack of international recognition.

What We Value in Life 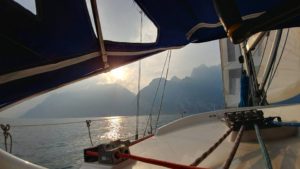 When I think back to that sailboat ride with the Captain sharing his beautiful philosophy of life… how people make themselves miserable because they only focus on how the world benefits them instead of valuing our achievements by how we make the world a better place… I could see what was the purpose for the Lunelli family – constantly striving, whether it was to help improve the practices of the 500 wine growers (each owning an average of 1 hectare/ 2.5 acres) they work with, or making sure people far and wide could experience their extraordinary way of life surrounded by the Dolomite mountains, as they seemed to value their lives based on how it changed the world for the better.

It was fitting that I had an encounter with Camilla Lunelli, granddaughter of Bruno Lunelli and now Communication Director for her family’s winery. We talked about our deep desire to promote a positive, uplifting energy to the world… I was fascinated to know more about her so, later, I did some research and found out that she had spent some time doing volunteer work in Uganda before she decided to come back to Trento to work with her family. Just like I realized that I was meant to be on that boat, I realized why I was on that Ferrari Trento trip… like minded hearts just have a way of finding each other.

Side Note: Although Trentodoc wines can use Pinot Bianco (Pinot Blanc) and Pinot Meunier as well, Ferrari only uses Chardonnay and Pinot Nero (Pinot Noir) in their wines. 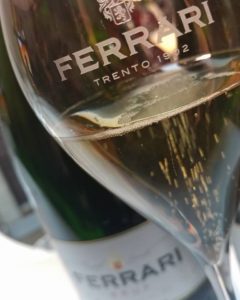 –Ferrari Brut: 100% Chardonnay. They could call this a Blanc de Blancs since it is 100% Chardonnay, but the Lunelli family said it was important to keep it as simply Brut since it does ideally represent their house style – fiercely elegant with a linear shape and complex minerality that finished with white peach and mouth watering acidity. If you love traditional sparkling Blanc de Blancs wines, and you have never had Ferrari Brut, you are missing out! At around $23 in the US, it will quickly become your weekly sparkling treat. 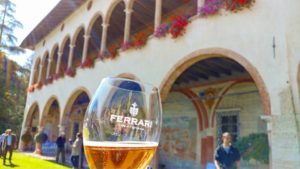 –Ferrari Rosé: 60% Pinot Nero (Pinot Noir) and 40% Chardonnay. A pale pink color with a copper hue that gave enticing aromatics of rose petals and cranberry… this sparkling Rosé, with marked acidity, would be ideally paired with prosciutto and a glorious day spent at Villa Margon in Trento, Italy.

-2010 Ferrari Perlé: Strict selection of 100% Chardonnay from top-quality zones in Trento. Rich, with spiced toast notes, marzipan and candied lemon and velvety texture on the finish. 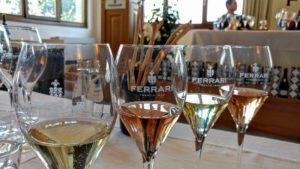 -2011 Ferrari Perlé Rosé Riserva: 80% Pinot Nero and 20% Chardonnay from vineyards owned by the Lunelli family. Orange blossom, wild strawberries and a hint of marmalade fills one’s palate with flavorful delights. Despite being opulent in flavor, this wine still had a freshness and great vitality on the finish.

-2009 Ferrari Perlé Nero: Strict selection of 100% Pinot Nero (Pinot Noir) grapes made into a Blanc de Noirs aka white sparkling. Vineyards owned by the Lunelli family, such as the highest sites of Villa Margon. This wine really stood out for its multi-structural quality – having a firm tactile presence in the mouth with a great weight – it could be paired with game or heavier dishes.  Acacia and honeysuckle danced in my head as I enjoyed this lusciously bodied wine. 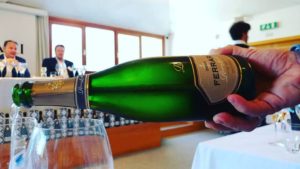 -2008 Ferrari Riserva Lunelli: 100% Chardonnay from the slope section of the Lunelli mountainous vineyards – a minimum of 7 years of lees aging. Creamy texture with alluring flavors of golden apple – and when I came back to it after it sat for a while, it opened up with lemon custard and roasted nuts… it had fine bubbles that gently caressed the palate.

-2006 Giulio Ferrari, Riserva del Fondatore: 100% Chardonnay from up to 1970 feet (600 meter) high slopes on the mountains of Trento that are owned by the Lunelli family. This sparkling wine is only made in the best years, and has at least 10 years of lees aging. When their namesake, Giulio Ferrari, fled Trento during World War II, he decided to build a wall in front of the cellar to protect his bottles from being stolen. When he came back after the war, after being gone for 7 years, he tasted some of these wines and realized how well they could age. This is why they named this wine – one of the longest lived Ferrari Trento wines – after him. This wine truly represents an impressive history in traditional sparkling wine and it is one of the greatest ways to pay respect to Giulio Ferrari. Toasted coconut flakes with brown sugar and an extra exotic layer of mangosteen flesh on the long finish that had a profound sense of finesse. A special, special wine in so many ways.