Posted on October 20, 2017 by damewine
ShareTweet

Some people are just so truly creative that even though they have been raised in a seemingly average life, they are able to be innovators in certain fields that go against the grain of normal convention. Others, who were perhaps unknowingly innovators earlier in their life, are thrust into a tragic situation that challenges their mind, body and spirit, and with their back to the wall, they discover that they were meant for greater things.

A few weeks ago, I went to a low key Champagne tasting in a charming Champagne parlor called Air’s in the West Village of Manhattan in New York City. I was exhausted and overwhelmed that week (I was just getting back from two separate wine press trips) but didn’t want to miss out on tasting some Champagne with other ladies in the local wine and media business. I had no idea that I was about to learn a story of a remarkable woman.

Carol Duval-Leroy, originally born in Belgium, lost her husband Jean Charles Duval-Leroy in 1991 to cancer – he was in the prime of his life at 39 years old; she was only 35. Many would assume that she would just sell the family Champagne house, Duval-Leroy, to a much larger Champagne corporation, but she made a promise to her husband that she would run the company until she could pass it on to their sons, Julien, Charles and Louis – who were only 8, 6, and 4 when they lost their father.

This event was for invited females only since we were drinking Carol’s Femme de Champagne, launched in 1991 after her husband’s death with the 1990 vintage – a Champagne that was originally conceived by her husband. The wine is made from grapes exclusively grown in Grand Cru areas, yet she decided to name it “Femme de Champagne” (Woman of Champagne) since it was up to her to keep the family business running. The Femme de Champagne project was a great way for Carol to get past one of the most difficult times in her life; it was also the time she decided to hire 23 year old Sandrine Logette-Jardin as her Quality Manager. Hiring Sandrine paid off as Duval-Leroy became the first Champagne house to be granted ISO 9000s certification – an inventory procedure that helps to ensure high standards. In 2005, Sandrine became Chef de Caves of Champagne Duval-Leroy – the first female head winemaker of a Champagne house.

Duval-Leroy was the first Champagne house to produce a certified organic Brut Champagne, which is still made today (wine made from grapes grown organically and Ecocert FR-BIO-01 certified), and Carol Duval-Leroy was the first and currently only female to be appointed President of the Association Viticole Champenoise. Duval-Leroy Champagne is served at many of the top Michelin-starred restaurants around the world; when Carol was young she dreamt of becoming a chef, and so, she has a great admiration for the top chefs around the world. 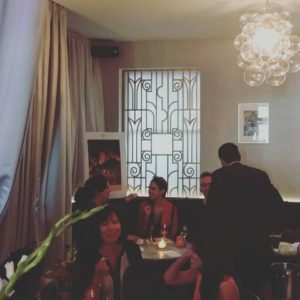 It was not only wonderful to taste such special wines from an extraordinary lady, but it was also nice to see women who I have known in the business for many years… some of them had given me much needed encouraging words about my work at one time, and I have been happy to pay it forward by emboldening other women. Sometimes it is very difficult to see our own worth or value when there is no one to validate our contributions in life…such as having someone like Carol hiring a young woman like Sandrine and entrusting her to bring her family company to another level. 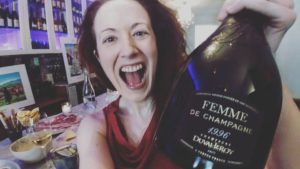 There were a couple of men at this Champagne tasting that I certainly hoped were enjoying being surrounded by women. One of them, who simply introduced himself as someone working for Champagne Duval-Leroy, came over to me as I was tasting the vertical of their Femme de Champagne wines. He was curious to know what I thought… well, the Champagnes, which I was previously unfamiliar with, were even better than I could have imagined… yes, elegant with lots of finesse, yet an intense richness and complexity that is not often associated with “female” styled wines. He immediately said, “Yes, they have a lot more to them than people think.” I found out later that he was one of Carol’s sons, Julien Duval-Leroy, as all three of them work for their family Champagne house. It made me smile to know that he knew the true power of women.

Sometimes There is No Reason

I like to believe that many times, there is a reason for things to happen unexpectedly, but honestly, there have been certain events that have happened in my life and those close to me that I know had no reason – unfortunately, bad things happen to good people and some are given a lot more knocks in life than anyone could deserve. But when these tragedies happen, I find the best thing to do is to think about the people around you… how it is not good enough to just survive; you have to be the force that goes beyond the cards you were dealt in order to find meaning in life. That is what Carol did… and I think her sons are so lucky to have her as their mother… and we are all lucky to have a great example of a woman who took the road less traveled.

Champagne Duval-Leroy owns 494 acres (200 hectares) of the Champagne vineyards they use which makes up 1/3 of their production – 40% of the grapes are from Grand Cru and Premier Cru vineyards. Duval-Leroy is located in the Côte des Blancs, an area in Champagne where some of the best Chardonnnay is sourced, and hence many of their Champagnes are Chardonnay dominant. 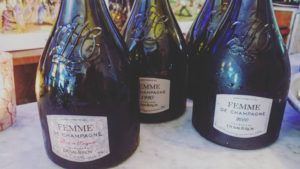 Femme de Champagne is a blend of Duval-Leroy’s best Grand Cru vineyards that is made only during years that they deem to be exceptional as well as having a lower than average dosage compared to other Champagne houses.

-1990 Champagne Duval-Leroy, Femme de Champagne: 89% Chardonnay and 11% Pinot Noir with 4 g/l residual sugar at dosage. The vintage that started the Femme de Champagne is one that is tied with bittersweet memories of pain and finding the strength to go on and take on the world alone. As harvest approached, this vintage saw an extremely rapid rise in temperatures and so those who could be selective produced some richly enticing vintage Champagnes. Big and bold with honey and candied-ginger although the mousse is fine as it gallops across your palate. May 16th, 2017 is the disgorgement date.

–1995 Champagne Duval-Leroy, Femme de Champagne: 76% Chardonnay and 24% Pinot Noir with 4 g/l residual sugar. Generous and inviting with almond paste, lemon meringue and a broad palate – it was creamy and decadent in texture. May 16th, 2017 is the disgorgement date.

–1996 Champagne Duval-Leroy, Femme de Champagne: 79% Chardonnay and 21% Pinot Noir with 4.5 g/l residual sugar. The 1996 Champagnes, as well as Burgundies, are known for their fierce acidity, linear body and in the best cases, pristine fruit… this one lives up to the legend of this vintage while I certainly can’t say that about all the 1996 vintage Champagnes I have tasted. Lots of energy and vitality with quince and an aromatically floral nose… could continue to be cellared for many more years as it seems still a baby. And may I say it had a “holy crap” long finish. Wow! March 21st, 2017 is the disgorgement date. 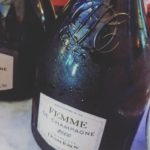 –1997 Champagne Duval-Leroy, Femme de Champagne, Rosé de Saignée: 100% Pinot Noir from Grand Cru vineyards. One of the very few houses in Champagne that make a Rosé by “leeching” during maceration of Pinot Noir rather than blending red wine into the assemblage (final blend) before the secondary fermentation. This 1997 Rosé de Saignée has structured elegance with intoxicating aromatics of sweet spice, crushed cranberries and a textured body that has a flavorful finish. It would be perfect to have with game bird!