Alsace Challenges Our Ideas about Riesling

Posted on September 24, 2016 by damewine
ShareTweet 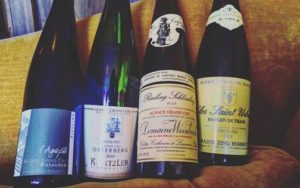 Many years ago, when I was first learning about Alsace (region in North East corner of France), I learned three things: there are lots of different soil types, various grape varieties and mainly produce single variety wines. And I learned, generally, that each variety was meant to be planted in a particular soil. As many of us find out through time (with any topic), it takes a long time to gain a true understanding of a subject. In the beginning, we learn the sort of “CliffsNotes” of a topic – an abridged version. But in reality, well, not every variety needs to be coupled to one particular type of land.

It is great that Riesling has been getting some love lately, yet the love is still too little considering the pure awesomeness of this variety. It is a white grape variety, and so it is already fighting an uphill battle for prestige. Riesling can be many things, but it will never be a big, alcoholic wine – even though weight, body and type of acidity will certainly vary depending on vineyard, producer and vintage. Riesling typically makes racy, exhilarating wines that pair nicely with a diversity of cuisines. That is why Paul Grieco, former wine director/partner of Hearth restaurant in NYC, made 40% of the wine list there Riesling (even though it is an Italian restaurant) when he was still associated with it. He even started the now infamous “Summer of Riesling” campaign at his chain of Terroir wine bars. But he himself is still frustrated with the lack of popularity of this noble grape variety. Last year, at a wine seminar, he exclaimed, “Is this not the time for Riesling? Why is this still so g*ddamn hard?”

But I have just as much frustration with not only the struggle to take Riesling more main stream, but also the still constant struggle for notoriety for Alsace Riesling wines even among Riesling enthusiasts. Of course, Germany and Austria are great classic Riesling producing countries, but somehow Alsace always gets tucked away in the corner, and in the end, it is the wine consumer, as well as the Riesling winelover, who ends up missing out. Well, to paraphrase Patrick Swayze, no one puts Alsace in the corner!

Even through Alsace is pretty far north, it receives a significant amount of sunshine as well as having the Vosges Mountains protect it from intense winds and rains – and so the wines get a lovely ripeness while keeping their zingy acidity. Also, going back to the idea of the assortment of soil types, another great point about Alsace is that they are not afraid to grow Riesling on what might be considered unorthodox soils in other areas. Alsace Rieslings are capable of expressing extraordinary notes that I would never associate with Riesling wines from other countries. Their wines keep me guessing and coming back for more. 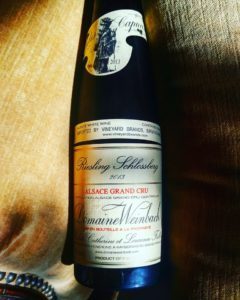 I was taught many, many years ago in wine class that the epitome of great Riesling wine was associated to slate soil. Now I love the Mosel as much as the next wine nerd, but there is not only one way to express greatness. I realized that the first time I had an Alsace Riesling from granite soil, such as the one I had recently, a 2013 Domaine Weinbach Riesling from the Grand Cru site “Schlossberg”. This site tends to have poor soils with low water retention which produces highly aromatic Rieslings. This was certainly true with this wine, with an intense floral nose, a touch of spice and exotic pineapple note. 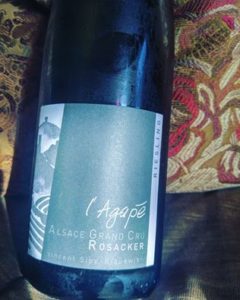 Well, even though granite and Riesling were always a well respected combination in the wine world, many may not know the magical combination of Riesling and limestone. Earlier this year, I went to a seminar led by John Winthrop Haeger, who wrote the book Riesling Rediscovered (a great reference book by the way), who not only told us why the combination is a fantastic one, but showed us through tasting us on sixteen Rieslings wines grown on predominately limestone soil. There have been studies that link high amounts of calcium, as present in limestone soil, to help retain acidity even late in the season; that means a producer can keep the grapes on the vine longer gaining more flavor. The 2011 Domaine Agapé Riesling from the limestone dominant Grand Cru site “Rosacker” had an incredible flinty minerality and crisp acidity while still having juicy lemon confit flavors on the palate and dried wild flowers on the finish. 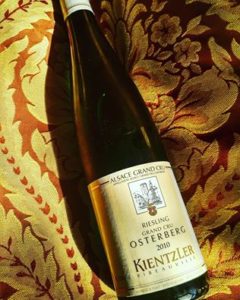 2010 Domaine André Kientzler Riesling from the Grand Cru site “Osterberg”, which yes, has marl-limestone-sandstone soil, had an intense linear minerality – like a blade. This wine had a remarkable backbone of fierce acidity that made my mouth water and exhilarating flavors of lemon zest and wet stones on the finish. I did not want to look up the info on the particular vineyards until after I tasted it because I did not want to be influenced by what I read. Well, funny enough, in Riesling Rediscovered, Haeger said that the Osterberg site was, “powerful, with iron-fisted minerality”. Yeah, that definitely describes what I got from this Riesling that was grown in marl-limestone-sandstone soil. 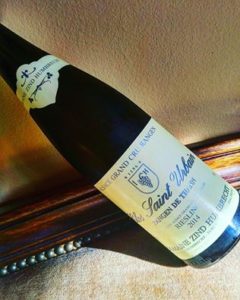 I honestly have to admit that I have never thought of Riesling grown on volcanic soil, but it makes sense. The wines from the volcanic soil of Mount Etna, Sicily are hot! If you want to see a bunch of wine geeks in New York City lose it, just bring out some Mount Etna wines. But their recent popularity is well-deserved with their alluring aromatics that make one feel they could get lost for hours in those wines. Well, the same can be said for Riesling grown on volcanic soil. I was able to get that smoky, volcanic quality out of the 2014 Domaine Zind-Humbrecht Clos St Urbain Grand Cru site “Rangen de Thann”. This wine had a great precision with pristine white peach fruit and again that incredible intoxicating smoky note. Wow! This should be the next wine that wine geeks lose their sh*t over.

Sometimes being Uncomfortable is Good

Riesling has an affinity for terroir, a specific type of place, and sometimes in our own dogma we forget that we cannot truly know it until we experience its transformation from a diversified selection of vineyards. The same can be said of Alsace – if you have had a couple of Alsace wines and you feel that they are not exciting, then I’m afraid that a couple of examples can never let you know how thrilling a wine region it can be.

All of us have our dogma to a certain degree, whether we like to admit it or not, and we do not want to be forced out of a certain mind set because it makes us uncomfortable. But if we are not willing to become uncomfortable then we became jaded, only mildly content with life. I don’t know about you but I don’t want to be that way. I want to shake up my life, question everything I know all the time, and feel like each day is an adventure. And so, I invite you to drink Riesling from various soils and taste them side by side. Go out and try a wine region that you have given up on in the past. Have someone blind taste you on a combination of your favorite and least favorite wines – the results may surprise you… make you feel silly at first… but ultimately it will ideally make you wake up the next day giggling at the fact that life still has a lot more fun surprises in store for you.

Celebrating Wine, Life and Inspiring Colorful People in New York City and Beyond!
View all posts by damewine →
This entry was posted in Dame Wine and tagged Alsace, France, Riesling, Soil, Terroir. Bookmark the permalink.