Should a wine producer focus on only a couple varieties? Or many varieties?

Posted on March 13, 2016 by damewine
ShareTweet

Why only focus on a couple?

As one can imagine, only focusing on one or two varieties would be a chance to specialize in only a couple styles of wines, and may ensure greater consistency of quality. Some producers are limited in their choice of varieties if they want to be able to use the local appellation, such as Chianti or the above mentioned Burgundy on their label. These restrictions are typical in Old World winemaking countries.

Also, it could be a chance to easily sell out one’s wine if they are taking advance of a trend. I remember visiting New York’s Finger Lakes (finger lakes blog link) last year and hearing many of the smaller producers say that they could easily make only rosé wine and they would have no problem selling all of it to tourists and the New York City market. Dry rosés have become immensely popular in New York City over the past five years. This popularity peaks during the summer, but there is such a high demand that in the past couple years there have been “rosé shortages”.

Why have many varieties?

I know many producers who would not agree with the notion that fewer varieties grown and/or bought guarantee consistent quality. Dealing with more varieties makes it more complicated and creates a lot of challenges, but if the producer is up for the challenge then certainly good quality can be achieved on a regular basis. South Africa is a great example of a country that grows many different types of varieties. This is due to the great diversity of their soil and microclimates, and so, many producers will not only make various different varietal wines but they will make blends made from several varieties.

Some regions in the world are limited to the varieties they can plant due to having extreme climatic conditions, such as Germany using their native cold-tolerant Riesling.
But some climates are more manageable, such as a warm climate like Sicily. Sicily is the largest island in the Mediterranean, and because of its size, unique history and diversity it could be considered a separate country from Italy. It was once known as a region that produced mainly bulk wine, but since the 1980s they have made major improvements in their vineyards and winemaking practices. For example, Mt. Etna, the active volcano that is in the north-east corner of Sicily, has become one of the most exciting wine places for serious wine enthusiasts. Another exciting area is the Cerasuolo di Vittoria in the south-east area of Sicily, the only area that has been given a DOCG, which is where Maggiovini is located.

Because of their warm climate moderated by the water and by their investment into the vineyards and winery, Maggiovini is able to produce rich wines that have an underlying quality of elegance, which is evident in their Cerasuolo di Vittoria DOCG. French varieties as well as native ones do well in this area, and so Maggiovini grows 28 different varieties, including international and native varieties. I was surprised that I was such a big fan of their Cabernet Sauvignon. They are even experimenting with ancient varieties by trying to identify them and test if they are capable of making quality wine.

Their favorable climatic conditions make it possible for them to grow a range of varieties, and it is a smart business choice to help hedge their bets by making sure to not heavily invest into any single variety. I asked the New York’s Finger Lakes wine producers why they didn’t just make mainly rosé wines if they had such a huge demand from New York City. Their answer was simple: if the trend for rosé wine died then they could go out of business; diversifying their varieties helped to secure their survival.

Diversity of Cultivation is a Way of Life

Maggiovini also grows vegetables, cereals, almond trees, olive trees and carob trees, as well as their many different grapevines that are cultivated organically. And so the reasons behind the choices of how many varieties a producer should place their focus on not only have to do with the climatic, soil and/or regulation issues, it is also a choice of lifestyle. Some feel that focusing on one or two is the best for the achievement of excellence, and some feel that the excellence comes from the fact that one is able to achieve harmony among so much diversity.

-2014 Maggiovini, Rasula Cattarato IGP Terre Siciliane:
100% organic Catarratto. A nice example of how Catarratto is capable of making interesting whites under the right circumstances. White floral notes with lemon peel and bitter almond finish. A hint of salinity lingers on the palate. I’m also a fan of the texture of this wine as some skin contact gives it an interesting palate. 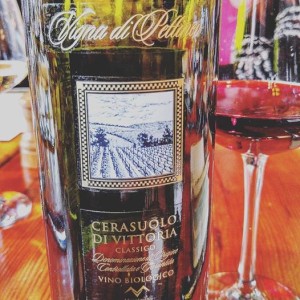 -2013 Maggiovini, Cerasuolo di Vittoria Classico DOCG:
50% organic Frappato and 50% organic Nero d’Avola. This was hands down my favorite wine. Cerasuolo di Vittoria is an area that is known for elegant wines, which was evident in this one. Frappato and Nero d’Avola make perfect partners, creating a wine that has an exhilarating nose with fine tannins and wild plum flavors. A very exciting wine!

-2013 Maggiovini, Villa Maggio Cabernet Sauvignon IGP Terre Siciliane:
100% organic Cabernet Sauvignon. A nice fresh quality gives lift to this well structured, yet soft textured wine. It is a big Cab with loads of ripe black currant fruit but conveys a sense of overall powerful elegance. Even though the Cerasuolo di Vittoria was my favorite, I must say I was impressed by this Cabernet Sauvignon and it really shows the quality potential for Vittoria.