Posted on August 7, 2015 by damewine
ShareTweet 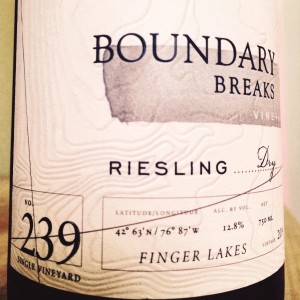 On July 22nd, I participated in a virtual tasting on Twitter that consisted of winemakers walking us through a tasting of their wines from the Finger Lakes, New York. The focus was on their aromatic white Riesling wines. A new winery, called Boundary Breaks Vineyard, talked briefly about their mission to understand specific clones of Riesling, to the point where they market some of their wines as being single clone wines. And yes, since that time I have been obsessing about clones – which is funny to those of you who know me as a big Star Wars fan.

What the heck are clones?

I’m happy you asked that question 😉

I always like to refer back to The Oxford Companion to Wine for a clear definition:
“Clone — in a viticultural context is a single vine or a population of vines all derived by vegetative propagation from cuttings or buds from a single ‘mother vine’ by deliberate clonal selection.”

Basically, many regions realized a long time ago that it was beneficial to observe their vines in the vineyards realizing that certain vines had superior qualities over others. This research has been extended into considering the final wine product of certain “clones”. Even though there is a ton of research being conducted on this topic, there are still debates of how much a clone can influence what we taste in a glass of wine.

Clonal selection was most widely practiced in Germany as early as the 1920s, and other European countries have followed suit. There are also vine improvement programs in many New World winemaking countries as well. This was encouraged by the wide spread practice of grafting rootstocks onto scions (the top, fruit bearing part of the vine) due to the devastation that phylloxera caused in the late 1800s. This was not only due to the need to control the outbreak of diseases during that time but also helped to eventually open the door to more choices – a grower could pick a rootstock that was ideal for climatic/soil conditions and then pick a scion from a specific clone that would be ideal for a certain attribute they desired.

Of course some rootstocks and scions are more compatible than others, but as usually, I digress and so back to The Clone Wars.

Okay, so why would a grower and/or winemaker want a specific type of clone of a grape variety?

Disease resistance (we mentioned that), good flowering and fruit set for vines (if it starts out bad it just becomes an uphill battle for the rest of the season), quantity (more grapes= more volume, more volume=more wine to sell) and quality (making that glass of wine taste even better).

Let’s talk about the variety everyone likes to talk about when the topic of clones comes up – good ole Pinot Noir. Not only does Pinot Noir have a tendency to mutate, it also is a well known variety that has made some of the greatest red wines in the world – originating in Burgundy. A common clone is 777 due to its low susceptibility to get grey mold (something that keeps Pinot Noir growers up at night since the grape is thin-skinned). For example, Stonecrop in Martinborough, New Zealand has 25% of their Pinot Noir vineyards planted with the 777 Clone due to having a good disease resistance.

Gewürztraminer is a clone that some trace back to the Traminer family. It has a tendency to get millerandage (aka abnormal fruit set) causing the grapes in the same bunch to grow to different sizes – and may significantly reduce the yield of the harvest. And so it is known as a difficult clone to grow.

But what is interesting about grape growing, or wine in general it that many people will have a different perspective on the same issue. For example, abnormal fruit set is not considered, by some, as a detriment. Some producers want to encourage it. James Healy at Dog Point in Marlborough, New Zealand, planted the Mendoza Chardonnay clone due to its affinity to get uneven fruit set – giving the wine more concentration with the smaller berries.

Many of us have heard the stories of Burgundy and how, at one time, they rested on the laurels of having a great name and allowed inferior quality wines to be produced. Since then they have significantly improved their quality as a region (there were always certain producers that stood out with higher quality) and some have given credit to the replanting of certain clones; uprooting the clones that were mainly about quantity and changing them out for quality clones. Conversely, there are those that argue that their updated winemaking practices (and warmer vintages) have made the biggest difference in the leap towards greater quality wines.

But there are many producers out there who want clones that produce higher quantity. Sometimes wine is not about quality, it is about price – the cheapest price – Charles Shaw Wine is the most famous example from the US aka Two Buck Chuck. How else can a producer sell a wine below a certain price point unless they are harvesting grapes at a high yield?! No really, if you know, please tell me.

Last spring I had the pleasure to meet with Dr. John F. Mariani Jr, at his estate, Castello Banfi, in Montalcino, Tuscany. I remember him stressing that when he first came to Tuscany to establish a winery, he realized that he had to raise the quality perception of the region by raising the quality of the wine. They were one of the first in that area to do research on Sangiovese clones. Many years ago I thought all Brunello was made from the clone Sangiovese Grosso – but that is not true. There are over 600 clones of Sangivoese! Say what?! You heard me.

Banfi uses a few different clones, but one great example is the Janus 50 that not only shows more extractable substances to give better color and structure, but it also has one of the most intense aromatic profiles.

Earlier this year I went to a wine trade event that featured Giovanni Busi, current President of Consorzio Vino Chianti, who talked about what the Consorzio has been doing to significantly improve the quality of Chianti. Over the past ten years, the Consorzio has invested 10 million Euro per year into improving the vineyards and promotion of Chianti, and that amount has increased up to 30 million Euro over the past couple of years. A majority of that money is allocated to planting better clones.

Also, Stonecrop winery, in Martinborough, has a fun example of using a clone to gain better quality: 50% of their Pinot Noir vineyards are planted with the Abel clone. It is a New Zealand legend that a man named Abel brought back a clone from one of the Domaine de la Romanée-Conti vineyards. I know, not very likely this story is true – but life needs fantastical stories and legends!

And understanding clones may help producers make better decisions in the vineyard and winery.

This leads us back to the winery that inspired me in the first place – Boundary Breaks.
Yes, they are using quality Riesling clones (Geisenheim 110, 98, 239 and Neustadt 90), but what fascinated me was the idea that they are doing extensive research to figure out the best way to treat each clone. Even trying to figure out how that “petrol” (some may recognize as the more positive note of “flinty minerality”) note develops, since new research suggests that it might be a combination of certain clones vinified with certain yeasts. They currently produce three different single clone wines – I quickly talk about one of them in my bullet point tasting notes below.

Why are there Clone Wars?

Well yes, I wanted to make a reference to Star Wars – but there are different views on whether focusing on clones is bringing us to more exciting possibilities for wine, or potentially limiting wines to a more generic style.

Basilio Izquierdo, who was the head winemaker for CVNE and Contino for more than 30 years, believes in Massal Selection (the identity of individual vines are not maintained) for high quality wines, because they are already adapted to the area and offer complexity from the diversity sourced.

It is not such a black and white issue of whether the emphasis on clones will make the future world of wine better or worse. Unlike Star Wars, it is not so easy to tell the bad guys – they are the ones with the red lightsabers 🙂

The following wines were tasted on July 22nd during the virtual tasting.

Vintage notes for the Finger Lakes
2013: lighter bodied wines with less ripeness due to earlier harvest dates
2014: riper and fuller body than usual due to extremely cold winter that helped the grapes stay on the vines longer with a lower yield producing more concentrated wines

-2014 Dry Riesling from Chateau Lafayette Reneau, Seneca Lake, Finger Lakes, NY:
good clarity of mandarin and mango with a little prickle on he palate – very impressive that it was still in great shape after being opened for five days (placed in frig under vacuum seal)

-2013 Fathom 107 from Wagner Vineyards, Seneca Lake, Finger Lakes, NY
(65% Riesling & 35% Gewürztraminer):
lychee Gewürz notes, not too perfume-y which I like, only a hint of rose on the finish, but linear body from the Riesling makes this wine a real mind trip because I always expect broad palate and bigger weight with lychee notes, fun wine