Posted on February 22, 2016 by damewine
ShareTweet

Donald Hess has a great knack for picking vineyards and making wines that are able to express unique qualities of a particular region. When he was at the helm of the Hess Family Estates, he was able to bring together a collection of wineries that all showed an intrinsic aspect of a certain terroir. This was evident when I tasted two of their wines from the Salta Province of Argentina, Colomé (one of the oldest wineries in Argentina), and Amalaya, with Colomé winemaker, Thibaut Delmotte, a few weeks ago.

Hess has the ability to see a piece of property’s potential as a future high quality producing vineyard, even though it may be considered an uninhabitable place by others. Some of the properties that he has planted in Salta were said to be too dry and/or too high in altitude to produce high quality grapes.

The Importance of Water

Water plays a great role in growing healthy grapes. Wet, humid climates, such as Virginia in the US and Bordeaux in France, can have excessive water. Too much water and humidity may cause diluted grapes, too much energy into the leaves, too little energy into the grapes, development of a shallow root systems and vine disease.

Alternatively, lack of water can cause extreme stress for the vines, which can incidentally cause photosynthesis to shut down. Photosynthesis is the process by which the vines convert light into energy, and so, it is easy to see how this could be a problem.

The first property that Hess bought in Salta is called Finca Amalaya, and Amalaya later became the name of their second label. Amalaya, in Spanish, expresses the hope that a certain event will occur, even though many times that event seems like an impossible feat. Many locals thought it was madness for Hess to buy this property for the purpose of planting a vineyard, since there was no known source of water. But the story goes that he took off his ring and waved it in the air to sense the water in the ground, and to everyone’s shock, he found water. And not just any water, but what they call “sweet” water – it does not have high levels of salinity, which is important when using it in the vineyards.

Since Hess mainly made his fortune from building the largest mineral water producer in Switzerland, Valser Water Company, it is said that he has a strong feeling for finding pristine water. Call it a talent, call it a gift, but it is something that can not so easily be taught. 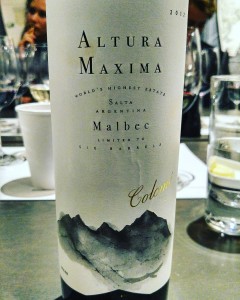 Donald Hess goes even further with his pioneering spirit of spearheading plantings in vineyards at high altitudes. Colomé has just released a wine which has the label of being the “World’s Highest Estate”, called Altura Maxima. The wine is made from Malbec planted in a vineyard that sits at an elevation of 10,207 feet (3,111 meters). Interestingly, Colomé tried many other varieties before settling on Malbec, even though one would think that they would settle on Malbec by default, but they wanted to see how other varieties would fair. They tried Cabernet Sauvignon, Tannat and Pinot Noir, yet due to frost issues in spring and early fall they needed a variety that had a short cycle and that had bud break later.

In the end, Malbec was the winner, but not without a struggle. They planted the Malbec vines in 2007 and it seemed to be an unending battle with the previously mentioned frost, as well as the donkeys, hares, bees, wasps and birds. After building a fence and using nets on the vines, they were able to produce an extraordinarily high quality Malbec with a breathtaking nose (see tasting note below).

As the altitude increases, so does sunlight. The skins of grapes thicken to protect themselves and so it gives more tannin to the wine. But not just any tannin, it creates a higher proportion of polymeric tannin. I know what you are saying, “What the heck does that mean?!” Basically, it is softer tannins that give more elegance, rather than harsh structure to a wine. And as I mentioned before, the aromatics are off the chart. Malbec is a grape that is capable of expressing beautiful layers of fragrant deliciousness, however, it is, many times, grown in a way where it never gets to live up to its potential.

In the Altura Maxima vineyard, the increased sunlight intensifies those intoxicating aromas, while the cooler temperature retains acidity keeping freshness in the grapes; Colomé’s high altitude vineyards have up to a 25 degree difference in temperature between day and night.

Many of us have heard that making wine is both a science and an art. Typically, the art is considered the artistry of the winemaker in the winery. I agree that is part of it, but it is not the only aspect to the art. There is a feeling for the land that sometimes goes beyond what common logic dictates. Sometimes this is shown in family vineyards that have been owned for decades, where the vines are like the owners’ children. In this case, the owner knows his vines so well that no specialist or expert could ever advise them better than their own experience with their “children”.

And then we have the visionaries. Those special human beings who can see the potential of a piece of land that no one else can see. Sometimes they are limited by resources, or by the lack of leadership skills that is needed for such an enterprise, but once in a while, a person will embody all of the traits needed to transcend the impossible into possible.

Donald Hess is that man. A man who appreciates art, apparent by his support of contemporary artists; a man who is not afraid to carve out a new path; a man who has the resources to make dreams a reality; a man who is able to show the world of wine that there are no boundaries; a vineyard whisperer.

Hess retired from day to day management of Hess Family Estates in 2011, but he remains an important part of the vision of the company. The Colomé and Amalaya wines are not only bewitching wines because of their appealing nose and palate, but they are a symbol of the deep rooted potential in all of us, that, tragically, most don’t get to realize, but a few do. Sometimes, something crosses our path, such as the Altura Maxima, that inspires us to take chances, because even though we could fail, we may ultimately create something grander than we could have imagined.

-2015 Amalaya White Blend (85% Torrontés & 15% Riesling):
A refreshing wine with pretty flavors of lemon confit, honeysuckle and exotic spice. It was a happy accident that they found a grower with Riesling in his vineyards, and even though it was not part of their original plan to blend Riesling, it has certainly worked out as a delightful partner for Torrontés. They grow their white varieties in the Pergola Trellising system (it is like a bunch of attached gazebos made of leaves) to help keep them from getting sunburned. Colomé has two different wineries, one for their Amalaya selection, which focuses on blends and making wines at a higher quantity, and Colomé, which focuses on single varietal wines that are made at significantly lower quantities. Suggested Retail Price: $12

-2015 Colomé Torrontés:
Ripe, juicy white peach with a touch of perfume. Thibaut Delmotte, Colomé Winemaker, said that they pick these grapes later since Torrontés has a tendency to have a short, bitter finish if it is not ripe; I have to say that this was the first Torrontés I have had that did not disappoint on the palate. Suggested Retail Price: $15

-2014 Amalaya Malbec (85% Malbec, 10% Syrah & 5% Cabernet Sauvignon – allowed to place ‘Malbec’ on the label if there is a minimum of 85%):
Blackcurrant flavors with notes of pepper and dried herbs. This wine has a nice balance between sweet fruit and savory flavors. Suggested Retail Price: $16

-2013 Colomé Malbec Estate:
Not only did I enjoy the concept of this wine, but it certainly gave a lot of bang for the buck. It is a single variety wine that is multi-altitude. What does that mean? The fruit comes from three vineyards at three different altitudes. 10% comes from La Brava Vineyard, at 5,740 feet (1,750 meters), which gives the wine ripe, generous fruit; 65% is from Colomé Vineyard, at 7,545 feet (2,300 meters), which gives the wine fresher fruit flavors with higher notes of spice and flowers; 25% is from El Arenal Vineyard, at 8,530 feet (2600 meters), which gives structure, elegance and a sense of minerality. It was a wine, especially considering the price that showed multiple dimensions in its texture and flavor profile. Suggested Retail Price: $25

-2014 Colomé Malbec Autentico:
This wine is called “Autentico” because there is no oak aging (100% stainless steel), no filtration and no fining, and so, one gets to taste the fruit without it getting help from the previously mentioned processes. Also, an interesting side note is that all of Colomé’s reds use indigenous yeasts. The grapes for Autentico are picked later, since it is essential to have ripe fruit, skin and seeds when oak cannot be used, so this wine was bursting with flavors of blueberry pie and stewed plums, and it was proof that even though Malbec benefits from oak, it does not necessarily need it. Suggested Retail Price: $25

-2012 Altura Maxima Malbec:
As you can imagine, when everyone saw the $125 price tag compared to all the others, there was a question if this wine would be worth it. It is the “World’s Highest Estate” at 10,207 feet (3,111 meters). Well, this wine’s breathtaking, outstanding quality was the answer to the question of price. I always thought that only moderate to light bodied reds could have the best nose. This wine proved me wrong! It had one of the most exhilarating noses that I have had in a while… and it was big and structured and fresh while swirling exciting violet and granite aromas in my head. This is the first vintage of this wine, and only six barrels made. It you can get it, count yourself lucky. It is a bucket list wine. Suggested Retail Price: $125