Piedmont, Italy: Not all the Wines are Well Known Superstars

Posted on April 28, 2016 by damewine
ShareTweet

Sometimes I have a plan to write about a particular wine subject that has been weighing on my mind, but sometimes I am led in a direction that I was not planning. This was the case with me wanting to write about Piedmont after attending Vinitaly (Vinitaly is an international wine competition and exposition that is held annually in April in the Italian city of Verona). Originally, I had thought I would seek out a lesser known region to write about…. perhaps varieties that most wine nerds haven’t experienced…  I did not think I would have such a need to talk about the well known Piedmont (called Piemonte in Italy) which includes some of the biggest wine superstars such as Barolo and Barbaresco.

The first day of Vinitaly I was invited to go to a seminar led by Michaela Morris, who is one of only three Italian Wine Experts in the world. We had become acquainted through a mutual friend, Cathy Huyghe, on Twitter. Cathy is a yogi, like Michaela and myself, and she expresses that yogic view by examining the world of wine in her book Hungry for Wine. 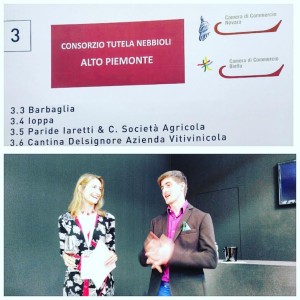 During the seminar I noticed firmer tannins and more black fruit in the Gattinara wine than the Ghemme – the Ghemme being lighter and having a distinctive mineral note. But there were other areas that honestly I have never heard of until that seminar: Boca DOC, Bramaterra DOC, Colline Novaresi DOC, Colline Novaresi DOC, Coste della Sesia DOC, Fara DOC, Lessona DOC, Sizzano DOC and Valli Ossolane DOC.

Did that long list of a bunch of different “cru” sites in Italian confuse you enough? Well, like anything, it is always overwhelming when you hear a list of names that are completely unfamiliar so I picked three wines, that I re-tasted after the seminars, that I recommend at the end of this post.

Generally, as compared with their southern cousins, northern Piedmont Nebbiolo wines are lighter, more aromatic, have softer tannins, and sometimes they are blended with local varieties. They are typically a few degrees lower in alcohol – when they are picking at a potential alcohol of 15% abv in Barolo, the north will be picking at around 11.5% abv. The acidity seemed more evident giving the wines great tension and energy that hinted towards the ability to age.

Of course, generalizations do not scratch the surface of the specifics of these “cru” sites and I hope to do that at a later time. For now, they are worth seeking out, and I have found many of them in the New York and California areas on www.wine-searcher.com 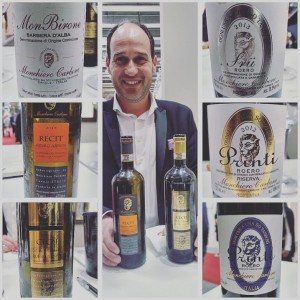 Later that day I got an email from a colleague in New York City, who knew I was at Vinitaly, and she asked if I had wanted to meet the President of the Roero Consorzio. Well, I simply thought it was fate – if there is such a thing. Another special area in Piedmont that I always wanted to delve deeper into… my first introduction was over five years ago when I worked in distribution. My company had just added the wines of Bruno Giacosa to their portfolio and so we had a whole afternoon of tasting their Barolo and Barbaresco wines. The wine that blew everyone away was their Roero Arneis. It was the first time I had tasted Arneis – it was generous yet elegant.

I was excited to try another Arneis (white grape) and to learn more about the Roero Consorzio (an association of wine producers that represent a specific wine growing area).  And so I had my meeting with the gracious Francesco Monchiero, who had become the President since the start of the Consorzio in 2013.

He explained that Roero was a special place within itself but had always been lumped in with the rest of the Langhe area with better known names such as Barolo, Barbaresco, Alba, etc. It was important for them to form their own Consorzio to help educate and promote the terroir of Roero with Arneis being their shining star as it had been given the high quality classification of DOC in 1989 and the highest qualification of DOCG in 2005.

Monchiero talked about how the dominance of sand in Roero soils and exposure to heat helped to produce a more aromatic Arneis wine with classic white flower and white peach aromas while still retaining a mineral quality. He also noted that it was interesting because we typically associate cooler weather with greater aromatics. As I tasted his wines, listed below, with a selection of his Arneis, I realized how sensitive it was to terroir – expressing different qualities from a site that had significant amounts of clay and sand compared to one that had mostly sand in the soil. Also, I was treated to Roero Arneis wines with age, being given one that was from 2001, to show the positive evolution of these wines.

My first experience with Arneis was with a high end example. But it was an eye opener to learn that there were many Arneis on the Italian market that were made in a mass production way – producing bland wines. And so, those who have had those wines may think Arneis is not a high quality grape. My perspective, even before my meeting with Monchiero, was that it was high quality but I just had problems finding more Roero Arneis.

This reminds me of how I met someone from another market recently who thought is was rare to have Lambrusco slightly sparkling (frizzante), and I found that odd because I have only known Lambrusco to be slightly sparkling. It was a great lesson that we all live within our own bubble of our individual market. I would have never thought to try a non-sparkling Lambrusco and now I’m seeking one out.

This brings me back to the importance of Roero having their own Consorzio, bringing attention to the group of winemakers who are living in Roero and devoting themselves to the expression of that place and especially to the striving for excellence with the Arneis grape variety. Monchiero even tasted me on his Barbera D’Alba DOC which was made from grapes completely coming from Roero. It was intensely aromatic with floral notes and spice. What is funny is that he said a wine made in the Langhe, with is clay dominant, can use the same Barbera D’Alba DOC but it will be completely different, again demonstrating the need to bring focus to Roero as a distinct place on its own.

I had spent a week before Vinitaly learning from the great Ian D’Agata at the Vinitaly International Academy who is the author of the award winning book Native Wine Grapes of Italy. It was an incredible learning experience that I am still continuing. But the main epiphany that I had during that course is that we have a lot more diversity surrounding us than we realize. Many lovers of wine are afraid that the wine world is becoming too homogeneous with a broad brush of Chardonnay and Cabernet Sauvignon painting the globe. But the diversity is still there… different terroirs that show the myriad styles of Italian varieties that exist, such as Nebbiolo, and those lesser known superstar varieties that have been neglected but are still there and in some cases, thankfully, local producers are placing their time and energy in bringing them back.

At the time of the writing of D’Agata’s book, he noted that there were 461 official Italian grape varieties registered. According to him, because of misidentification, and weaknesses in past identification of varieties, there are probably around 1000.

The problem is not lack of diversity, or local superstars; the problem seems to be that we are focusing so much on what we don’t have, we are missing out on the plenitude of diversity that still exists.

*I look forward to learning more about Roero at a seminar they are conducting in New York City in a couple of weeks.

A few of the northern Piedmont (Alto Piemonte) wines I re-tasted on the 10th of April:

-2011 Le Pianelle, Bramaterra DOC, Alto Piemonte, Northern Piedmont, Italy: Nebbiolo with Vespolina and Croatina added to the blend. Bramaterra is also noted as being the 2nd placed in Italy to bottle wine with Marsala being the 1st place. This wine was very elegant with whimsical notes of purple flowers and intense minerality on the nose yet it gave great flesh on the palate.

-2011 Castaldi Francesca, Fara DOC, Alto Piemonte, Northern Piedmont Italy: Nebbiolo with only a small amount of Vespolina and Croatina. This appellation only has three producers and so it is not prevalent on the market, even though I did find this producer in one wine store in New York City. Lots of generous red fruit with a savory dried herb quality and a saline finish. Love experiencing a salty quality with a red wine.

Tasting of Monchiero Carbone Roero Wines on the 11th of April:

-2015 Cecu d’la Biunda Roero Arneis DOCG, Piedmont, Italy: Coming from a soil with majority sand. Strong minerality with tropical fruits and creamy texture. Fascinating wine because you would expect more lean fruit and linear palate with a sense of minerality but this wine shows that you can have lots of ripeness with strong sense of place.

-2013 MonBirone Barbera d’Alba DOC, Piedmont, Italy: 100% from Roero, so a Barbera from soil that is dominant sand. Very aromatic Barbera with purple flowers and spice on the nose with black cherry flavor.

-2001 Printi Riserva Roero Arneis DOCG, Piedmont, Italy: Same wine as above but with 11 more years of age on it. Luscious body with dried thyme notes and Asian spices and stewed apricots with lively acidity that finish with fresh, concentrated notes of lemon confit.