Posted on January 26, 2019 by damewine
ShareTweet

The sun shining through the windows illuminated the image of a man and horse deconstructed into squares, triangles and rectangles. Lacking real human and animal lines, the figures seemed to be toy-like in their presentation making my brain process each section separately instead of assuming the whole and skipping the details. The stress that I held in my head melted away as I stood there looking at the nuances of something that was familiar yet foreign at the same time. I was transported out of my reality to a work that was at once calming and mysterious.

I was visiting the Center for Italian Modern Art (CIMA) in New York City where their exhibition “Metaphysical Masterpieces” was featuring various Italian artists’ work from 1916-1920. The metaphysical movement started when Futurist painter Carlo Carrà met Metaphysical artist Giorgio de Chirico in Emilia-Romagna, Italy, when they were both stationed there in 1917 during World War I.  Futurist artists emphasized speed, technology, violence and youth as they enthusiastically anticipated the world fiercely changing. Carlo Carrà’s world was drastically altered but not in the way he intended as he quickly found himself amongst the worst type of violence and change in the form of communities being obliterated; the meditative qualities of metaphysics that would, at one time, have been boring became a salvation for him.

Simple objects were transformed into dreamlike pieces under the Metaphysical philosophy of painting established by Carrà and de Chirico. Their works enabled the observer to escape and find peace in dreamlike images that were extreme contrasts from the brute force tactic of the illustrations of Futurists. As Carrà’s world quickly escalated from industrial aspiration to nightmarish turmoil, so did his focus shift in regards to the type of art he felt compelled to show the world. 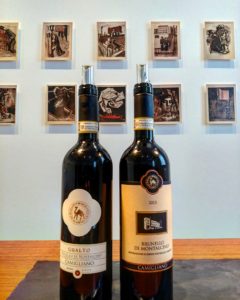 My Metaphysical art experience was combined with the introduction to the 2013 Camigliano Brunello di Montalcino and its Riserva the 2012 Gualto. Brunello has an interesting history because even though it was not officially designated as a DOCG (Denomination of Origin Controlled and Guaranteed) until 1980 – the first bearing a specific seal from the Italian government – it had been recognized as a superior wine for more than 100 years before its DOCG status. In 1869, Clemente Santi’s Brunello wine (he was founding father of Brunello di Montalcino) was awarded a silver medal from the Agrarian Committee of Montepulciano and a few years later, a report was released by The Grapevine Classification Board of Siena which stated that Brunello wines that were tasted from the 1843 vintage, which were 32 years old at the time, were “perfectly preserved”. 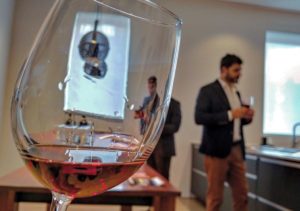 But Brunello wine producers’ ambition to show the quality of 100% Sangiovese made in Montalcino, Tuscany, had to be placed on hold. World War I and II took its toll and it would take Italy decades to recover – some areas never being completely repaired. Just like Carrà’s initial desire to bring Italy into the future with his works of art, that passion was replaced by the yearning to bring tranquility to the bleak reality of war.

Purpose Influenced by Our Times

Sometimes our personal ambition is superseded by the greater good for all depending on the state of our times. Whether it is those pillars of society that keep our communities going or those who are simply peaceful forces during tumultuous periods, it is often the people who ground us that eventually make future progress possible. Brunello di Montalcino was able to become one of the greatest red wines in the world because they were built on the backs of winemakers who were happy to do the work knowing that it would not be appreciated until after they were long gone. 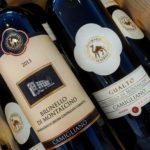 –2013 Camigliano, Brunello di Montalcino DOCG: 100% Sangiovese. Difficult vintage. A beautifully classic Brunello from a cooler vintage with layers of complex aromatics of cherry blossoms, rosehip oil and a stony minerality that is highlighted by a linear body with finely integrated tannins. 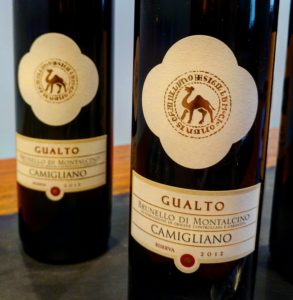 –2012 Camigliano, “Gualto”, Brunello di Montalcino DOCG: 100% Sangiovese. Considered a top vintage by many wine critics, the 2012s won me over even from their first release. This Camigliano Riserva lives up to this enchanting vintage with a stunning nose of espresso, dusty earth, fresh leather and fennel fronds with juicy black cherry and those mind-blowing silky tannins! Yes tannins that caress the palate with taffeta goodness. Camigliano’s elegant style is showcased well in this vintage.

The name Camigliano “the camel” comes from a seal that was found in a local castle that had a symbol of a camel on it. The seal is thought to date back to the 13th century and perhaps was connected to the influence of the papacy during those times.