Quality is Sustained Through Collaboration

Posted on February 24, 2019 by damewine
ShareTweet 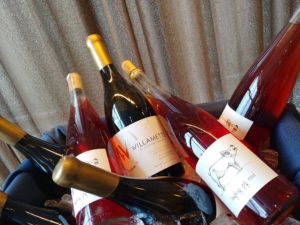 Collaboration is one of those things that many of us know is beneficial, but in some ways can actually be detrimental. The human mind is complex and through time, it is possible to have experienced so many interactions with others that chip away at our self-worth, making us want to continually prove ourselves which can cause friction within a group dynamic. Toxic competitiveness and the attitude that there can be only one winner can dominate our lives. It is tough to find the balance between working together for the greater good and fulfilling personal goals when we live in a free democracy (and I think the problems of a democracy is worth the freedoms we enjoy) that allows us to choose our own paths, since many times it seems like a binary choice between focusing on individual growth or focusing on the collective good. 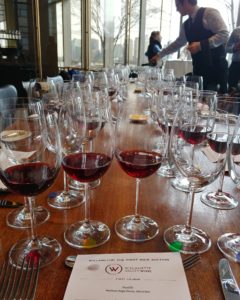 One of those rare collaborative havens is the AVA (American Viticultural Areas) of Willamette Valley in Oregon. It is no secret that their success with Pinot Noir wines was not only based on having the right climate for this finicky grape, but early in their founding, their decision to work as a community. A collaborative spirit cannot be faked for a significant length of time – after a while, the cracks start to show to the world. I have met so many people who put on the display of a ‘stronger together’ attitude but many times, the act of throwing a proclaimed friend or colleague under the bus when it benefits them makes it clear that the ‘together’ attitude is not heartfelt. As I have gotten older, I have realized that no matter how incredible a person or organization may seem from the start, it takes time to know their real intentions, and that at the end of the day, many of us only have a handful of people who we can depend on. 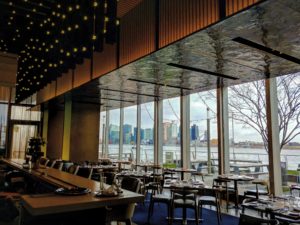 One of the best and worst things about living in New York City, or any major city I would imagine, is that you meet all types of people. Some have a ruthless attitude that they either hide, or in some cases openly flaunt, others are just trying to make their way in a tough environment with as few cuts and bruises as they can manage, and then there are those whose life is devoted to the community in which they live. I have found myself connecting to my own community as a source of grounding while learning to create strong boundaries in my work life.

Oregon is one of the places where it seems, for many, to be one of collaboration, in both personal and professional lives, as the foundation of their sustainability is forged from this philosophy.  For at least a decade, if not longer, I have been talking to Oregon producers who have done market visits to New York City. They truly do keep to that code of promoting each other, even when they are pushed by their distributor to only brag about themselves. I remember working in distribution many years ago and we represented one of the original founding families of Willamette wine. The producer was considered a ‘tough one’ to bring on appointments with wine buyers because they refused to only speak about their wines and they were insistent on promoting Willamette as a whole. Eventually this producer moved to a smaller distributor that respected their set of values. 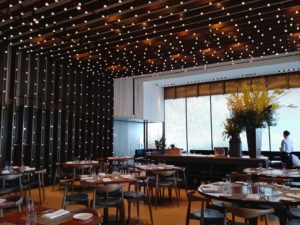 I got together with a couple of women who work in the Willamette wine scene back in January to discuss their fourth annual Willamette: The Pinot Noir Auction. Shirley Brooks, VP of Sales & Marketing of Elk Cove Vineyards, came to Oregon 25 years ago when she was studying to become a certified dive master and Eugenia Keegan, Oregon General Manager of Jackson Family Wines properties, found her way to the Oregon wine scene after she closed down her own wine brand in Sonoma County’s famed Russian River Valley.

It was an afternoon with refreshingly frank women who have been involved with wine and Oregon for at least a couple of decades – Eugenia started in wine back in 1976. Even bigger wine companies like Jackson Family Wines (Gran Moraine, Penner-Ash, WillaKenzie and Zena Crown Vineyard) or Burgundian négociant Drouhin have to bow to the collaborative will of Willamette; instead of these powerful wine enterprises changing the utopian alliance of the Oregon winemakers, these enterprises have to conform to the Willamette way of life.

At one point, when the Oregon ladies were asked about their inspiration for this auction, Eugenia said without missing a beat, “It is a complete rip-off of Premiere Napa Valley” – an auction only for the wine trade that will allow those in distribution or wine sellers (sommeliers at restaurants or wine store owners) to make special wines available to their customers. Premiere Napa Valley has raised large amounts of money that can be used to help Napa Valley Vintners to promote wines around the world and despite Willamette knowing that they won’t come near to the Napa auction numbers, they realize it is a good way to raise money and awareness. 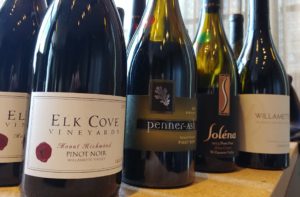 The Willamette Valley Wineries Association also sees a side benefit to the auction of getting the national wine trade out to Willamette to experience their beautiful way of life, framed by the charming nature of the area that offers adventure at every turn. This experience will be passed on to their customers that will hopefully inspire more wine travel to the area. But both Eugenia and Shirley stated that they are not trying to be Napa Valley, or Sonoma, or Burgundy or any other well-known Pinot Noir wine producing area. They feel that what makes Willamette special is its raw country splendor that no one dares to alter.

Grounded to the Earth

Eugenia made an interesting point that many other well-known new world regions focus on climate, and despite Oregon being great, weather wise, for Pinot Noir (a grape that has a narrow range of ideal temperatures), for them, it is all about the soil. Maybe that devotion to the soil is what grounds everyone to a collaborative mindset. Many of us have our own pockets of our personal community but I think it is rare, in these times, to have a group of businesses, large and small, stay true to the collaborative mission in a painful, slowly recovering economy – which is possibly teetering on another downward slide. But perhaps part of how Willamette producers keep the strength to stick together for the greater good is that they root themselves to the earth knowing that they have everything they need… and they pay less attention to the horizon that promises the false grandeur of self-importance.

Evening: Dinner Series: Winemaker Dinners at Wineries Around the Valley

Attendees by the Numbers

A brief explanation of a couple of interesting aspects of Willamette Valley soil, broken up into 2 types: Volcanic (Jory Soil) and Sedimentary (Willakenzie Soil); a 3rd soil – glacial sentiment – exist in Chehalem Mountains but was not represented in this tasting. The volcanic soils are said to add a spice and more red fruit character than the sedimentary borne black fruit profile, yet Shirley and Eugenia went further in explaining the structural differences. Eugenia explained their tannins/ overall structure variation in terms of music; wines from volcanic soils were like violins as they are tight, high acid, focused, with lots of energy and tension; wines from sedimentary soils were like the cellos as they are big and broad… they have reverberation. In the below lineup, the Elk Cove Vineyards and Penner-Ash Wine Cellars wines are from sedimentary soils and the Soléna Estate and Argyle Winery are from volcanic soils. Many consumers may not get the soil differences at first, as many of the entry level Willamette Valley wines are a mixtures of the main two discussed.

***Aperitif to get us into the Willamette mood 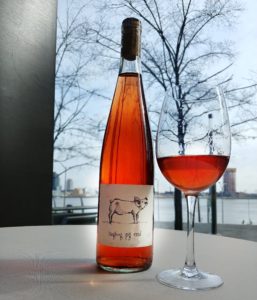 I discovered Big Table Farm over the past year and I am very impressed by this tiny producer from Willamette. Brian Marcy and Clare Carver are partners in life and in this winery – Brian is the winemaker and Clare is the artist who designs all their labels for each small lot, but they are both farmers at heart. Their wines are distinctive. Only 480 cases made of this wine.

***First set of wines that would not be available at the auction: 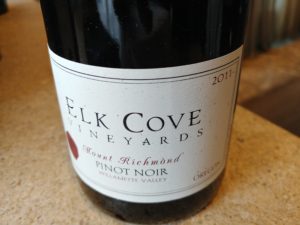 Founded in 1974 by Pat and Joe Campbell with their son, Adam Campbell, joining his parents to farm their 380 acres (154 hectares) sustainably across 6 separate estates in northern Willamette. 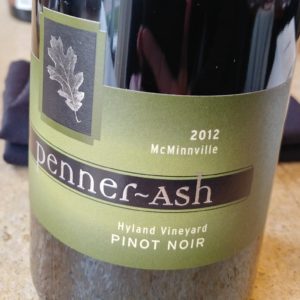 –2012 Penner-Ash Wine Cellars, Hyland Vineyard, Pinot Noir, McMinnville AVA: 100% Pinot Noir. Black cherry with a zing that had dried herbs and a rich body that finished with a floral lift. Only 190 cases made.

Founded in 1998 by wife-and-husband team Lynn and Ron Penner-Ash specializing in Pinot Noir, Syrah and Riesling from the northern Willamette Valley.

–2013 Soléna Estate, Zena Crown Vineyard, Pinot Noir, Eola-Amity Hills AVA: 100% Pinot Noir. Ripe raspberries with smoked paprika that was linear with fierce energy despite having plenty of fleshy fruit from this warm vintage. Only 199 cases made.

Laurent Montalieu is a much beloved character filled with passion that has helped shape the Oregon wine scene. Laurent was raised partly on the Caribbean Island of Guadeloupe and partly in Bordeaux, France, and he eventually found his home in Oregon in the late 1980s. Laurent purchased this property to celebrate his marriage to his wife Danielle in 2000. Soléna is the combination of the Spanish and French words Solana and Soleil, and the name that Laurent and Danielle gave to their daughter.

***Second set of wines that would be sold at the auction:

-Lot #36 – 2014 Argyle Winery, ‘Lone Star’, Pinot Noir, Eola-Amity Hills AVA: 100% Pinot Noir. High toned fruit that leapt from the glass and it sang with floral enticement and beautiful brambly fruit that was focused until the finish. The lot size is 10 cases.

In 1987, Argyle was founded on the idea that cool-climate Willamette Valley was ideal for producing sparkling wines and they are well-known to Oregon wine lovers for their sparklers, but this wine proves that they can produce elegant still wines as well.

-Lot #66 – 2016 Gran Moraine Winery, ‘Terminal Moraine’, Pinot Noir, Yamhill-Carlton AVA: 100% Pinot Noir. This wine is an ‘iron fist in a velvet glove’ with an elegant body that is packed with lots of aromatics and flavors of dried cherries, pressed flowers and crumbled earth that is all at once silky smooth and riveting in its delivery. The lot size is 5 cases.

Grand Moraine’s vineyard is located in the Coast Range foothills at the wild western edge of Willamette Valley. Some of their beliefs include LIVE certification, reducing yields as much as possible, picking fruit at the cusp of ripeness and using native ferments.

-Lot #6 – 2016 ‘The Pioneer and the Punk’ Chardonnay, Ribbon Ridge AVA: 100% Chardonnay. Golden apple and white peach with almond paste and toasted cardamom pods are lightly interwoven within the bright fruit that articulates itself with finesse. The lot size is 5 cases.

This is a joint venture of only 5 cases made of Chardonnay from Willamette’s smallest AVA, Ribbon Ridge. The producers Bergström and Adelsheim teamed up to blend the best of each one’s Ribbon Ridge estates.

Quick Notes about Vintages in Willamette:

2012 a moderate vintage with good weight

2012 has more generosity at this time