Real Leaders Know to Fortify All Boats to Ride the Tides 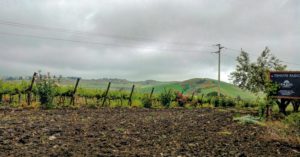 I’ve always liked the aphorism “a rising tide lifts all boats” which is associated with the idea that if a group focuses more on the whole rather than the individual then all will benefit. Although placing a general focus on trying to improve an economy as a whole, considering all the various levels of social stratification and whether thinking of a region or country, is certainly a good mindset, it does have its issues with many still falling through the cracks of the system. And so it takes real leaders to help strengthen, or fortify, those individuals who have been given very little chance in life to eventually help themselves; leaders who have the courage and desire to take on the challenges that come from taking responsibility for everyone in their community.

When I was young, in my early years in New York City (NYC), I originally had no support system… no family, no resources, and no guidance. I was an 18 year old that knew nothing of how to navigate through life and found myself in a lower income NYC neighborhood surrounded by strangers. When I first came to the city I felt like I had so much adrenaline stemming from the pure excitement of being in one of the greatest cities in the world that I was able to get past many of the challenging obstacles initially… but through time, that energy starts to fade and the barrage of various difficulties, amplified by living a life without any support system or direct leadership, became almost unbearable at times.

Yet there were moments when I was at the end of my rope when my community helped me… the times they waved my fees at my local health clinic, the times my neighbors in my tenement apartment (who had a lot more responsibilities than I did and barely got by themselves) shared their food, and the multitude of times that someone with a great education, incredible mind and fierce talent was willing to teach me a myriad of things that have allowed me to be where I am today. I realized during that time the importance of community and despite not everyone having the wiliness to help themselves, many of us who were lost kids benefited from those “leaders” who helped to fortify us so we could pull ourselves up by our own bootstraps. 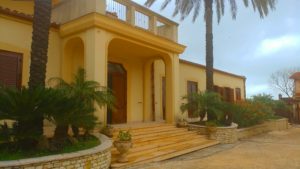 When I visited Fazio Winery in the North-West of Sicily, Italy, I had a feeling right off the bat that they were leaders in their Trapani province and were key in building the Erice DOC reputation to receive such a respected wine quality designation. Erice is not only known for its historical significance and culture as being an ancient town that was  once a key medieval citadel in the Trapani province, it has also become a center for scientific research and Fazio has certainly assumed the mantle for advancement in viticulture and winemaking.

As a family business, Fazio has transitioned as the second generation focused on improving wine quality not only at their own winery and vineyards but working with other grape growers in the area. Lilly Ferro, our guide for the day, said that her parents-in-law started the company 60 years ago. In the 1980s, her husband along with brother-in-law and winemaker Giacomo Ansaldi made the commitment to focus on quality in every aspect. They have around 247 acres (100 hectares) of their own vineyards and they work with other growers that add another 741 acres (300 hectares). They don’t just buy the grapes from the growers but they come in and analyze the soil, aspect and topography and determine the best vines and management for each vineyard. 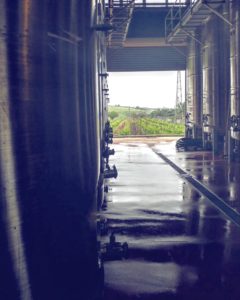 As we walked through their extremely modern and updated winery that handled every step in the process, including the vitally important bottling procedures, I was impressed by their experimentation vineyards dedicated to trying out recently discovered indigenous (autochthonous) varieties of various clones (biotypes) that would be a benefit to the area as a whole. When we had our tasting of the Fazio lineup, I happened to sit next to the woman,Valentina Console, who designed the labels and she said that the wines inspired the various labels. Her thoughtful creativity was evident and it was wonderful that she was given the support by Fazio to allow her artistic gifts to shine.

Throughout this trip I kept thinking about this winery, how the language was always pointing towards not only Erice DOC’s potential, but Sicily’s potential as well. 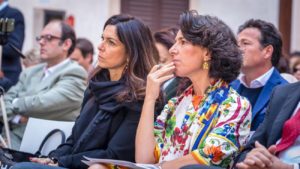 My last couple of days in Sicily were spent at the 2018 Sicilia en Primeur in Palermo – the newly anointed “Italian Capital of Culture.” My days were spent attending various Sicilian master classes and tasting a plethora of wines, as well as interviewing producers coming from all over Sicily. Throughout my time there, I kept seeing Lilly Ferro and I was always impressed by her passion to help the entirety of the Sicilian wine producers. Whether it was her talking about other producers she was impressed by during the master classes or her intense focus during the discussions of how the Assovini Sicilia (a group of small to large size wine producers) can improve the situations for all wine producers in Sicily, she was there with an obvious passion for strengthening the community; by the way, she is on the Assovini Sicilia board of directors.

At one point, we were standing by the espresso bar at the Sicilia en Primeur and Lilly said that I should try a biscotti-like square because it was made by boys who had behavioral problems – she said it was important to give them some sort of skill, some sort of chance. In that moment I had an intense vision of the series of points in time where people gave me a chance – a chance to survive and thrive… that I found myself many years later in Sicily on a wine press trip writing about wine and living a life more fulfilling than I could have imagined seemed liked a “pinch me moment” of joyous disbelief. Sooner or later, all of us need to be able to handle the tides that life will throw at us, but we do not come into this world already fortified for the severe impact that some of those tides will carry… that is where leaders like Lilly Ferro and her family’s winery Fazio become essential to help us to strengthen our own boats, so everyone will have that opportunity to build a life with a few pinch me moments of joyous disbelief. 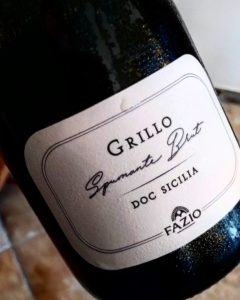 Grillo is a crossing between Catarratto Bianco and Zibbibo (Muscat of Alexandria) in Agrigento, Sicily in 1869 by Baron Antonio Mendola and has become one of the most important white grape varieties showing incredible potential as a variety that can display a range of aromatics as well as body weight with always fresh acidity present. 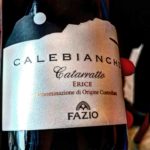 100% Catarratto. Blanched almonds with lots of salinity and chalky minerality that had a long citrus-y finish. 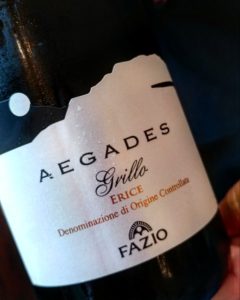 This Calebianche label, as well as the wine below, Aegades, is to give the feeling of island life in Sicily: the sun and the sea with the waves. 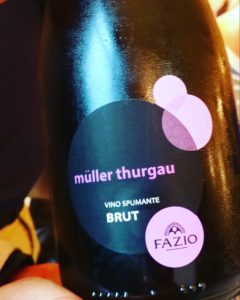 Fazio has received a lot of acclaim for this wine which comes from a single vineyard grown on top of a hill (around 1640 feet (500 meters) above sea level) and these are the first vines harvested around the end of July, beginning of August; there are also swings of temperatures that can be as great as 20-25 degrees difference between day and night during the summer… this creates a wine with ripe fruit, fresh acidity and a sense of minerality and place. Although it is not an indigenous variety of Sicily (Müller-Thurgau is a crossing created in Germany) Müller-Thurgau has certainly found a home in Erice DOC. 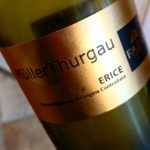 –2017 Müller-Thurgau, Erice DOC: 100% Müller-Thurgau. Flinty minerality with orange blossom and marked acidity that had lots of energy on the finish. 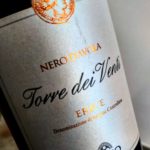 Although Fazio has a focus on indigenous, single varietal expression, this bottling shows the sense of place of the Erice area with a mainly Bordeaux blend that is Sicilian style with the Nero d’Avola added. The Cartesiano label shows the old vines that are prevalent in the Erice DOC area. 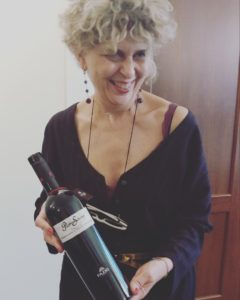 The fabulous woman, Valentina Console, who designs all the wine labels for Fazio holding the PietraSacra.

–2010 ‘PietraSacra’, Rosso Riserva, Erice DOC: 100% Nero d’Avola. Fazio’s “Elegant Reserve” of one of the most important Sicilian varieties – the king – Nero d’Avola. Sour cherry, lots of fun tang with a hint of spice and added complex notes of chestnut and juniper along the well-structured body and long, expressive finish.

The grapes come from their “premier cru of Erice DOC”. This wine sees French oak but the winemaker Giacomo Ansaldi constantly checks on the barrels to make sure that the oak is only helping to express more of the variety and sense of place and not overpowering the wine itself.

Tasted during Dinner Later that Night: 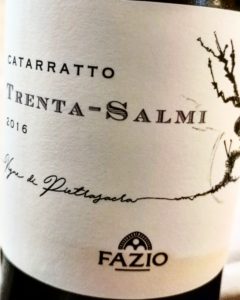 –2016 ‘Trenta-Salmi’, Catarratto, Terre Siciliane IGT: 100% Catarratto. From old bush vines that are over 60-year old that give a low yield. This is the only dry white wine that uses oaks – fermented in barriques. A stunning wine with nutty, crumbly rock notes on the nose and becomes wide and rich with tropical fruits on the palate that finish with a lifting hint of sea breeze.