Winemakers Pray to the Soil

Posted on April 29, 2018 by damewine
ShareTweet 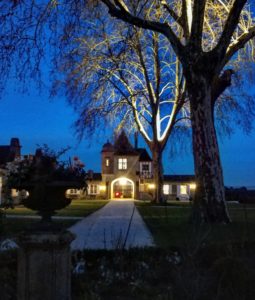 The opaque, sapphire sky was partially lit up in our little piece of nirvana. The bare branches on the trees slightly drooped down to help create a canopy of light that was shone from the Perigord-style building in the distance. As I slowly walked along the pebbled path, I was overwhelmed by the whole scene: little flowers highlighted in the ambient light combined with our divine natural awning; I felt how precious it was to experience their beauty in an amplified way. It made me think of all of those people, who were not necessarily religious, but who prayed to nature everyday, many of them winemakers, many of them lived in France.

I was finishing my evening at the Second Growth, Château Rauzan-Ségla, in Margaux, Bordeaux – a special wine growing area in France. A second growth that has always had the great terroir of clay-gravel, encompassing the much sought after 4th terrace with fine, deep gravel underlying a significant portion of their plots – near the legendary Palmer. In the past, Château Rauzan-Ségla sat in the shadow of its acclaimed neighbor Château Palmer, but since 1983 there has been an influx of investment from owners, such as the current proprietors, the Wertheimer brothers (owners of Chanel), that wanted to bring this estate to its original glory with the 2016 vintage already showing some outstanding characteristics out of the gate; and although I haven’t tried the 2015, many wine colleagues have been raving about that vintage as well. It is certainly impressive that their 2017 was a top wine as well since it is a vintage with varying quality levels, but Rauzan-Ségla is on the up side of that curve.

During a work trip to Bordeaux to mainly focus on the 2016 vintage, I was invited, along with other wine writers, to visit the Rauzan-Ségla estates with a tour of the cellars, tasting, and a gala dinner that was elegant yet relaxed as we lounged on big, comfortable couches (designed in fantastical patterns) sipping our 1986 Rauzan-Ségla.

Nicolas Audebert, the managing director, was our tour guide, who emphasized that their focus in the cellar was to enhance what was in the vineyards, and Rauzan-Ségla has some impressive soils that date back to 1661. They have around 185 acres (75 hectares) with 173 acres (70 hectares) in production. There are over 200 different plots that have been designed for various reasons: variety, clone of that variety, small change in composition of soil, and age of vines. Actually, they do over 200 individual vinfications and have that many pieces of any particular vintage orchestra to compose a symphony; hoping one day it will be talked about with cherished memories for decades to come.

The Miracle is in the Moment

I had one of those moments while the words of Nicolas Audebert landed deep within my consciousness as I tasted their 2016 and 2017 samples; the powerful silky textures, the beguiling aromas, the enticing flavors… the energy, the spirit, the life.

Before I knew it, I was outside walking away from the château and seeing the same picturesque setting as the one that I first encountered just a handful of hours earlier, but this time in a blanket of darkness with the few up lights helping to guide our way. I found myself lagging behind the group, kneeling on the ground, thinking about these winemakers and how they prayed everyday to their soil; I picked up a few pieces of dusty earth and thought about how so many living things are brought into this world, as well as taken, from what I was holding in my hand in that very moment. It is truly a miracle anytime we or anything else are living, such as the little flowers I could see around, thriving in the cold, damp air, or the leafless trees that would soon enough be covered with multicolored foliage; so many miracles that surround us everyday but we are just a prisoner to the grind of our life that often times we are not able to appreciate it… except for those few moments, such as walking away from a night of great wines, when we are grateful to still be alive.

Disclosure: Millésima paid for my travel and first two nights stay in Bordeaux.

Château Rauzan–Ségla Tasting in the Cellar on March 26th, 2018 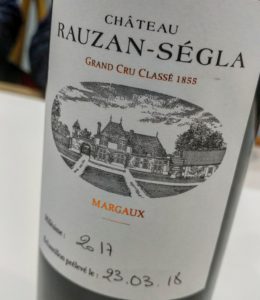 2017: 62% Cabernet Sauvignon, 36% Merlot and 2% Petit Verdot. The wines in 2017 vary greatly and so one needs to do their homework and choose wisely. This Rauzan-Ségla is a rock star for the vintage and is already lush with ripe blackberry fruit and intoxicating smoky minerality and floral notes with a long, bright finish. It had already gone through MLF and Nicolas Audebert noted that their wines typically go through malolactic fermentation early. 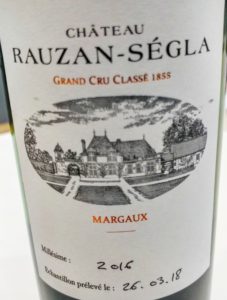 2016: 68% Cabernet Sauvignon, 30% Merlot and 2% Petit Verdot. Blueberry pie, spice and fresh sage with finely knitted tannins. I was completely seduced by the generosity of juicy fruit and spice with this 2016 Rauzan-Ségla…. already singing at this stage; a winner out of the gates! 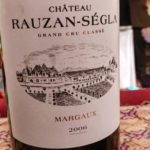 2006: 53% Cabernet Sauvignon, 44% Merlot and 3% Petit Verdot. This wine was a pleasure, with well-integrated tannins (not all 2006s are overly tannic) and good amount of concentration with cassis, black plums and smoldering earth. 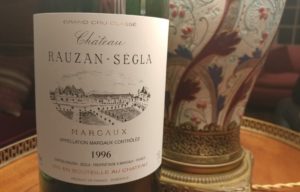 1996: This wine offered a lot on the nose with a bouquet of lilacs, rose water, orange blossom and raspberries. It was more restrained on the palate with etched tannins and an expressive finish. 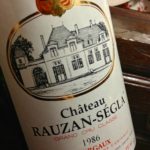 1986: This was the wine of the night and a great example of one of those dangerous libations that can start an addictive habit of wanting to only drink older Bordeaux. It’s not so easy to still find wines from the 80s that are still performing this well. So Bravo! Enticing notes of truffle with forest floor, saline minerality and sweet tobacco with plenty of dried red cherries to flesh it all out. It has a graceful presence with finely-sculpted tannins along an extraordinarily long finish. I have a feeling it’s towards the end of its peak, but what a way to go out. I would like to leave this life with such grace.