The Edgy Side of Valpolicella

Posted on March 1, 2017 by damewine
ShareTweet 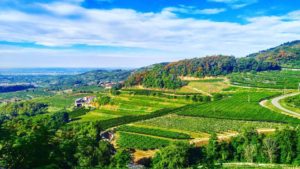 The classic wines of Valpolicella are often times associated with traditionalist drinkers who are not risk-takers in their wine drinking habits. For the price, Americans would rather pull the trigger on other rich, robust wines, such as Napa Cabernet or Châteauneuf-du-Pape, before buying an Amarone della Valpolicella DOCG. The more value-oriented Ripasso della Valpolicella DOC does better in export markets yet its characterization of being a ‘baby Amarone’ is erroneous since an Amarone will always have qualities that a Ripasso cannot possess. Then there is the easy drinking Valpolicella DOC which has prejudice that it is a “go to quaffer” when one does not want to think too much about what they are drinking.

Besides the fact that there is a wide range of quality within this winemaking DOC that has both good and bad representations, Valpolicella is starting to show some edge to these classic wines. Last September, the Valpolicella Consorzio Tutela Vini provided me the opportunity to visit fourteen wineries and mainly focus on the classic, DOC wines of the area. I must admit that, initially, I was looking forward to seeing the renowned beauty of Valpolicella more than actually tasting the wines of the area, but I was surprised by the experimentation and pure vitality of some of the wines, and walked away feeling that a few producers are edgy enough to thrill even the cool kids in the wine world.

Anyone who has even the slightest interest in what is hot in Valpolicella knows Zýmē winery. Celestino Gaspari is the well-established rock star of the area. His Harlequin IGT has seen worldwide acclaim with its makeup of a minimum of fifteen grape varieties, ranging from white to red, Garganega to Marzemino, and its stylistic markers of thick extract, long barrique aging and high alcohol – a signature of many of his other big reds.

Although many wine lovers may never be able to afford a bottle of Harlequin, its legend helps to propel the rest of the Zýmē portfolio. I was certainly excited to visit this winery, taste their full range of wines, especially the big reds, and at the end, to have an opportunity to meet Gaspari himself.

Surprisingly, it was not the Harlequin that kept me thinking… don’t get me wrong, I’m always happy to drink a USD$400 bottle of wine for free (as well as the too cool for school 100% Oseleta wine), but it was his Valpolicella DOC “Rêverie” that I kept obsessing over. In the past, I had always taken pride in being a true wine geek, especially a female one, who preferred a more “serious” red wine, and so it was quite odd that I was at Zýmē thinking about their Valpolicella, and their “junior” one at that!

But the “Rêverie” was impressive, with wild strawberry, savory spice, floral notes and mouthwatering acidity that was balanced with fleshy goodness on the palate. The aromatics rolled around in my head for the rest of the day and I found myself missing it when it was no longer there. 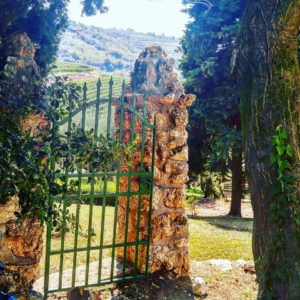 When visiting wineries in Europe, many times, as an American, I expect to find producers that have a story including a multi-generational wine history. Of course, that has been changing, and it was great to see one such exception in historical Valpolicella, with a young woman no less.

Massimago was started by Camilla Rossi Chauvenet in 2003. She had an infectious excitement that touched every aspect of her business, from the construction of her drying room on top of a steep hill that was inspired by Japanese construction (the architect eventually became her husband, but she had wished they were betrothed before they negotiated the price for the construction) to the “ironic” idea of the name Massimago, an old time magician and cultural icon that has the right amount of kitschy feeling that young people gravitate to these days. Then there was her reverse feminist idea that Amarone was only for men and Ripasso only for women, which was illustrated by pictures of different “types” of men on the label of their 2011 Conte Gastone Amarone della Valpolicella DOCG, and the female version on their 2013 Marchesa Maria Bella Valpolicella Ripasso. Again, the irony continues because being a cultured youth today means that one does not believe in stereotypes or separate men/women’s versions, and so these classic wines have a touch of youthful paradox. But there was nothing ironic about the taste of these wines, both expressing more stewed fruit notes rather than desiccated ones, and bright flavors with touches of sweet spice. It was fitting to have the tasting/lunch outside, picnic style, as they were fresh wines that had a fresh approach made by an owner with a fresh face. 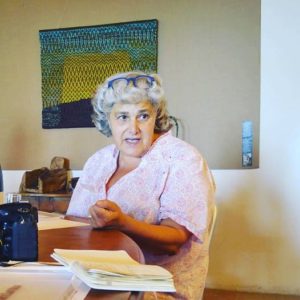 Who would have ever guessed that one of the most cutting edge producers would look like the quintessential Italian grandmother? Well, in Valpolicella, Corte Sant’Alda is one of only a few certified biodynamic wineries, and it is led by the outspokenly direct Marinella Camerani. When asked about the reasons for becoming organic, and then eventually biodynamic, she simply said that she is the kind of person who likes to take care of people around her, henceforth, it was a natural progression into these practices. Also, in an unusual statement, she said that she didn’t think the wines have benefited since becoming biodynamic – although someone else (who was very familiar with the history of these wines) quickly chimed in that she thought that there was a big difference.

Corte Sant’Alda is not only rare because of their biodynamic certification but they also use a small amount of cherry wood that was said to give a lifting “mint” note to the wines. The 2011 Amarone della Valpolicella was unique, in my experience, with wild cherry and tropical notes that had a bewildering hint of sage that did not make sense from my experiences with Amarone, yet I was intrigued and wanted more. It was a fitting end to our visit when she told one of my media colleagues that she was not happy with the 2011, while being interviewed on video. My colleague hastily tried to change the subject (we enjoyed that wine) but to no avail, she was going to talk about her disappointment in the 2011 whether he liked it or not!

Finding the Edge While Keeping the Warmth

Valpolicella finds itself in an interesting conundrum. Although the Consorzio wants to encourage innovation, they, rightfully so, don’t want the producers to completely abandon the classic wines that originally brought success and prestige to Valpolicella, simply because they have currently fallen out of fashion. Vice versa, they don’t want to give up on finding innovative methods that improve the classic wines simply because they are afraid of change.  In a way, it’s like the political situations currently happening in countries such as the UK, and yes, my home, the US. There has been so much frustration over slow economic growth that there are groups on both sides that want to either completely throw out the traditional mindset, or throw out recent progress made in their respective societies – turning back the clock. It may bring some type of immediate change but at what cost? I just hope that Valpolicella finds a better way to balance their two sides, edgy modernization versus traditional comfort, than the current state of our politics.