From Uruguay, With Gratitude

Posted on February 28, 2017 by damewine
ShareTweet

My first experience tasting a wine from Uruguay was over 7 years ago, while studying for the WSET (Wine & Spirits Education Trust) Diploma. I must sheepishly admit that up until that point, I did not even know Uruguay (the country!) existed, as I did not really learn world geography until I started to formally study wine. As a previously Europe-centric wine professional in New York City, I knew all about Madiran Tannat from the South West of France and its importance in the development of a winemaking technique called micro-oxygenation, but outside of that I did not pay the Tannat grape variety much attention.

During the WSET courses, it was not only interesting to learn a bit about Uruguay, but it was also surprising to know that the ever harsh, tannic, astringent and rustic Tannat grape variety is their national variety. This was remarkable considering the few wines that I tried, as a wine student, stirred an endless barrage of jokes that entailed the enamel being peeled from one’s teeth. Although my exposure to Uruguayan Tannat was memorable, it was short lived. 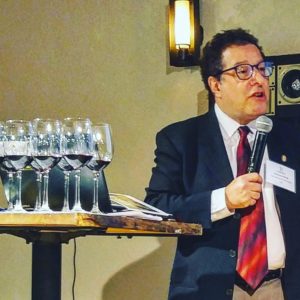 This past September, I had the opportunity to attend the “Taste of Tannat” tour of the Wines of Uruguay, led by the informative and entertaining Master Sommelier Evan Goldstein. To be honest, I probably would not have bothered to attend this seminar were it not for Goldstein’s name attached to the invitation. But I thought there must be a lot more to these wines than I had previously thought, if he was to extend his name to this lesser known winemaking country.

Why have European wines had such a long popularity with top wine consuming countries? Yes, European countries have a well established wine making and wine drinking culture, but I believe it is the positive images that we relate to Europe that has sustained their reputation. Whether it is the image of relaxing in the beautiful countryside, living in a Metropolitan city among sophisticated, cultured people, or sitting around a big table with a large, loving family – many of these images may not be entirely true, but no matter, that is our association. We want that idyllic “European” life for ourselves and so we support it.

What do we think of when we hear Uruguay? Well if you know it is in South America then you are already ahead of the game. But even the most worldly of people may have a backwards idea about Uruguay – that is it a patriarchal society stuck in the dark ages with little regard for women. Well, this is far from the truth, as some of their laws show an open minded, liberal society (same-sex marriage and marijuana are both legal), and there are impressive, strong women – some of whom were representing their families’ wineries at this tasting.

Happily, I can say that the wines tasted at this seminar were significantly better compared to my first encounter years ago. I will also admit that I was completely shocked with the well-managed tannins and a wide array of styles of their Tannat wines. Some had more grip and structure than others, but none of the wines showcased in the seminar were too ‘polyphenolically driven’. Did I just make up a new wine term? Yes, yes I did. 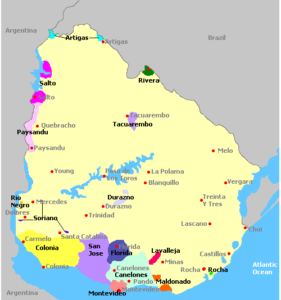 Not only did I not have any issues swooshing nine wines that were comprised predominantly of Tannat, I actually found some of them outright enjoyable and exciting. The 2014 Bodega Garzón Tannat Reserva from Garzón in Maldonado (currently the hottest wine area in Uruguay) had a wonderful balance with a touch of sweet, desiccated fruit, moderately firm tannins and good flesh on the body that just made this wine incredibly generous and approachable. Conversely, the 2013 Marichal Tannat Reserva from Echevarria, Canelones (where the majority of vineyards are planted) had a more restrained, earthy style with an intense gravelly rock note and fresh black fruit that had overall more finesse with fine tannins.

Why such a big change in quality since my first experience with Uruguayan Tannat?

This seminar addressed some of the previous issues which made these wines more rustic than charming, including limited access to quality clones as well as a lack of knowledge and resources when it came to practices in the vineyards and wineries. Better clonal selection and utilizing a deeper understanding of this variety with yield management, pre/post-fermentation, and, surprisingly, minimal micro-oxygenation, has paid off with more balanced wines. Most of these changes were momentously implemented in the mid-2000s, so only recently has a significant impact on their “fine wine” industry been perceived.

It was nice to learn more about Uruguay’s socially liberal attitudes and to experience, first hand, a tremendous increase in their national grape variety’s quality that once was considered a lost cause for a single varietal wine. But more than anything, as I think back to that seminar, what touched me most was the authentic and deep sense of gratitude. Each producer who presented their wine gave a heartfelt thanks to Goldstein. They thanked him for the opportunity to tell their story, show their wines and inform key export markets of their commitment to quality winemaking. Many expressed that, prior to his attention, they felt that no one knew of their existence let alone all the hard work they have placed into their wines.

Exactly twelve days after this seminar, I witnessed an interesting exchange when attending a wine dinner for completely different wines from a different country. At the end, the importer asked an attendee, “Was everything to your liking?”  The person replied, “Yes. I am grateful for the opportunity to come”, to which the importer said, “That is a great word to hear. Grateful. People do not say that enough.”

Grateful for the Lesson

Those of us who live in big urban jungles, where the pace never stops and we yearn for peace, sometimes forget what it is like to be tucked away in an area of the world where there is almost little hope of being noticed. A place that is invisible to the rest of the world. The Uruguayan producers’ gratitude was no act or PR stunt because I could feel that it came from their guts, it came from a place within them that almost gave up hope… and so it was a great reminder that I have so many things to be grateful for… and I am grateful that I was given a chance to challenge my own ignorance about Uruguay and their wines.

Celebrating Wine, Life and Inspiring Colorful People in New York City and Beyond!
View all posts by damewine →
This entry was posted in Dame Wine and tagged South America, Tannat, Uruguay. Bookmark the permalink.