Posted on December 21, 2016 by damewine
ShareTweet 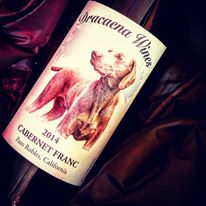 Recently, I greatly enjoyed participating in #CabFrancDay on Twitter.  This day was founded by Lori Budd of Dracaena Wines and it takes place on the same day each year, December 4th, for reasons that Lori illustrates in one of her posts. In the well-regarded book, Wine Grapes , Cabernet Franc is said to be “undoubtedly one of the most important and ancient varieties in the Bordeaux region”, yet it has been extremely underappreciated for a variety that has such a noble history. How did it become the forgotten father of its superstar son, Cabernet Sauvignon?

It can be argued that Sauvignon Blanc suffers from the prejudice that red wines are of inherently higher quality than white wines – although it is interesting to note that the one quality that has given Cabernet Sauvignon such acclaim is also a marker for its white mother: “What is remarkable about Cabernet Sauvignon is that it imprints its identity so firmly on any wine that includes it…” –Wine Grapes

Cabernet Franc, on the other hand, is a red variety that is part of the esteemed legacy of Bordeaux. Even though it plays a small part in the blends of Left Bank Bordeaux, it certainly found its home in Saint-Émilion (Right Bank Bordeaux) although it does play second fiddle to Merlot in blends. Château Cheval Blanc is the best example of what Cabernet Franc can bring to a blend since, for most vintages, it is the dominant variety. Clive Coats, wine writer and Master of Wine, described Cheval Blanc as “the only great wine in the world made predominantly from Cabernet Franc.” It is one of only four producers that have the highest ranking in the Saint-Émilion classification with the status Premier Grand Cru Classé (A).

But what about single variety Cabernet Franc? Or at least a blend that is made with a significant amount of Cabernet Franc, as it seems Cheval Blanc uses, at most, 60% Cab Franc. 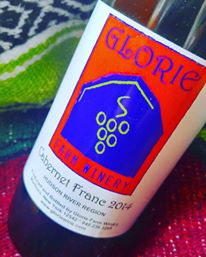 The cooler area of the Loire Valley, France, has been making single variety/Cab Franc dominant wines for ages. I have certainly had some lovely examples from Chinon and Bourgueil yet a variety cannot become a global success unless other areas around the world are growing it. And so, its long established association with cooler weather, as well as it being a mid ripening variety (Cabernet Sauvignon ripens later) and its less tannic nature, makes it a nice variety to grow in other cool climates such as the Finger Lakes in New York and the much lesser known Hudson Valley. I was excited to try my first Hudson Valley, New York, wine for #CabFrancDay, Glorie Farm Winery’s 2014 Cabernet Franc. It showed a nice balance between Old World fresh autumn leaves, and New World fresh black currant fruit. 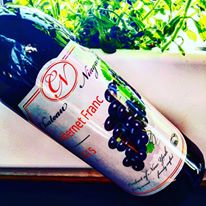 But the tendency to plant it in cooler climates may be an issue for Cabernet Franc since, in these conditions, it makes lighter, less “show stopper” type wines that can verge on being austere and unpleasantly green. Actually, the first red wine I tasted in my #CabFrancDay lineup was a wine from Niagara called Chateau Niagara. I have to admit that I knew it was going to have a pretty nose (well made Cab Franc can produce stunning aromas) due to the good things I had read while researching this producer but I was afraid that the palate was going to be lacking with a thin body. Well, happily I was wrong… about the palate that is… the wine had a pristine raspberry nose that was perfectly balanced with a juicy body and a hint of wet stones on the finish. The owner, Jim Baker, who joined us on Twitter for our discussion, said Niagara gets “less tannic, more medium bodied wines with substantial red fruit.” He also emphasized that Cabernet Franc can range in character depending on how it is treated in the vineyard.

All of us know the importance of Cabernet Sauvignon. When a New World winemaking country wants to be taken seriously, they plant this noble red grape variety. When its parentage was revealed, it seemed to turn the wine world on its head… almost on the same level as when Darth Vader revealed to Luke Skywalker that he was his father in Star Wars: Episode V – The Empire Strikes Back. It will certainly go down as one of the greatest cinematic reveals of all time. I can remember feeling stunned… I was a very young child who, for the first time, consciously realized that the world was a lot more complicated than I once thought.

There is no doubt that Cabernet Sauvignon has the right to be considered a great variety but its own father seems to be considered nowhere near its greatness. There are many factors that could have contributed to the modern day impression of these varieties. First, it is easier to make more structured and darker colored wines with Cabernet Sauvignon, which automatically gives a serious profile to its wines. The typically high acid and significant amount of tannins assist in making the high quality versions ideal for ageing – giving it more validity for its greatness. And, it was fortunate enough to be taken seriously hundreds of years ago, in Bordeaux, and hence has had a large amount of time devoted to the best practices for its growth in various types of vineyards and its handling in the winery. 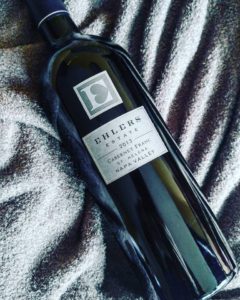 Napa Valley, California, is one of those New World areas that has spent a large amount of resources and time on the production of Cabernet Sauvignon. But it is nice to see them placing some of that focus on Caberent Franc. My lineup for #CabFrancDay had two wines from Napa Valley. One was a 2013 organic 100% Cab Franc from St. Helena in Napa by Ehlers Estate that had silky tannins, rich black cherries and a nice sense of place. 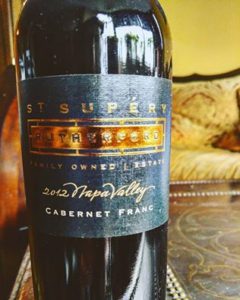 And to show the diversity of Cabernet Franc, the other Napa wine, 2012 St. Supéry in Rutherford, had more cassis and chocolate notes yet the cooler 2012 vintage was evident with marked acidity. Both wines showed brilliantly and made it obvious why, during a Master Class I attended recently about Oakville wines in Napa Valley, one of the winemakers, Peter Heitz – winemaker for Turnbull Wine Cellars – said he thought Cabernet Franc was the future for Napa Valley.

As people, we seem to have a need to concern ourselves with the stories of our parents. Whether they are our biological, adoptive, or in some cases step-parents or grandparents raising us, it becomes a mission to understand ourselves better, to either live up to or to avoid certain values, and to either succeed by becoming even 1/10th of the person they were or to learn from their mistakes and to evolve to a better path. Sometimes it is all of those things or sometimes it is not so clear at all what we need to resolve.

That is one of the reasons why I love Star Wars. Yes, it can seem like a simple, childish movie that has mediocre dialogue, acting, and, in the original films, sub-par special effects (by today’s standards). But it is the arc of Luke Skywalker that gets me every time. He is an inherently good young man that is faced with the fact that his father is one of the worst villains of all time. This knowledge makes him question himself and his own tendencies to lean towards the dark side… and through time, his strong feelings to protect his friends are used to inflame anger that brings out his worse fear… he is capable of going to the dark side by committing an unbridled act of violence.

But Luke never gives up hope that there is good in his father, and Darth Vader, with his last breaths, redeems himself and proves to Luke that he was right – there was still good in him. Of course, this is a movie, a fantasy that does not always play out in real life. But it makes one wonder, when you see the flash of goodness in Darth Vader (aka Anakin Skywalker) before he dies, that if he could have avoided certain horrific tragedies so early in his life, then perhaps he would have become a great force for good – the greatest Jedi of all time.

I think many of us can’t help but think the same thing about certain people in our own lives…often times we think of parents, not that they are villains but that they had unreached potential, if they would have taken a different path then perhaps they would have been capable of greatness. The same can be said for Cabernet Franc.

A Chance for Redemption 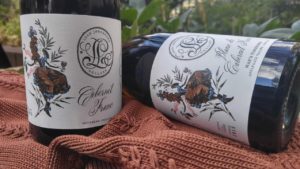 Unlike human beings, noble varieties such as Cabernet Franc can be given many chances, so long as there are quality wine producers singing its praises.  There are such producers as Dracaena Wines in Paso Robles, California, whose Cabernet Franc gives new definition to the phrase “sexy beauty”, or Leah Jørgensen Cellars in Oregon who produces both red and white Cabernet Franc wines that could each be described as being devastatingly gorgeous. The redemption of Cabernet Franc is coming as producers are finally giving the forgotten father of the most well-respected variety in the world the adoration that it has deserved for way too long.

One of the most powerful scenes in the Star Wars original trilogy is when Luke Skywalker takes Darth Vader’s lifeless body to a deserted place in the woods where he gives him the funeral rites of a Jedi – burning his body. It is fitting that Luke alone looks at his father’s outer shell, Darth Vader, being turned to ashes while Luke’s thematic melody, which represents his journey, plays in the background. To me it represents many things… destroying the twisted villain Darth Vader, freeing the once good Anakin Skywalker from his prison… bringing balance to the Force… allowing Luke to find peace within himself so he may move forward… all the while wondering about the man that Anakin Skywalker should have been.

In a way, it is impossible to know the nuanced layers that Cabernet Sauvignon can offer if we do not intimately get to know its father – Cabernet Franc. Fortunately, we have what our forefathers and foremothers did not have, the opportunity to drink an exciting array of amazing Cabernet Franc wines from around the world. 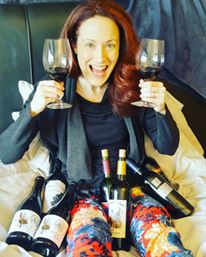 Me and my Cabernet Franc wines! Yee-haa!!

I was only given samples to taste from the US, but in the past, have been extremely impressed by some of the quality producers coming from the Loire Valley and so those are certainly worth checking out as well. Also, the Finger Lakes, New York, is also missing from my samples but they are well-known for their amazing Cabernet Francs and so it was fun to try other areas of the US that are not as known for their Cab Franc wines.

I tasted the following wines in the morning of Decemeber 4th, as I prefer tasting early in the day, and participated in the Twitter virtual tasting later that night. The wines are in the order in which I tasted them.

–2012 St. Supéry Estate Single Vineyard Cabernet Franc, Rutherford, Napa Valley, California ($65): 94% Cabernet Franc and 6% Cabernet Sauvignon. This wine was full bodied, like the Ehlers, but with more cassis and chocolate notes, yet the cooler 2012 vintage was evident with marked acidity.

–2014 Dracaena Wines Cabernet Franc, Paso Robles, California ($32):  90% Cabernet Franc and 10% Petite Sirah. A sexy, lush wine that really opened my eyes to the fact that I did not know Cabernet Franc as well as I thought. Who knew that it could make such a hedonistic wine with raspberry jam, spice, black pepper and hints of rosemary on the finish? It has textural complexity with well-knit tannins that gave shape to the luscious body. I don’t smoke, but if I did, I would have smoked a cigarette after drinking this wine.