Ageability: Does it matter to the wine world anymore?

It does seem magical how some wines can improve with age. When I first started my wine studies 15 years ago, this was one of the aspects of wine I found truly exciting. But it initially led to the incorrect notion that all wines of premium quality or above are supposed to age. In fact, only a tiny percentage of the world’s wines are built for longevity, and that number seems to be dwindling by the day. So does ageability matter anymore?

The Grand Cru Classé red wines of Bordeaux are the first to come to mind when we think of wines that are made to age gracefully. There was a time, not that long ago, when these wines were undrinkable before at least a decade in bottle. But many of these top Old World chateaux have been making wines with more fruit, rounder tannins, and softer acidity, especially as they have seen their counterparts in Napa and Barossa Valley succeed with this style of wine. Many of these chateaux owners that explain Bordeaux’s recent approachability is the result of climate change. But some have argued that Bordeaux has purposely tried to achieve higher points from certain wine critics by picking later and using techniques that are perhaps not in the best interest of long-term aging.

A brief detour down memory lane – but it’s related, I promise. 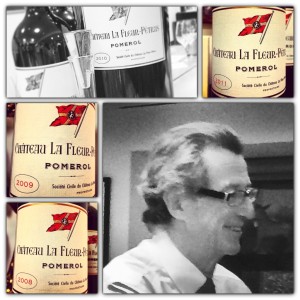 I had a fun discussion with Christian Moueix last year. I was telling him how I thought the 2010 Château La Fleur-Pétrus was better than the 2009. I was a huge fan of all the backbone of tannin and acidity, and the pure “tension” of the 2010, and I thought it was superior to the 2009. He preferred the 2009, and he said that when you get to his age, you don’t want tension anymore. Ahahahaha! I loved that comment. Also, he emphasized that he believed in a more fruit forward wine style, and that Bordeaux had a lot to learn from California. Well, he certainly has the right to his opinion, and may I also say, he was a charming man with a beautiful smile.

Okay, back to the debate…

There are even winery reps that give staff trainings for big, robust fine wines, and tell the staff that their wines can certainly be consumed now. For example, Latour has kept their notoriously powerful, backward style, and they no longer participate in the en primeur campaigns. They have said that en primeur doesn’t make sense for their wine, which can only be appreciated 10 to 15 years down the line.

Alternatively, an interesting example of a winery placing importance on youthful accessibility and ageability is Penfolds. Their Grange, which can undoubtedly age, is taken off the skins very early in the winemaking process to give it a more approachable texture while young. But the consistently deep concentration of the wine – mainly due to the idea that it is a blend from top vineyards, according to Peter Gago – helps it to positively evolve.

Yes, many wineries around the world are not concerned with the potential ageability of their wines. Most wines are meant to be consumed soon after purchase for ideal enjoyment of their youthful qualities. The fear of losing the appreciation for the art of aging is only valid to a small percentage of wines; but since those wines are rooted in history and long held tradition, it would be a shame to lose that art.

The wine business is known as a low margin business. It is not a business that one chooses purely for a high salary; if anything, many leave higher paying jobs to pursue their dream in the wine trade, knowing they will make a lot less money but perhaps having a happier existence. I have talked to many different owners of retail stores, and all have said that it is not an easy living. Actually, there are some US fine wine retailers that have started to make it a practice to not disclose the portion of a wine critic’s quote which expresses that a wine is not ready to drink until a significant amount of time. As a younger generation has a need to drink fine wines within a couple of days of purchase, retailers cannot afford to lose out on those sales.

There are even winery reps who give staff trainings for big, robust fine wines, and tells the staff that their wines can certainly be consumed now. For example, I took part in a staff training for the 2010 Opus One, and the Sales Manager highlighted the fact that she just opened it from bottle, without any decanting, and it was drinking great – which I agreed with her. When she was questioned by the staff about the ability to age, she said it could age long-term without any issues, but she was quick to return to the idea that the staff should sell this wine to drink now.

Morgan Stanley reported that at the end of 2013, the US was the second largest wine consuming country in the world. In the US, it is estimated that 70-90% of all wines are consumed within 24 hours, depending on the region. There are traditional wine drinkers who are trying to fight this trend of immediate consumption, especially for fine wines. Many traditionalist wine drinkers agree that the newer and critically acclaimed winemaking style of extreme ripeness, forward fruit, low acid, high alcohol and soft tannic structure does not bode well for aging. There are some traditional wine drinkers that have tried to fight this trend with their voices on social networking such as Twitter and Facebook. They fear that the appreciation for having patience rewarded by cellaring wines is being lost among current younger wine drinkers.

Conversely, fine wines, at one time, seemed like a product that was only for the privileged. A consumer needed the resources and the education to truly appreciate it. As the internet has opened the door for all consumers to learn about wine, even the most expensive wines in the world, it has made it a more level playing field in terms of accessibility to wine knowledge. But the idea of having the proper resources such as a wine cellar, and also the means to buy a large quantity of fine wines – so one can drink the older wines while waiting for the younger ones to reach their prime – is not an option available to most consumers.

Is there anything wrong with a consumer, who cannot afford a cellar and the purchase of many cases of fine wine to want to simply splurge on a very expensive bottle for a nice occasion and consume it right away? True, they may not enjoy the wine in its prime, but if they receive great enjoyment from consuming it now, and cellaring is not an option, should those in the fine wine world have judgment about that consumer and try to dissuade them from buying it because they cannot truly “appreciate” it?

It has certainly lost its importance to a certain degree, even in the fine wine category. But there are still wine writers, influencers, wineries, retailers and traditional wine consumers who wave the flag for teaching the novice consumer how much pleasure and reward come from aging certain wines. It will certainly be a sad day if we completely lose the fine art of patience and appreciation for what aging brings, which can not be duplicated by any high tech practices. That is why it is important for those who appreciate older wines to make their voices heard, while also appreciating other consumers who, for various reasons, may have to pull the cork on certain wines earlier than is ideal.

Celebrating Wine, Life and Inspiring Colorful People in New York City and Beyond!
View all posts by damewine →
This entry was posted in Dame Wine and tagged ageability, Christian Moueix, Grange, La Fleur-Petrus, Latour, Opus One, Penfolds. Bookmark the permalink.