The Power Of An Individual Grape Shining In A Brunello Wine

Posted on July 2, 2020 by damewine
ShareTweet 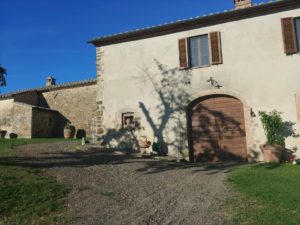 My trip to the Montalcino area of Tuscany in Italy last October to visit Brunello di Montalcino producers seems like another lifetime ago. The first inklings of the coronavirus were back in December but it seemed nothing more than a mild virus that was on the other side of the world in the city of Wuhan in China. In the world of sensational news it is no longer so easy to tell what could be a potential crisis as opposed to what is just one of the many things that flood our news cycle that has very little importance. Once the national government of China found out about a possible highly-transmittable virus that had seemingly mutated to the point where it could not only transmit from bat to human but it could easily be passed from human to human the government did everything possible to lock down the area. As we know now, the virus had been around longer and hence unknowingly people were transmitting it to each other around the world, many of us not completely understanding it, and it jumped from China to Europe and then it took its wrath out on New York City – my beloved home.

As all of us know, northern Italy, especially Lombardy, and New York City were hit hard by Covid but it could have been a lot worse if we didn’t go into lockdown – a scenario I think, culturally speaking, Italians and New Yorkers could never imagine. Every day decisions during the height of the Covid-19 here in NYC had the weight of equaling life or death while everything that framed our previous bustling lives fell by the wayside. In those quiet moments when I would try to make sure that the darkness of depression did not take its hold when inundated by the long list of people I knew who lost family and colleagues, I would think of those things that brought me glimmers of joy in the past… spending time with Brunello wine producers were one such joyous memory.

The one major positive aspect that has come out of such a tragedy is that it really forced people to examine their lives without being distracted by the constant grind many of us have to constantly abide by. Instead of seeing injustices as a general thing that can never be conquered, we were inundated during the coronavirus crisis with heart wrenching individual stories of the inequalities of our society over and over again that became the main priority of our existence; combine that with not feeling overwhelmed with our own jobs and struggling to survive in a “paused” state, we decided to place our own lives on the line to demand change. And it struck me how powerful a person’s story can be if enough people are in a situation where they can take the time to see it and allow themselves to process it. This idea of focusing on the individuality of something was what made an impression on me at a small Brunello estate called Le Chiuse. 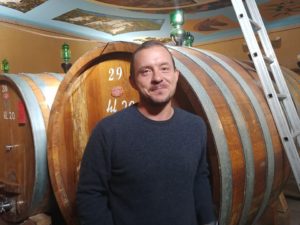 One sunny day last October I was walking among historic vineyards that were at the heel of the hill of Montalcino in Tuscany not knowing how quickly my world would change in a matter of months. My group was there to meet family owner and winemaker Lorenzo Magnelli of the Le Chiuse estate who comes from the famous Biondi-Santi lineage. In 1869, Clemente Santi was the first producer on record to have a wine called Brunello and then a few generations later, Tancredi Biondi-Santi would help to establish regulations for Brunello di Montalcino starting in 1966. Tancredi left his vineyards to his son and daughter (Lorenzo Magnelli’s grandmother) but Lorenzo said his grandma was much more interested in living in the city so her brother Franco included her vineyards in the Biondi-Santi Riserva Brunello di Montalcino. At a certain point Lorenzo’s mother, with the help of Lorenzo’s father, Nicolò Magnelli, wanted to make their own wine which took the name Le Chiuse as that property was given that name by the Biondi-Santi family long ago.

There are many incredible aspects about the Le Chiuse wines such as the vineyards having historical importance with the much cherished ‘galestro’ soil, the highly respected Biondi-Santi Sangiovese clone (BBS11) and natural ferments that produce a Brunello that focuses on the expression of place, yet it is their harvest practices that were the most intriguing to me. All of their Rosso di Montalcino, Brunello di Montalcino and Riserva Brunello di Montalcino wines come from their Le Chiuse estate although they do several different harvests, a few days apart from each other, to select bunches of grapes for their varying wines.

Since their Rosso di Montalcino wines need to be fresher and easier to drink earlier, the “bigger” grapes with “lower density of tannins” are the best compared to the smaller grapes with greater concentration and structure which are ideal for the Brunello di Montalcino. All the grapes are harvested by hand by a group of ten to twelve family members who have come to know “each vine by name”. The strict selection of grapes are made in the vineyards so that the grape bunches are taken from the vines to the tank within “20 minutes” to keep the “integrity of the grapes”. The Riserva is only made in those vintages where the wines have the structure and concentration for long aging and, starting with the 2010 Riserva, it is aged for ten years.

Although Lorenzo noted that many times it was the older vines that would always yield the grapes destined for Brunello, there were always surprises by a bunch here and bunch there from other vines. It takes a lot more time and investment of energy as it would be easy to only take from those designated vines for the top wine and to always assume that everything else was not up to the high quality but then the wines would always be missing out on their ultimate promise. We find ourselves in New York City and all over the world finally taking action in regards to the idea that not everyone is given the same rights and we are missing out in investing in people who will help bring us to the next level; yes, it will take more time, more energy to find the promise of the people and places typically ignored but besides it being worth it because it is the right thing to do, it will bring us closer to the great ideal dream that was promised to us… as we only reach our promise when we recognize the best of the best in every corner and shade of color in the world. 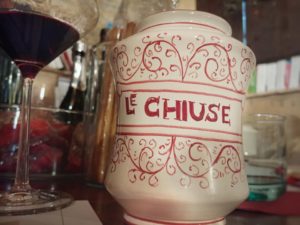 2014 Le Chiuse, Brunello di Montalcino DOCG, Tuscany, Italy: 100% Sangiovese. An enticingly fragrant wine that displays the pure elegance and breathtaking beauty of Sangiovese with an electric energy that brightened the black cherry and baking spice notes that finished with a smoky minerality and had an overall enchanting finesse, especially considering that 2014 was a challenging vintage.

2015 Le Chiuse, Brunello di Montalcino DOCG, Tuscany, Italy: 100% Sangiovese. 2015 was warmer with less rain than 2014 and so this was a bigger, more structured wine that had chewy tannins and much more brooding fruit and a freshly tilled earth component that gave it an intriguing complexity on the finish. This is a wine built for some serious long term aging yet it was surprisingly showing pretty floral notes with an underlining mineral note waffing in the background.

2010 Le Chiuse, ‘Diecianni’, Brunello di Montalcino DOCG Riserva, Tuscany, Italy: 100% Sangiovese. Lorenzo called this a “muscle vintage” and it had so much structure that it could not be released until the beginning of 2020. Extremely complex with tobacco, licorice and forest floor; decadent yet exquisite, savory yet sweet with tannins that were like thick ribbons of silk that held the wine with grace while still having lots of plush fruit with great intensity along the extraordinarily long finish.