A Community Preserving a Child’s Hope 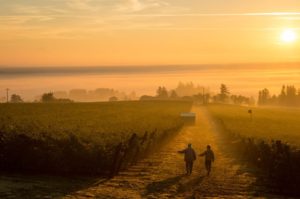 When I was 16 years old, almost 30 years ago, I remember watching the video of Rodney King, a Black American construction worker, getting brutally beaten by several Los Angeles police officers after he was pulled over in his car. It was extremely disturbing to see Rodney on the ground helpless while those who were sworn to protect the public unleashed a beating that I could never have imaged ever happening; through time I realized that this had happened all the time but this time was the first time it was recorded. So many shocking tragedies have happened between Black people and the police since that time and every time, as a society, we say we are going to do something about it, only to move on to something else. But, finally, the heart-wrenching video showing the death of George Perry Floyd Jr., a Black man who was killed by a police officer in Minneapolis on May 25th of this year, not only inspired protests from all types of people (liberals, moderates and conservatives) in every state around the U.S. but it set off a movement of social justice around the world.

Reports of the incident note that George bought cigarettes at a local store that he frequented using a 20 dollar bill and after he left, the employees of the store thought the bill could have been counterfeit and called the police. The owner of the store, Mike Abumayyaleh, said that most of the time “when patrons give us a counterfeit bill they don’t even know its fake” and so the police are notified that there is no crime being committed, they just want to know where it came from but unfortunately, this situation had a horrific ending.

After a long line of tragic events that have involved the Black community and the police with the final straw of George being murdered for the world to see, the majority of America has demanded change and is willing to do the enormous work and community commitment that it will take. After so many protests about social justice, this one feels very different because there are a lot more people from all walks of life that realize that this is one of the top issues that is holding us back as a society.

Ever since I heard it, I have been taken aback by the story of Brooks winery as it is one that really shows what a community can do when they are committed to the younger generation’s future as well as to protecting each other. As so many of us around this country are discussing how we can strengthen our own communities to make sure everyone is protected and empowered to live the life they were meant to, I can’t help but think of this winery as a shining example.

Brooks winery was started by Jimi Brooks in Willamette Valley, Oregon, in 1998 and not only did he have a strong belief in the potential of single vineyard Pinot Noir in Willamette Valley back then but he pioneered single vineyard Riesling wines as well. Tragically, Jimi died of a heart attack in the fall of 2004 leaving behind an eight year old son, Pascal, his sister Janie, his friend and assistant winemaker Chris Williams and a community of producers who couldn’t believe that this pioneer of Oregon Riesling wines was gone. The communal spirit of Willamette Valley made it possible for an outsider like Jimi to even build such a larger than life dream and that spirit continued after his death as his sister, Janie Brooks Heuck, quickly realized. Once she arrived at her brother’s house after hearing the horrible news, she was greeted by many Willamette winemakers who were figuring out how to pick Jimi’s grapes and make his wine because it was his goal to pass on his winery to his son. Moved by the community, Janie decided she would travel back and forth helping to manage the winery which became a permanent position as she is still the managing director today. Jimi’s friend and assistant, Chris Williams, has become a very well-respected winemaker and today makes over 20 different Brooks Riesling wines as well as a long line of fantastic Pinot Noir wines. And Jimi’s son Pascal has graduated from university while juggling working at the winery, traveling to learn more about wine made in other countries and is deeply grateful that so many went out of their way to preserve his ownership of his father’s dream. 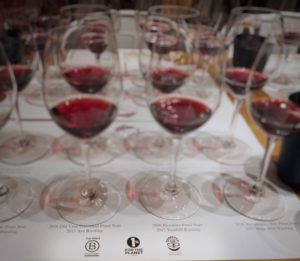 Last June I went to a seminar and tasting of Brooks’ wines with Janie Brooks Heuck leading and besides the incredible story of Jimi and his commitment to single vineyard Pinot Noir and Riesling wines being continued and becoming certified biodynamic, I was really impressed that they had become a Certified B Corporation in recent years. Certified B Corporations’ goal is to balance purpose and profit, and businesses that are given B Corp status are “legally required to consider the impact of their decisions on their workers, customers, suppliers, community and the environment.” Janie said that she is required to examine things like benefits, transparent sharing of company information, the gap between her highest and lowest paid team member, the length of stay and turnover rate for the team and ongoing education, just to name a few things. “It pushed me to implement new policies and programs” Janie noted such as “evaluating the difference between a living wage and minimum wage and many more.” And recently I found out that Brooks is a member of 1% For The Planet, companies that donate 1% of their profits to organizations fighting for social and environmental justice.

It is pretty remarkable that the hardship that could have been potentially created by the passing of Jimi was conquered by the community; not only is his son thriving because of the Willamette community getting involved but Chris and Janie were able to take their own lives to the next level as it is never too late to live your best life.

Living the Life We Envisioned

Like so many other people around the world, I was completely shaken by the George Floyd tragedy and it cut me to my very soul to watch the video. As that police officer knelt on his neck for 8 minutes and 46 seconds as he begged for his life, saying he couldn’t breath, calling for his dead mother to help him while teenagers standing by also begged for his life, I could not help but think that I let that man down by not doing enough… I think many of us felt that way.

One of the things that broke my heart was seeing an interview with George’s second grade teacher who had kept an essay he wrote when he was eight years old which she shared. She always kept one major project that the class worked on over her 24 years of teaching at Frederick Douglass Elementary School and the year she had George, who she called by his middle name Perry, the major project was during Black History Month and she asked the kids to write an essay titled “Future Famous Americans” envisioning their future. George drew a picture of himself as a Supreme Court justice and he wrote, “When I grow up, I want to be a Supreme Court judge. When people say, ‘Your Honor, he robbed the bank’ I will say, ‘Be seated.’ And if he doesn’t, I will tell the guard to take him out. Then I will beat my hammer on the desk then everyone will be quiet.”

As the journalist asked his teacher, Ms. Sexton, what her reaction was when she found out that her former student died at the hands of law enforcement, she struggled to hold her tears back and to find the words that could no better describe her feelings than “devastating”. Looking back she remembered “Perry” being a long, lanky boy even back then and that he liked singing and dancing and enjoyed his friends. “And he was a good boy. He was a delight to have in the classroom” she said as she tried to smile while fighting tears.

There is no doubt that our system is broken when a child that had so much hope and a desire to be part of justice not only doesn’t get to find a path to his dreams but is killed in such a senseless way and by the law enforcement system that he wanted to be part of. It makes me take a closer look at all those young kids and young adults in my community, especially if they are Black, and although they are precious and beautiful in my eyes that one day they may mistakenly be considered a threat to others. All of us have so much work to do and this is only the beginning as all of us have to build a better society where each kid is given a chance; this younger generation is already impressive with how much they are changing the world and I can’t wait to see where they are going to take us in the future.

That excitement also seemed evident when Janie Brooks Heuck talked about to what level of evolution her nephew Pascal will bring Brooks winery when the time is right. Janie, along with her winemaker, Chris Williams, has already laid down a pretty solid foundation for not only Pascal to fly but to be a great benefit to everyone involved with Brooks winery. It’s a great example for the rest of us in the older generations of how to create a better foundation that gives everyone an equal chance; an equal chance for that eight year old little boy who wanted to make the world a better place.

***Cover and first photo are both credited to Brooks Wine