Wines from The Dead Land

Posted on June 7, 2018 by damewine
ShareTweet 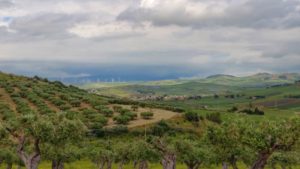 Sometimes I just stop in the middle of New York City, take a step back and take it all in… I look all around… the buildings, the cars, the people, all types of technology, all types of people, living a life that is built on the foundation of human curiosity. Relatively, we have not been on this planet that long but we have created, invented and constructed things that are beyond comprehension when considering the environment at the time of the beginning of our species. And that curiosity is far from satisfied as we go beyond this planet as well or explore the depths of the oceans… some of us don’t even get swayed by others telling us that a particular path to knowledge and experience is a dead end… some of us cannot simply take the word of others… we need to experience it for ourselves.

During my trip to Sicily back in May, I had the good fortune to end up at the Baglio Sorìa Estate. It was not so much good fortune because it is an incredible resort with a fine restaurant, or panoramic views, or Valli Trapanesi DOP olive trees on their property, or the idea that they became completely organic even before the organic certification existed in Italy, but I felt I was fortunate because I learned about the wines from the dead land.

Baglio Sorìa Estate is part of the Di Gaetano family’s estate group called Firriato and it is their first estate which started their passion for vineyards and winemaking; Baglio Sorìa being the estate closest to the Mediterranean Sea in Western Sicily. Firriato has a total of 6 estates with 4 being on the West side of the island and 1 being in the East, Cavanera Etnea on the slope of the volcano Etna, and the last estate is on the tiny island of Favignana off the Western coast of Sicily – or affectionately called The Dead Land.

Firriato’s Calamoni  estate on Favignana has many notable aspects such as ancient fossils and calcarenite limestone formed over millions of years but none more interesting than the fact that it has been considered by many agronomists, people who study the science and technology of producing and using plants, as an area not suitable to grow much of anything, furthermore, one agronomist stated that a wine producer could place all the money and resources to accomplish the ideal viticultural practices on the Favignana island and that producer would still never be guaranteed of any results. 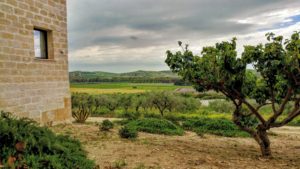 Federico Lombardo di Monte Iato, COO and family member of the Firriato estate group, was telling us about their Favignana project, started in 2007, as we tasted their white wine Favinia ‘La Muciara’ from this unique place; also they have a red wine and a sweet wine made from dried grapes. As Federico talked about the severely rocky ground, the fierce winds, the intense sun and most of all the toxic soil due to the chlorine which is caused by excess salt (sodium chloride) I could not help but jump in and ask, “Why are you planting vineyards on Favignana if growing vines is so difficult there?” and his answer was simply that they wanted to know what was possible… despite not finding proof of any plant being cultivated on the island of Faviganan, their wonderful human curiosity got the best of them. 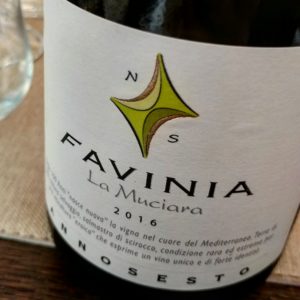 One of Firriato’s favorite grape varieties to grow on the Favignana island is the classic aromatic Sicilian white Zibibbo (Muscat of Alexandria) because Federico said that it develops aromas that they had never experienced; further research they have conducted point to Zibibbo producing significantly more terpenes (terpenes are organic compounds produced by a variety of plants that can result in an array of aromatics in a finished wine) when grown on Favignana compared to when grown anywhere on the island of Sicily; also Federico said that the wines seem to have great ageability. Despite at times seeming like  Firriato was getting way over their heads when taking on the Favignana island project, once they realized the unique beauty within this “dead land” they knew they had to keep placing their energies into it…. and they hope that other wine producers will join them on Favignana.

Curiosity may kill the cat but it helps keep the human spirit alive and open… once we allow our knowledge to be limited by what we have been told rather than what we have directly experienced, we become part of a narrow-minded world that keeps everything, and everyone, in a superficial compartment. We can never really experience the potential of the world we live in, or the people who surround us, if we are always coming to the table thinking we know what to expect considering that each of us live in our own bubble.… How many dead lands are out there, I wonder? How many people in our community do we consider to be a dead end when it comes to investing our time and money? How many benefactors are curious enough to want to invest in these people and places to see if there is something deeper that goes beyond the numbers reported and what the outside world tells us what is logical to consider? The Favignana project is a lesson that actions don’t always need to make complete sense because we do not know all the precious gems out there in the world… and without curiosity we never will.

We tasted a lineup of Firriato wines; again, they have 6 estates with 5 located in Western Sicily, including the island of Favignana, and 1 in Eastern Sicily, Cavanera Etnea, on a slope of the Etna volcano.

The estates are as follows:
–Baglio Sorìa

-2017 Le Sabbie dell’Etna, Etna Bianco DOC: White blend of Carricante and Catarratto, from the Cavanera Etnea Estate on the Northeastern slope of Mt. Etna 720 meters (2400 feet) above sea level. White flowers, peach skin, almonds and a saline finish that had marked acidity and a long length of aromatics. 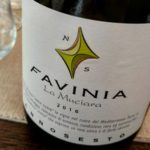 –2016 Favinia, ‘La Muciara’, Terre Siciliane IGT: White blend of majority Zibibbo with Grillo and Catarratto. From the Island of Favignana – Calamoni di Favignana Estate. Seashell, lime blossom, hint of perfume, elderberries with hint of ginger that was rich in fruit yet vibrant in acidity. 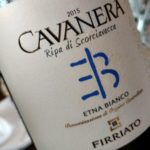 -2017 Cavanera, ‘Ripa di Scorciavacca’, Etna Bianco DOC: White blend of Carricante and Catarratto from Cru of Etna. From the Cavanera Etnea Estate on the Northeastern slope of Mt. Etna 750 to 850 meters (2500 to 2800 feet) above sea level. Honeysuckle, flinty minerality with linear, energetic body that had pretty lemon confit notes on the finish. 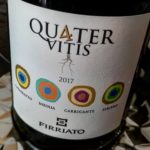 –2017 Qu4ter Vitis, Sicilia IGT: White blend of Catarratto, Inzolia, Zibibbo, and Carricante from the Etna volcano – the 4 in the middle of “quarter” is a hint to the fact that there are 4 varieties in this blend. This wine is called “Sicily in a glass”. A blend of grapes from Pianoro Cuddìa Estate in the Western Trapani countryside and from their Etna estate, Cavanera Etnea. Pressed flowers, citrus pith, green almond and stony rocks that had a broad body. 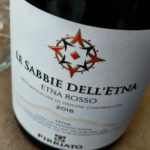 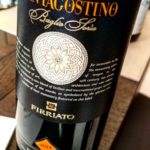 –2013 Santagostino, ‘Baglio Soria’, Sicilia IGT: Red blend of Nero d’Avola and Syrah from the Baglio Sorìa Estate. This is a fantastic, super-star wine that shows the power of when the king of Sicilian grape varieties, Nero d’Avola, is blended with the international grape variety that does the best in Sicily, Syrah. Enticing aromatics of a forest floor right after the rain, sweet tobacco left with lifted rhubarb notes and cloves on the expressive finish all wrapped together by muscular tannins. 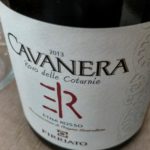 -2013 Cavanera, ‘Rovo delle Coturnie’, Etna Rosso DOC: Red blend of Nerello Mascalese and Nerello Cappuccio from Cru of Etna. From the Cavanera Etnea Estate on the Northeastern slope of Mt. Etna 750 (2500) above sea level. Wafting notes of rose oil draws you in with hints of wet stones and finely laced tannins that had a bright finish – elegant. 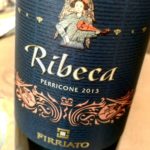 –2013 Ribeca, Perricone, Sicilia DOC: 100% Perricone from the Pianoro Cuddìa Estate. Perricone used to only be a blending component in Sicilian reds but some producers are taking it more seriously, such as this mono-varietal bottling. This wine has Mediterranean generosity with ripe black and red fruit with layers of complex savory notes of dried herbs and fresh bay leaf. It is lush yet had plenty of structure to give it shape and drive. Firriato has been researching Perricone since 1985 and they have isolated their own biotype (clone).

–2013 Harmonium, Nero d’Avola, Sicilia DOC: 100% Nero d’Avola from the Borgo Guarini Estate. This is a blend of 3 different single estates and 2 different biotypes (clones) of Nero d’Avola to create a wine with more consistency year in and year out. This wine had a lovely harmony with mulberry fruit, baking spices and cocoa powder with sculpted tannins that was balanced by a fleshy body. 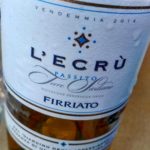 –2014 L’Ecrù, Passito Naturale, Terre Siciliane IGT: 100% Zibibbo sweet wine from Borgo Guarini Estate made by harvesting a mixture of fresh and late harvested grapes that are dried on the vine. Rich sultana with honey and fresh sage with invigorating orange peel on the finish that begs for another sip.