All We Need Is A Little Hope

Posted on September 5, 2017 by damewine
ShareTweet

Our first encounters with wine can shape how we see the wine world, even after a couple of decades of avid wine tasting and learning. We cannot help but have those old assumptions sit on our shoulder and whisper in our ear. Some wines can never get past the preconceived prejudice of being too low in quality… and some… such as Bordeaux… are assumed to be too expensive – too elite – just too damn exclusive. The top Bordeaux wines with their soaring, astronomical pricing and domination of the wine news as being some of the most costly libations in the world (while only accounting for a meager percentage of Bordeaux’s total wine production) actually have hindered the multitude of small, hardworking producers in the region – the backbone of Bordeaux wine in many ways.

Bordeaux, as well as many French wine regions, had been the leaders of the world when it came to wines to emulate. Then many of the “new world” wine regions started to find their own style and research, and France, especially Bordeaux, started to open themselves to evolving by learning from those same new world regions that first looked up to them. A great symbiotic relationship started to form between, for example, California and the top Bordeaux producers. In 2010, I heard Paul Draper, retired CEO & Winemaker of the famous Ridge winery in California, and Paul Pontallier, former Managing Director of legendary Château Margaux in Bordeaux (who sadly passed away too young last year), get into a lively discussion about how each wine region has been extremely influential to the other. Draper said he always dreamt of making wines that lived up to Bordeaux and Pontallier reciprocated by saying that he was constantly aiming to be on par with iconic California wines such as the ones Draper had produced for years.

But the hesitation for Americans to purchase less-known Bordeaux does not come from the concern that these wines will lack in quality, it is the out right fear of the cost, as well as the notion that we, as wine drinkers, may not be sophisticated or worldly enough to enjoy these wines. Well, the reality could not be further from the truth. In my early years in the East Village in New York City, I was fortunate to be given my daily lessons of the reality of people from various countries around the world. Many Europeans, on a shoestring budget like myself, would show me around hole in the wall Mom-and-Pop wine stores… they would point out the value wines from various European countries and, surprisingly, they were able to find a couple from Bordeaux. Unfortunately, many of the small Bordeaux producers had issues exporting their wines, so I never got to try many of the lovely Bordeaux wines that were very affordable that my friends often talked about as they reminisced about their previous life in Europe.

Now, fast forward 20 years later – I am sitting in a Manhattan restaurant with Stéphane Defraine, owner and winemaker of Château de Fontenille in Bordeaux. Stéphane owned his own winery, Château de Fontenille since 1989, and he previously had worked for other Châteaux in Bordeaux for many years. He had a huge smile – beaming with excitement – during our entire lunch as we tasted his wines and discussed his winery. I was so taken aback by his enthusiasm, especially since he had been in the business for so long. Then when I mentioned that I was so happy to see Bordelaise wines with so much spirit and beauty at such an accessible price, around $15, coming into the US, he said that yes, he was just as thrilled if not more… many like himself who decided to have their own winery could never even be considered for the US export market. There were Bordeaux négociants, aka merchants, who would only consider the top Châteaux for export, and at one time, if the merchants didn’t want to deal with a producer then that producer had no chance.

But he said that nowadays a producer can find an importer directly, and with social media get their name out there. Eventually, it came out that this was his first trip to New York City; he didn’t want it to be known, but I thought it just made everything about him that much more refreshing. I could see a spark in his eye because he had hope that there was a chance… for him… for all the little guys… and at the end of the day, isn’t that what we all just ask for… a little hope? 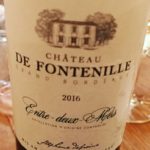 –2016 Château de Fontenille, Entre-Deux-Mers, White Bordeaux: This impressive $13 White Bordeaux really made my day! A blend of 40% Sauvignon Blanc, 20% Sauvignon Gris, 20% Muscadelle, and 20% Semillon really stands out from many of the other Sauvignon Blanc wines… juicy white peach, good body on the mid-palate with hints of spicy, floral and chalky notes.

–2016 Château de Fontenille, Bordeaux Rosé: A textural, mineral driven rosé from Bordeaux made from a blend of 70% Cabernet Franc, 20% Merlot and 10% Cabernet Sauvignon with a fun, tactile impression on the palate and hints of raspberry fruit and lemon blossom…. and for only $14.

–2014 Château de Fontenille, Cadillac Côtes de Bordeaux, Red Bordeaux: Some of you Bordeaux wine lovers may know Cadillac as a tiny sweet wine producing area close to Sauternes, that makes wines that are relatively lighter and not as expensive as its more famous neighbor. But Cadillac Côtes de Bordeaux encompasses a larger area, still relatively small compared to the entirety of Bordeaux as a region, and produces supple reds with pretty fruit for everyday drinking. This Château de Fontenille is a nice example of a $14 medium-bodied, approachable red Bordeaux with red cherries and only a subtle hint of toast that had plenty of body and texture to hold up to the fried chicken spicy sandwich I had during lunch.

Celebrating Wine, Life and Inspiring Colorful People in New York City and Beyond!
View all posts by damewine →
This entry was posted in Dame Wine and tagged Bordeaux, Château de Fontenille, France, Hope. Bookmark the permalink.