Bordeaux Wines: Everyone is Invited to the Party

Posted on October 19, 2015 by damewine
ShareTweet

I have been to Bordeaux a few times but the one time that stands out in my mind was during the Bordeaux Fête le Vin in 2010, which was taking place at the same time as the Masters of Wine Symposium that had chosen Bordeaux as their host city. It was a great time to show off a “nicer”, more tourist friendly, city as Bordeaux was known for being an unsavory town at one time. But now they have a new tram, an upgraded boardwalk by the river, and brighter lighting at night. The Fête le Vin, which takes place every two years really shows the spirit of the Bordelais – they are serious about making wine but playful when drinking it. It was an incredible experience walking around tasting many of their vinous offerings while listening to music, seeing people wearing fun hats with laughter filling the streets. 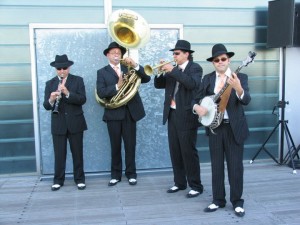 Currently, Bordeaux is trying to improve their image.

Their image problem reminds me of a past teaching from a renegade American Buddhist monk. I did not agree with many of this particular monk’s unorthodox practices, but there are a couple of lessons I have carried with me. The one that relates to Bordeaux is the “Pen Lesson”. We may look at a pen and see it as a writing instrument, but a dog may see it as a chew toy: two completely different perceptions for the same item.

We deal with problems of perception every day. How many times has someone made a wrong assumption about you? Typically they made this wrong assumption based on how you look or only knowing a couple pieces of superficial facts about you. This happens all the time. The whole story of someone is complex and most people don’t have the time or opportunity to get to know the different sides of another human being. I think most of us feel that we cannot be defined by one label and I would argue that Bordeaux cannot be so easily defined as well.

First, many Americans think that all Bordeaux wines are expensive – the majority of it is not. There are plenty of good bottles under $20 bucks and there are great bottles under $50. The quality of Bordeaux across the boards has significantly improved over the past couple of decades.

Second, some Americans think that you have to wait a few years to drink red Bordeaux.
Many of these wines are meant to be drunk upon release – the reds that fall into the “under $20” category are made from Merlot. I know, I said the dreaded M word, but although Merlot has gotten a bad reputation, it’s a common blending partner with Cabernet Sauvignon and in some cases Cabernet Franc, or both, which gives structure that helps to bring balance to many Merlot based wines.

Third, Bordelais are stuffy. In fact, most I’ve met are not stuffy people; if anything, they know how to party! I think about every time I’ve been to Bordeaux – I was always in the corner falling asleep while the Bordelais were dancing and drinking the night away.

My feelings for Bordeaux are rooted in drinking their cheap wines when I was young, naïve and poor – living in the East Village in New York City. At the time, there were lots of Europeans living in the area that were struggling artists. We bonded over many cheap European wines and so I associated Bordeaux with feelings of camaraderie and community. I had no idea that it was supposed to be an elitist drink at the time.

Through the years I have had the pleasure of tasting some of the most sought after Bordeaux wines. I am not bragging, well maybe a little, but I have had the privilege to have seen and tasted the full picture of Bordeaux.

Bordeaux has certainly been on the chopping block over the past few years. The escalating prices of their top tier wines have alienated their traditional markets and some have accused them of taking advantage of newer markets. I’m not going to get into this topic, as, in a sense, it is almost a non issue in the discussion I’m trying to start about their more affordable wines. The majority of people working in the wine trade in Bordeaux are hard working people that are barely making a profit. Yes, the wealthy families of the top Chateaux always make the headlines but we should not become so engrossed in those stories that we ignore the majority, many of whom are directly involved, giving their sweat, blood and tears to make good wine.

The Bigger Picture of Bordeaux

My past experiences selling Bordeaux to Americans have many times been linked to elitism. Sometimes this helped to sell these wines but I think in general, this concept is not one, which is thankfully, being taken up by the newer generation of wine drinkers in the US. We are becoming a more sophisticated wine drinking culture and I believe that real wine sophisticated countries know where the deals lie in wine – having more in-depth knowledge of a region from entry level up to the highest tier.

For such an old world region, they have certainly encouraged women to take a leadership role over the past decade….
-Caroline Lévêque was the youngest woman to become a sworn broker in Bordeaux, at the age of 23, in 2012
-Bérénice Lurton was a recent past President of Crus Classés of Sauternes and Barsac
-Sylvie Cazes was a recent past President of Union of Grands Crus Bordeaux

Bordeaux has a long history of winemaking families that go back for generations, such as the torches that were passed from father and son to manage Haut Brion and Petrus estates. This sense of family and lineage are part of what makes Bordeaux special but their inclusion of foreigners to become owners and winemakers have also made them a more open and international region. Belgian, German, American, Welsh and New Zealand winemakers represent the new faces of Bordeaux producers.

Welsh born and raised, Nicola Allison, who is co-winemaker of Château du Seuil with her New Zealand husband Sean Allison, is able to explain her experience as a foreigner in Bordeaux. 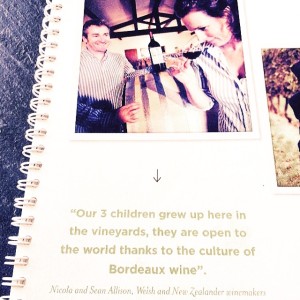 “Our family soaks up all the different nationalities every day, and consequently the children aren’t afraid of traveling, thanks to the culture of wine and reaching out to others.” – Nicola Allison

Bordeaux is More Accessible to a Wider Audience

I was very excited after a meeting with Allan Sichel, Vice-Chairmen of the Bordeaux Wine Council (CIVB: Conseil Interprofessionnel du Vin de Bordeaux), and Cecile Ha, International PR Director of the CIVB on October 7th. They told me about the current construction of The Cité des Civilizations du Vin, a building that will house a multi-functional center on the banks of the Garonne. It will be a futuristic structure that will represent an artistic expression of what one sees when they swirl their glass. This cultural center will be a hub for tourists to learn about Bordeaux’s history, vineyards, winemaking and classes that show the entire picture of Bordeaux wines from entry level to fine wine. A huge investment to create an enormous beacon that will be a warm light to attract even the most intimidated wine drinker.

Conversely, there are concerns with this structure being a giant distraction that deters visitors from actually seeing the real process of growing grapes and making wine.

My personal opinion is that many people only visit Bordeaux city – and may add a stop to visit the breathtaking UNESCO Saint-Émilion as well. And lets be honest, most wine drinkers do not want to spend tons of time learning about the ins and outs of the vineyards and winemaking of Bordeaux (that’s what we wine nerds do!) and there is nothing wrong with accepting that idea and trying to cater to it.

Also, Bordeaux needs help, since only a small segment of the population is wealthy families. Most producers have been struggling for years and do not have the time or manpower to conduct personal tours of their wineries and vineyards. In an article that was published in the June 2010 Decanter magazine, Bernard Fargues, president of Syndicate of Bordeaux (which represents over half of the regions’ 8,000 winemakers) said that around 90% of his members were having some level of financial difficulty, with at least 50% suffering serious financial problems.

Bottom line, this region needs this multi-functional center to help broaden their consumer base if they want to survive. The CIVB, as well as other local businesses, have funded this building, knowing that many of the local winemakers need help in reaching out to an international audience.

The Bordelais understand that not everyone will be able to afford a visit to Bordeaux, even if they take the more budgeted route. But they are hoping that this commitment of time and money will show the world that they are fun, they are friendly and that their name will be associated with not only the previously mentioned terms but most importantly, they are associated with value.

This will help send the message that Americans should not be afraid to ask for a $15 bottle of Bordeaux wine in their local retail store. Instead of fearing your local sales person saying “Oh dream again, you won’t get anything for that price”, one can rest assured with the come back, “Obviously you do not know Bordeaux wine.”

Celebrating Wine, Life and Inspiring Colorful People in New York City and Beyond!
View all posts by damewine →
This entry was posted in Dame Wine and tagged Bordeaux, CIVB. Bookmark the permalink.