Keeping Core Values While Staying Open to the World

Posted on August 3, 2017 by damewine
ShareTweet 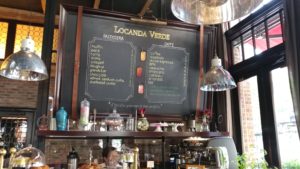 There I was, having lunch in Tribeca, New York, with a woman talking about the cultural diversity of the place she comes from… Roman, Arabian, Spanish, Greek, and so on.  We connected over our mutual love of traveling, connecting with people around the world… she recounted a trip to Cuba with her family – she said it was wonderful for her to see her young son run around Havana and at one point exclaim, “Mama I love Cuba”. For a moment, I thought that perhaps I was talking to someone else from a big, metropolitan city the size of New York City… but no, it was someone from an Italian Mediterranean island, Sardinia. An island that has the largest population of people over 100 years old, where people know that food and wine should be savored slowly, teaches its young to take care of its old, and has charmingly interwoven the cultural influences from various invaders, over several centuries, that came from far and wide. 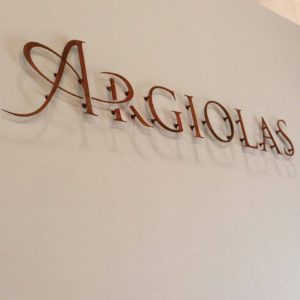 I actually knew about Argiolas before I knew much about Sardinia itself – it was introduced to me around ten years ago by another wine nerd. Their wines have all the polished markings of modernized winemaking, yet the aromas, flavors and textures of their wines were like no other I had experienced. When I worked in wine retail, it became the producer that I would recommend for those who wanted something different yet well-made, and every time I would get rave reviews for recommending such an unknown gem.

Sardinia is an Italian island in the Mediterranean, the second largest after Sicily, and like another Italian region, Campania, it has a large wealth of indigenous grape varieties on which they place their focus. They have not caved into the pressure to plant significant amounts of international varieties. Actually, in 2012, during the Fourth National Congress on Viticulture, held in Asti, Italy, it was noted that there were 250 different grape varieties living on Sardinia, although only 24 were listed in the National Registry. One grape, called Cannonau, or known in Spain as Garnacha, or in France as Grenache, was mentioned by Bernardino Conti in 1549 as existing on Sardinia as Canonat, and so, some Italian experts say that the grape originated on Sardinian soil and not on the soil of Spain as many others believe. Of course this is completely disputed by Spanish experts with solid evidence backing up their claims as well. And so, the origin may never be known but Cannonau has certainly been present on Sardinia long enough, showing its own characteristics, that it is uniquely Sardinian.

What is also widely known about Sardinia is that it has one of the largest populations of centenarians, people who live to or past the age of 100, as noted above. There have been many studies as to why people live so long, but I was excited to ask Valentina Argiolas why she thought her famous grandfather, Antonio Argiolas, the father of Sardinian modern winemaking, lived to the ripe age of 102. 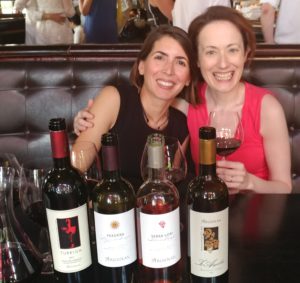 When I first met Valentina for lunch in downtown Manhattan, I was immediately taken with her golden Mediterranean glow. I was able to learn so much about her family’s wines, wines that I had admired for so long, as well as getting a taste of what it might be like to be a Sardinian – especially the granddaughter of Antonio Argiolas. She was bright, worldly and grounded in her beliefs while also surrendering to the moment to take in a wonderful experience. She talked about the long life of her grandfather, how he lived a good life filled with exercise and conviviality until his last breath. She noted that he had a daily glass of Sardinian red wine and a whole fish for dinner… but I have known many people who kept an excellent diet, combined with moderate wine consumption and did not live such a high quality life for so long. To me, there had to be more… 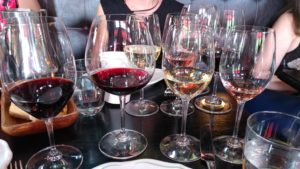 Then she talked about her love for travel… how she and her husband travel everywhere with their small children, saying that it was not a big deal as her kids actually love it. And when I heard her story of visiting Cuba and her connection with the people, her remembering with a smile her children running on the streets of Havana, that although she is a sharp woman who knew how to help take care of her family’s business, she was also a woman who knew how to place business and stress to the side to live those precious moments that fill us with the magical dreams that all of us need to get through those less-than-magical times.

Enrich Yourself with Biodiversity while Keeping Core Values

I find it interesting how people see biodiversity… especially that which we find to be difficult to integrate. I spent all of my young adult life in a poor, artsy New York City neighborhood filled with people of various cultures, religions, and races that were happy to give their last dollar to someone else who needed it… and so, that is the most natural biodiversity to me. But I must admit, that since, most of the time, I was around artists who were proud of being unknown and poor, I didn’t really have any idea about the competitive ruthlessness of the world until I was in my 30s. I was an open vessel giving all without any consideration that I could have been used or taken advantage of. Through time, I have learned to be more careful, even though it is still hard to fight the impulse to want to open my heart to everyone in my path. I realized that I can’t live in my little bubble if I wanted to grow professionally and personally. But I never wanted to lose those core values of generosity, openness, and simply, pure surrender to moments that are rejuvenating to believing in humanity again. And so, I deeply admire how Valentina is able to live in the moment, appreciating the connections with people around the world without any noticeable fear or doubt while being very aware of the many realities of the world.

Maybe that is Sardinians’ secret to a long and, most importantly, good life. That no matter how many times they had been invaded, or they themselves travel beyond their captivating island, they know how to integrate the things that enrich the heart and spirit and avoid those things that tarnish their soul.

It is worth noting that Argiolas has carried out an ambitious project for the selection and conservation of native Sardinian grape varieties. They work with 11 local varieties (Vermentino, Cannonau, Monica, Bovale Sardo, Malvasia, Carignano, Nuragus, Nebbiolo, Moscato, Caricagiola and Nasco) and have researched 5000 different clones (or biotypes) for each variety to find the healthiest and highest quality vines. Their collection vineyard has around 5000 plants total, from 499 selected mother vines to help propagate the best replanting. 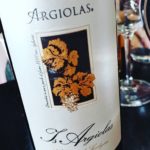 –2016 Argiolas, Is Argiolas, Vermentino di Sardegna DOC: 100% Vermentino from the oldest vineyards of Argiolas. Vermentino is another variety that has enjoyed a long history in Sardinia, but like Cannonau, the origin of Vermentino is still a mystery. This variety does best on poorly fertile soils and it has a good tolerance for the salty Mediterranean winds. This Sardinian Vermentino really shows a sensational saline minerality that no other Vermentino winemaking area can replicate, with lemon zest and marked acidity while maintaining good flesh on the body. Its salty, stony finishing note is really out of this world. 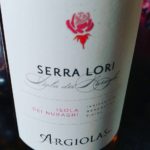 –2016 Argiolas, Serra Lori, Isola dei Nuraghi IGT: Dry rosato (rosé) blended from Cannonau, Monica, Carignano, and Bovale Sardo, four red grape varietals that typify Sardinian viticulture. What a fun, juicy, vibrant rosato, aka rosé, wine. I still got that hint of salinity, with wild strawberries and white pepper. Have you ever had strawberries with pepper on them? It may sound odd but when you have it you will ask, “where has this combination been all my life?!?” Also, the back label said to pair with pasta with sea urchin roe…. oh my God… yes, yes! And the idea that it is only $14 makes it my new summer wine of choice. 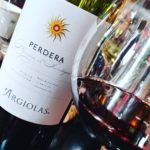 –2013 Argiolas, Perdera, Monica di Sardegna DOC: Perdera is 90% Monica, 5% Carignano, and 5% Bovale Sardo. There are many vines on Sardinia that are supposedly incorrectly labeled as Monica, but Perdera from Argiolas is one of the wines that a wine lover can drink to know what real Monica tastes like… this 2013 was light and nimble with floral and sweet spices on the nose that evolved into an extra sweet tobacco note as I went back to my glass at the end of lunch. A perfect light red for those who want a bit more complexity than your average everyday wine… and at $13, it could very well be an everyday drinking wine. 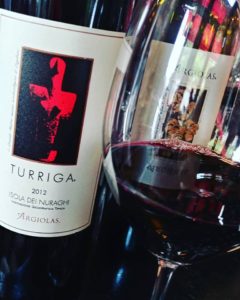 –2012 Argiolas, Turriga, Isola dei Nuraghi IGT: 85% Cannonau, 5% Carignano, 5% Bovale Sardo and 5% Malvasia Nera. Turriga is what placed Agriolas on the map of many fine wine drinkers. It is their benchmark wine for excellence and how that excellence can be achieved by only using indigenous, local varieties. This gorgeous wine had luxurious dark fruit that invites you in with exciting tension and precision that had never ending layers of intricacy… mocha, crushed rocks, balsam herb and espresso… it was loving and nurturing but there was always a feeling that you will never completely figure out this intricate wine. It is like the statue of the “Mediterranean Mother”, “Venus”, or “Turriga” that graces this label (an archaeological piece found by Valentina’s grandfather in 1935, possibly dating back to 400BC)  – open to nurturing the world yet she does not compromise her core characteristics or lose her individuality. This wine is a great example that a life filled with excellence does not have to come at the expense of what is native within us; in other words – they trusted that their top selection of native varieties could make a wine that rivaled the great wines of the world without the addition of international grapes. It was an honor to taste it.