The Greatest Accomplishment is to be Yourself Against All Odds 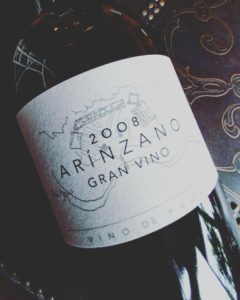 To be yourself is not such an easy task… especially considering it takes a while to get to know who the heck we are… and even that can be a lifetime process. Sometimes we rebel against what was presented in front of us in our childhood, or the opposite, we try to live up to an impossible, near perfect adult image. But I think many times, we are not just one thing… we do not so easily fit into a neat little box. That was certainly my issue. I desperately tried to fit in when I was younger but it was always a major fail… and still, even today, in New York City, with close to 9 million people, there are still people who want to have convenient, albeit limiting, labels… perhaps they can’t help it since they themselves are trapped in their own world of extreme dogmatic rules. Don’t get me wrong, I am not criticizing it. All of us need context… we need to know how we can relate… and that is why I love it when things appear in the wine world that give producers more freedom of defining themselves while helping wine lovers to find an accessible way to connect.

Many European countries started establishing regulations of controlled appellations (designations) that were based on France’s Appellation d’Origine Contrôlée (AOC) – originally established to combat wine fraud which was prevalent in the late 19th century after the phylloxera epidemic destroyed many of the vineyards. Spain has their hierarchy of designations with Rioja and Priorat receiving the top wine regional classification – DOC. No one would ever doubt that both of these areas deserve adulation for the range of spectacular wines that they produce… but some may argue that there are other areas that could be just as deserving, if they only had the investment, the opportunity. And moreover, these designations can be constrictive to the artistry of wine – such as restricting which grape varieties one can use.

I remember the very first moment that I started to get into wine debates, the most dominant topic was the scourge of wine homogeneity plaguing the world. And as time has gone on, there has been a great outcry to use local grapes and many of these regulations ensure that only local varieties are used – of course there are a few exceptions. I am a strong believer in helping to promote what is indigenous to an area but I also get excited by great wine – no matter if the varieties have been there for thousands of years or not. 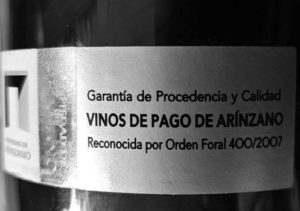 And this is where the recent, as of 2003, Spanish wine classification of Vino de Pago (DO Pago) gives a bit more freedom to single vineyards that excel in quality. The DO Pago status indicates a single vineyard that is considered to be one of the great estates in Spain and it can exist outside of an established wine region classification. Such things as the unique terroir (sense of place) and a tasting of a 10 year vertical of wines are considered to attain a DO Pago classification. Currently, there are only 14 such estates in Spain. 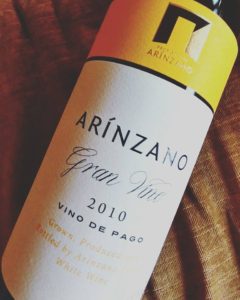 Arínzano is one of the few single vineyard wine estates that have received the status of Vino de Pago. They are located in north east Spain between Rioja and Bordeaux. I was able to taste two of their top wines, tasting notes given below, as I participated in their #winestudio virtual tasting on May 23rd. Their top red was a Tempranillo but their top white was a Chardonnay – some may scoff at such a notion considering it is Spain, and remorsefully in my younger days I may have done the same, yet it would be a shame. It was a dazzlingly Chardonnay that was elegantly shaped by being planted in an area that benefited from the Cierzo wind and a bed of chalk in the soil. The vibrancy and overall finesse was surprising to many of us. And yes, as one can guess, the Tempranillo was a superstar… still the Chardonnay could go toe to toe with it – and it beautifully differed from other Chardonnay wines from around the world.

Truly Being Open to All Possibilities

I’m happy that people have opened their minds to many different possibilities – women can work, same sex marriage is becoming celebrated and investment is given to discovering the potential of local grape varieties. But I think we miss the point when we think a woman can only be an accomplished person if she has an important career or impressive initials after her name – when we look as those women who choose to stay home with their kids as a failure. That is when we go back to the same closed minded attitude that created unfair prejudices that took away opportunities in the first place… whatever life we feel the most comfortable living, that is the path of success for us.

And with this thought in mind, I will continue to drink Chardonnay, Cabernet Sauvignon and Merlot from around the world, being open to those varieties that have been there for 10 years, as well as 1000… and I will reserve my judgments, if it was a good choice for that place, until after I taste the wine. During our virtual tasting, Arínzano winemaker Manuel Louzada wrote on Twitter that he takes inspiration from the words of Michelangelo, “the angel is already inside the marble, I’ve only (have to) release it”… he is not there to force any ideology, he is there to discover the full potential of that land… and that’s what we just need to do sometimes to find success… just surrender to who we are, no matter if it fits with popular opinion or not.

Please feel free to check out the other wines from Arínzano, besides those listed below, as they have others ranging in the mid-priced level. 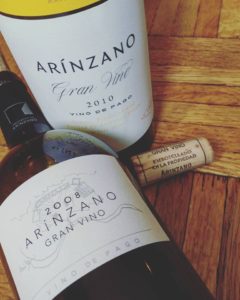 –2008 Gran Vino Arínzano de Tinto, DO Pago de Arínzano, Spain: Strict double selection of 100% Tempranillo. Generous blackberry liqueur flavors with spice, fresh leather and smoky coal embers… lots of flesh on the body, yet a regal backbone of fine tannins and marked acidity… it prances around my head like a beautiful nymph.