Powerful Things Can Happen When Women Come Together 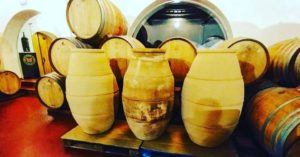 The most powerful memories I have are typically triggered by smell, and I think these important moments in our childhood are often times reflected by the images that are conjured when we smell and taste wine. Some of Marta Casas’ fondest early experiences have to do with actually smelling wine being made in the tiny cellar of her grandparents’ home. She grew up in a tiny fishing village in the Province of Barcelona, Spain, and becoming a winemaker was never considered an option since her grandfather only made wine as a hobby – to be mainly consumed by the family with a little sold off for bulk wine. But time with grandparents can often form the recollections we cherish, as grandparents don’t have to discipline or have the stresses of providing for the family… they are able to spend real quality time helping to shape the character of their grandchildren. These early “winemaking” smells would ultimately lead Marta down a path that she did not initially intend. 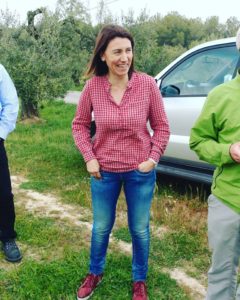 In order to have a winery in a traditional winemaking country, such as Spain, typically either someone would need to inherit a family winery, be related to people in the wine industry, or have a large fortune that he/she does not mind turning into a small fortune. Marta had none of these, so she originally started studying pharmacy at university. During her studies, she met her future husband at a party, Josep Cusiné, whose family owned the Parés Baltà winery in the exciting wine region of Penedès, first made famous by Torres. When she started visiting Josep’s family winery, the aromas in the air reminded her of the precious time she spent with her own grandfather. She started taking winemaking classes at the university she was attending, not knowing where it would lead. 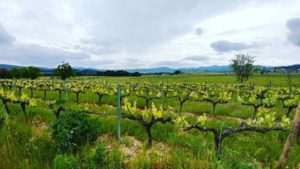 As Marta stood in one of the Parés Baltà vineyards of Syrah planted by Josep’s grandfather, at 1312 feet (400 meters) elevation (one of their over 60 sites that all needed to be individually managed and harvested) she shyly told us of her journey after some prying on our part, and uncomfortably mentioning that the wine from this plot, Marta De Baltà was now named after her. Since this vineyard was out in the open, she said it caused a great deal of gossip among their neighbors when they started using biodynamic practices. Of course, the other grape growers thought they were crazy. And now, after seeing the great success of the thrilling wines they started producing, their neighbors are starting more sustainable, organic practices and may even integrate biodynamic treatments. But it was important for Marta to credit her husband’s grandfather for believing in organic practices from the very beginning. Even though he lived through the depression during The Spanish Civil War and World War II, he always had a strong belief in restoring and maintaining harmony in his vineyards. 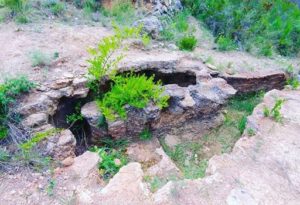 As we drove through many of their other plots (some as high up as 2460 feet (750 meters)), it was amazing to see some sites that were truly “isolated” biodynamic vineyards, surrounded by forests, that they have been allowed to remain untouched. We finally reached our tasting destination, located in the middle of one of Parés Baltà’s forests, where clay was excavated to make amphora (aka anfora) vessels thousands of years ago – baking the amphora vessels in the hole that was created when they dug up the clay. Today, Parés Baltà  themselves use this clay from their forests to make their own various amphora vessels in different shapes for their natural wines (wild yeasts and low to zero sulfites added) – now that is terroir taken to another level! 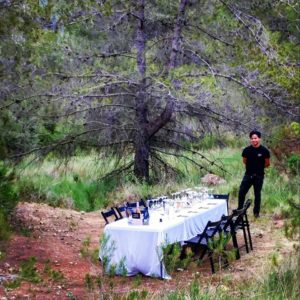 It was perfect to sit there, even as a few drops of rain fell on our heads, as we tasted their wines, some of them deeply rooted in the atmosphere that surrounded us. A few of my colleagues had never previously tasted a natural wine that they liked, and I could not blame them, as many faulted wines are passed off as acceptable in the natural wine world – but Parés Baltà Amphora white was a delicious surprise with layers of complexity, exciting flavors and not a hint of any fault – a pristine, knockout wine.

The Power of Women 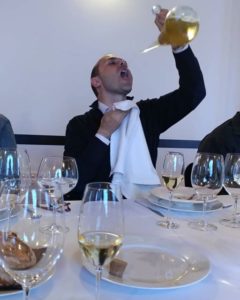 We finished this incredible day with dinner at their winery and a fun lesson of how to drink from a porron (Catalan: porró) which was artfully displayed by Marta’s brother-in-law Joan. During the dinner, Joan gave credit to his wife, Maria Elena Jimenez, who is the enologist, and Marta as the winemaker, for elevating their wines to world class status.

I was lucky enough to sit next to Marta… perhaps it wasn’t luck as I am always drawn to women whose energy recharges those that surround them… and so I was able to learn that her sister-in-law, Maria Elena, was originally on track to become a chemical engineer before she met her husband to be. These women did not know each other until they started dating Joan and Josep, but they quickly became complementary to each other. Maria Elena was the first to start working at Parés Baltà, with Marta starting a couple years after her. Maria Elena is happy to entrench herself in the science while staying out of the limelight while Marta places her energies on the artistry and she is more comfortable publicly speaking about their wines.

Marta’s brother-in-law, Joan, talked about the complications of a family winery. Although they loved and greatly respected their grandfather, and certainly to this day give him credit for continuously working in organic ways, the grandfather’s desire for high yields clashed with their desire to lift the quality of their wines. Joan said it was the two women coming together that were able to eventually convince their grandfather, a man who came from the depression mentality that you need to produce high yields, that this way the right future path for his family winery.

Conquering through love, support and unity as opposed to destruction

It just goes to show that when women get out of their own way, embrace each others’ different strengths and weaknesses, we can make the world a better place while raising all of those up around us. 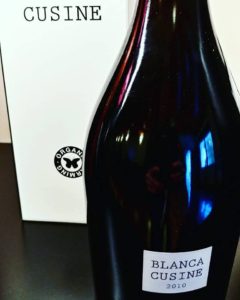 –2010 Blanca Cusiné, Sparkling, Cava DO: 60% Xarel·lo, 20% Pinot Noir and 20% Chardonnay. Golden color with a nose of roasted almond and ripe apple and cinnamon spice on the finish. Fine bubbles that form a creamy texture in the mouth. Only 3,500 bottles made. 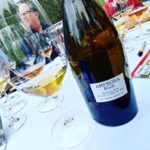 -2016 Amphora, White Still Wine, Penedès DO: 100% Xarel·lo. This natural wine seemed to blow everyone’s mind. It had all the benefits of a natural wine – exciting aromas and flavors that are not typical in most wines, yet it had none of the potential issues, faults that cause ‘dirty’ flavors. Popcorn with candied ginger and lemon curd that had a rich texture and finished with a riveting acidity. My new favorite ‘natural’ wine. Only 2,600 bottles made.

Wild yeasts ferment in clay amphorae with no sulfites added. 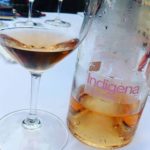 –2016 Indigena Rosé, Still Wine, Penedès DO: One can actually find this wine for $20 in New York City. 100% Garnacha (aka Grenache). A beautiful light pink color with highlights of salmon, an intense, stony minerality that is fleshed out with pink grapefruit, wild strawberry and hibiscus. It is agile and lively on the palate while still giving plenty of weight. I’m a real fan of the energy combined with generosity of the Parés Baltà wines – it seems to be one of the trademark qualities that I found across their lineup. This will definitely become my new favorite summer wine above $15.

100% Garnacha sourced from one of Parés Baltà’s plots located at 2021 feet (616 meters) inside the Foix Natural Park, one of the highest parts of the Penedès region.

–2014 Mas Irene, Red Still Wine, Penedès DO: 74% Merlot and 26% Cabernet Franc. A wine that is meant to be dark and brooding and certainly lives up to the intention… mulberry jam with star anise and fresh black cherries – plush on the body yet it still has that energetic lift on the finish that seems key to the Parés Baltà wines. Only 5,000 bottles made.

The Cusiné Family decided to start another project in the rugged landscape of Priorat with young winemaker Jordi Fernandez, under the label “Gravatavinum”. 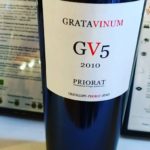 –2010 Gratavinum, GV5, Red Still Wine, Priorat DOQ: 70% Cariñena, 20% Garnacha and 10% Cabernet Sauvignon. A multi-layered wine sourced from old vines. A bouquet of slate, dusty earth and licorice gives this wine a depth of complexity beyond its years, balanced by bright notes of blood orange, black berry and scrub vegetation. It is rich and well-structured on the finish.