One of the Truths that Renews our Humanity with Bordeaux

Posted on April 10, 2017 by damewine
ShareTweet 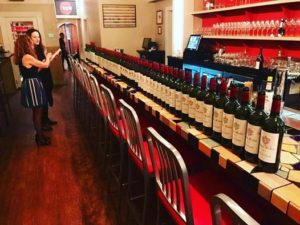 My fondest memories involving Bordeaux wines are not so much connected to my visits at their insanely beautiful châteaux, or that I was drinking a particular vintage that was part of fine wine history… it is the conversations from the heart with some of the prominent people in Bordeaux that I remember as being the most precious. These revealing discussions show that many of the key influencers in the fine wine Bordeaux region have become more and more aware of their actions having consequences. Bordeaux wants a greater legacy that goes beyond their legendary 1855 classification or even greater than being the fine wine capital of the world…and my recent experience, reassuring me of the progressive consciousness of Bordeaux, happened in the capital of the US – a Montrose wine vertical in DC earlier this year. 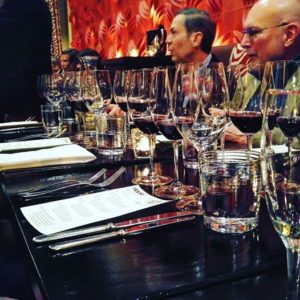 Every January, Panos Kakaviatos, wine educator, wine writer and founder of Wine-Chronicles, holds a Bordeaux vertical of one of the great châteaux on the Left Bank with Bordeaux collectors, experts and journalists/writers in attendance. It always takes the form of a wine dinner with courses paired with a flight of wines, with breaks in between the courses for an opportunity to discuss the vintages, and perceptions before and after tasting of the wines at this stage of their lives. 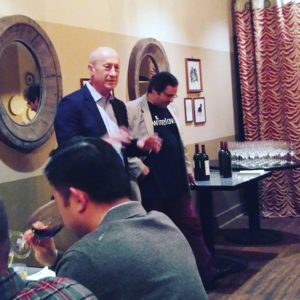 Deliberation of each flight was led by Panos and Hervé Berland, Managing Director of super second Château Montrose, as well as being a long established important figure in Bordeaux. There were various aspects discussed of the Montrose of the present, as well as the past, that were explained and examined… but one question started a little bit of a heated debate: Why are they becoming organic?

Over the past decade, Château Montrose has been making significant changes – a complete renovation of the cellar room and all existing buildings, reduced sulfur levels in their wines, drones that take infrared photos of the vines, and the conversion to organic in their 90 hectare (222 acres) vineyards. Some people present at the dinner were skeptical of whether organic was necessary or would benefit the wine consumer. 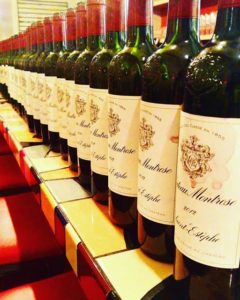 Hervé said that it was essential to first taste the wine made from the 15 hectares that have been farmed organic since 2015 before deciding on committing to organic farming for the rest of the vineyards. The wine had to be just as good as before, and in his experience he thinks that it has gotten better through time. But he mainly emphasized that there is a growing “international concern” in France of the “use of chemicals in the vineyards” and he confidently stated that organic “is the future”.

Early last year, in the center of Bordeaux, there was a protest march against the use of pesticides after a controversial documentary aired on French national TV regarding the high use of pesticides – the figures were leaked from a database listing agricultural pesticides purchased between 2008-2013; it was revealed that the Bordeaux region was at the top of the list. Although there has been no direct link to the higher national rates of cancer in Bordeaux and this report, it does make one think, especially since some high profile Bordeaux legends have passed recently from a private fight with some form of cancer.

When we are children, we are shown though advertising, and perhaps by the examples of those adults in our lives, that a successful life involves a particular type of car, size of house or fine clothes; hopefully we realize that although there is nothing wrong with buying desired luxury treats with our hard earned money, we know those things are not what makes us who we are or show our worth as a human being.

I have loved every visit to Bordeaux and it is a region and city that has become more aware of making things nice for all their inhabitants no matter their level of status; from greatly improving the once unsavory city of Bordeaux, as well as the top Grand Cru Classés, such as Montrose, taking a more serious look at how their vineyards are affecting their employees and community.

Despite Montrose’s gravelly vineyards being categorized as a “terrace 4”, on the same level as Château Latour’s vineyards, they are evolving to the next stage of achieving success and prestige – by living a life of service with compassion for the world around them. This is the final truth of how to renew humanity… and at the end of the day that is the one hope we have for a better world.

“Teach this triple truth to all:
A generous heart,
kind speech,
and a life of service and compassion
are the things which renew humanity.”
-Buddha 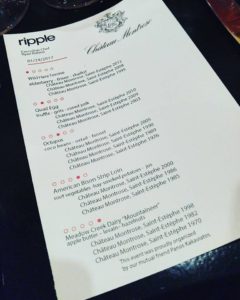 I’ve done something different with my tasting notes this time. Instead of giving full, individual notes, I thought it would be more interesting to give brief comparisons of the wines in each flight. The flights were arranged by Panos Kakaviatos and the Executive Chef, Ryan Ratino, with the consideration of pairing it with each dish as well as making an interesting flight by grouping newer and older wines. All bottles came directly from Château Montrose with the exception of 1989.

The 2012 was tight and firm yet had an attractive underlying sense of minerality, 2008 was gorgeous and simply breathtakingly balanced (originally, this vintage was underrated but later many Bordeaux lovers had come to sing its praises) and the 1995 was showing its age with intense savory notes, yet its supple body made it simply enjoyable for those who like lots of earth and little fruit – a vintage that does not make a pronouncement of sophistication but rather gives a warm handshake of enjoyment.

Of course, 2010 and 2009 were stunning and showed the greatness of each vintage while highlighting the different qualities, such as the ‘10 having lots of structure and ‘09 having lots of flesh. The 2003, a hot vintage, and many think the wines are over the hill at this point, was in a tough lineup with some outstanding vintages yet it was still fresh with a plusher body.

The 2005 has a New World glycerol, lush quality with sweet cherries and many of the traditionalist wine drinkers in the room said they liked it but it wasn’t Bordeaux to them, and certainly not a St. Estèphe super-second like Montrose, but although I prefer more structure I found its uniqueness refreshing. The 1990 was pretty with a pure raspberry note (surprising considering its age), 1989 was more savory and tight although seemed a bit closed still (89 was the only vintage that didn’t come directly from the Château and was generously donated by Panos and a couple other collectors so there might have been bottle variation), and the 1976 was my favorite – biggest shock of the night. ‘76 was known as a hot year and many wines from that vintage are now considered past their prime (dried out), but this one was bright with beautiful blackberry notes with hints of tar and leather that added to its complexity – Hervé said Montrose picked their grapes early that year and it certainly is still paying off.

2000 was singing and generous with a great sense of place displayed by hints of crushed gravel, 1986 was tight and austere – Hervé noted that he actually preferred not decanting this vintage (all bottles where double decanted at least a couple hours before tasting), 1985 gave animalistic notes of seared meat balanced with stewed plum notes and  paired well with the Bison.

1998 had manicured tannins and complex aromatics of forest floor and pencil lead, 1982 had rougher tannins with a hint of herbaceous quality on the finish that was best with the cheese and the 1970 (a vintage that is known for bottle variation) showed nicely with real charm, expressed by floral and spicy aromas and fine tannins dancing across the light bodied palate.

Celebrating Wine, Life and Inspiring Colorful People in New York City and Beyond!
View all posts by damewine →
This entry was posted in Dame Wine and tagged Bordeaux, Humanity, Left Bank, Montrose. Bookmark the permalink.