Can Bordeaux make a comeback? 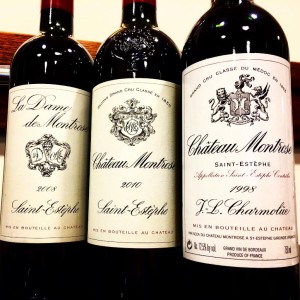 We had a staff tasting on July 14th (Bastille Day!) with Hervé Berland, who was the managing director of Mouton Rothschild since 2006, and with the Rothschild family since 1977, and after his retirement from Mouton, he became the managing director of the second growth Montrose in Saint Estèphe starting in April of 2012. Originally, I was planning on writing a blog focusing on the Montrose style before the mid 1990s vs their current style today, and my impressions of the wines I tasted.

Well, as always, my mind starts thinking about other topics that are related to Montrose and Bordeaux as a whole. And my mind kept going back to the current attitudes regarding Bordeaux, and my experiences with those attitudes. But don’t worry, I go through some notes about the Montrose tasting at the end of this blog.

First, I need to address that there seems to be a big divide between those wines which are considered the top (Grand Crus Classés and unclassified greats such as Pétrus), and the rest of Bordeaux. The “top” end wines during the great 2009 and 2010 vintages accounted for 3% of production but over 20% of value. Interestingly enough, the Syndicate of Bordeaux, who represents over half of the AOC Bordeaux/Bordeaux Supérieur producers, reported in 2012 that 90% of their members (around 2000 producers) were in financial difficulty and 50% reporting serious financial stress. These facts certainly dispel the idea that Bordeaux is filled with only wealthy Châteaux owners.

Alternatively, one may argue that these lesser known wineries called Petit Châteaux (defined as properties that are modest, not so much in their extent, as in their reputation and price), were dependent on the fine reputation of the top wines. As the rug has been pulled out from under the top wines’ feet, so to speak, maybe Bordeaux has realized over the past few years that they need to reach out to all consumers, broaden their reach, and expand their idea of a “Bordeaux drinker”.

I saw an article that was placed by another blogger on the internet… a past article from the New York Times (NYT) from May in 2010 called, “Bordeaux Loses Prestige Among Younger Wine Lovers”, and then followed by another post that showed a NYT’s article that was published almost three years later, “On the path from disdain to delight”. Re-reading these articles, especially back to back, made me think specifically of the roller coaster relationship that New York City has had with Bordeaux over the past few years.

It may seem absurd to some that in one article it seems that younger wine drinkers are over Bordeaux as a whole, and three years later, those same influencers of the New York City younger wine scene, such as Paul Grieco of Terroir Wine Bar and Summer of Riesling fame, were changing their minds about the idea of ever placing a Bordeaux wine on their wine list.

But New York City is a very dynamic city, always changing, and the feelings in regards to Bordeaux wines at any price point are mixed. I can talk about my own personal experiences of feeling, in some circumstances, that I had to be ashamed for loving Bordeaux. I have been hesitant in the past to admit to some self proclaimed younger “wine nerds” in NYC that I get excited not only for having a chance to taste “top” wines, but also tasting a great Petit Château at an incredible price. I did not want to hear their preaching about how Bordeaux is not for wine nerds. There was the attitude that unless you were talking about some obscure region, then you weren’t considered part of the group.

My heart, first and foremost, belongs to Burgundy, and I love wines from the Jura, Georgia, and I am even getting into Serbian wines. But why do I still have to feel that when I’m around these younger self proclaimed “wine nerds” that I have to feel guilty about getting excited about Bordeaux. I have even had consumers who have come into my store, a very traditional established wine store, saying that they had just come from a “cooler, more hip” store from down the street (they bought some grower Champagnes), but came to our store for great value Bordeaux wines. When I ask these customers, “Why didn’t you just buy some great value Bordeaux wines from that store? They have to have them.” And inevitably, they always say that either they have asked and received a reply that made them feel that they were not truly interested in wine if they asked for such a obvious region, or they were too afraid to ask because they were fearful that they were going to get that reply.

In defense of this store, I’m sure the management and employees have their side, and all of us know who have worked in any type of service industry, that something a wine sales person may say can certainly be taken the wrong way by a customer. But the point I’m trying to make is that I have met many people like myself, 45 and under, who love Bordeaux, but feel when they are hanging downtown with a hipper crowd, that it becomes a dirty word that you must never speak.

Also, one may argue that Bordeaux has not been reaching out to all wine directors and consumers equally. Paul Grieco’s attitude started to change about Bordeaux simply because he was receiving calls for the first time from Bordeaux producers. It is certainly fair for a wine director to say that they do not represent a region on their list, because it seems that the representatives and producers of that region do not care about their restaurant/wine bar, and hence, do not care about their patrons.

Yes, pricing for the top wines of Bordeaux needs to become more realistic, but there is a lot of value in the rest of Bordeaux, which makes up at least over 95% of production. And do not even get me started about the en primeur campaigns, I will save that for another time.

But there needs to be the excitement stirred by someone who will be the evangelist of Bordeaux. Someone who will respect the traditions and history (like one would do for Georgia wines), but bring a raw energy that will intrigue consumers to come back, or in some cases, at least try them out. Yes, it is a cliché, “what is old is new again”… Bordeaux becoming more like Napa has not worked, love Napa wines, but then why not just drink Napa if that’s what you want. Celebrate what makes Bordeaux unique.

I want more diversity with wine in the world. I never want to go back to the days where only a few regions were represented on an international scale. But I do not want a region that is a big part of shaping the evolution of the wine trade, wine criticism, and wine collection to just fall off the map in generations to come. So I am hopeful that there is a Bordeaux charismatic evangelist out there, who will take us from the darkness into the light. I am hopeful… 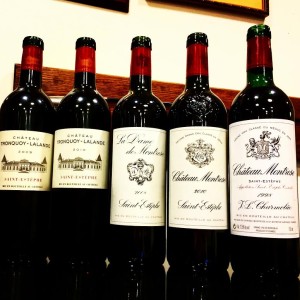 My Montrose tasting on July 14th, 2014 with Hervé Berland.

Here are some interesting facts:

This is considered the “youngest” of the cru classe vineyards. Supposedly during the 1855 classification there was some controversy that Montrose was chosen as a 2nd growth and Calon-Ségur only classified as a 3rd growth, since it was considered superior at the time; perhaps due to it being longer established, and not necessarily due to quality.

Montrose for a time was off putting to some Bordeaux drinkers due to its “stemmy” tannins. The surprisingly very good 1994 vintage changed the minds of many traditionalist critics in regards to their quality, and the vintage was proof that they had significantly improved their techniques in the vineyard and winery.

Montrose has had to live in the shadow to the other Saint Estèphe great, Cos d’Estournel. It was one of the first “super-seconds” because of the brilliance and hard work of Bruno Prats. But I have always loved the more animal, gamy quality of Montrose.

Today, Montrose has dropped their carbon footprint by 80%, and they have added solar power. This is part of the revolution of Bordeaux trying to become more environmentally friendly.

Why is Montrose “new again”?

Besides the environmental consciousness, I feel their old style is new again. Yes, they have changed some aspects, and for the better. Their old style of green, stemmy tannins was never considered a mark of high quality, but they still have that unyielding tight tannic frame that I find thrilling. It makes you work for it a bit, finding the layers of flavors, and even a young Montrose is enticing, because its style is becoming a rarity in current wine consuming times. (yes, I know it is a crime to have it young, but it is part of being in the trade, tasting wines when they are first released)

Here are my tasting notes from that day of Montrose, second wine Le Dame de Montrose, and Tronquoy-Lalande (which is also owned by the current Montrose owners, the Bouygues brothers).

-2010 Tronquoy-Lalande (50% Cabernet Sauvignon, 40% Merlot and the rest Petit Verdot): This wine was singing! I cannot believe how open it was… intense pristine blackberry and purple floral notes, noticeably tannins, but more supple than the 2010 Montrose.

-2009 Tronquoy-Lalande (51% Merlot, 42% Cabernet Sauvignon and 7% Petit Verdot): The 2009 was closed.. I would have thought the 2010 would be more closed, but was not the case on this day… mainly dusty earthy notes, great texture with full body and nice backbone of structure. Would like to have it again, maybe after several hours of decanting.

-2010 Montrose (54% Cabernet Sauvignon, 37% Merlot, 8% Cabernet Franc and 1% Petit Verdot): Yes, this was a monster, but the tannins were ripe without being overripe… going back to the thrill of having a wine that does not completely surrender to you right off the back.. but the tannins were not too much for me, I have a high tolerance for tannins.. and yes, it is far from its peak, but I still enjoyed it..

-1998 Montrose (Do not have the exact break down of varieties, it was said that it would not differ much from previous vintages): This was not a great vintage, but I was in love with this wine.. this reminds me of being in my early twenties and tasting good Bordeaux for the first time (over 15 years ago).. it had the perfect balance of gamy, animal notes (different than Burgundy animal notes) with fully integrated tannins, a light velvety texture (soft but still some noticeably texture), and those cedar, tobacco leaf, gamy notes filling my head with still some fruit left.. yes, this wine is in its peak, will continue to hold, but was in the best stage it could be.. a true pleasure..

Celebrating Wine, Life and Inspiring Colorful People in New York City and Beyond!
View all posts by damewine →
This entry was posted in Dame Wine and tagged Bordeaux, Montrose. Bookmark the permalink.