The Beauty of Surrendering to Burgundy

Posted on January 27, 2017 by damewine
ShareTweet

It is not easy to plan out our lives. Sometimes we don’t realize the realities of certain things involving choosing a particular path, or other times, we don’t realize that we are capable of handling extraordinary challenges. Many US expats reveal to me that there was never a strong need or desire to live in a foreign land but it was more of their personal journey guiding them over time in a direction and place where they never envisioned their future to be. 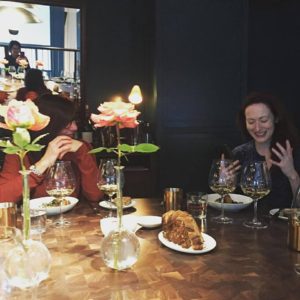 Megan McClune (left) and I (right) discussing her life and wines

Last week, I was able to have lunch in New York City with Megan McClune, director of Domaine Jessiaume in Burgundy. I knew from the first moment I met her that it was going to be a relaxed and enjoyable wine lunch simply by her energy. She had the ease and grace of someone who was grounded and happy with her life – no need to prove or compete – just joyfully embracing the journey and those who find themselves in her presence.

I was extremely curious to know how an American woman ended up being the director of a Domaine in Burgundy, France – certainly unique. Megan had always had a love for wine and that was consistant through her time as being a finance director for restaurants. A chance meeting in Boston with Alex Gambal, winemaker/owner of Maison Alex Gambal, charted her life in another direction. In 2004, she and her husband, abstract artist Matt McClune, together decided that they should move to Burgundy on a stint as a financial consultant for a project with Gambal, just for 6 to 12 months. Although initially struggling with the language and finding a place in the community was tough, they started to form roots. They were able to prove to the locals that they respected the history and culture, and over time, many started to embrace her, her husband and their two children.

Domaine Jessiaume is in the Côte de Beaune in Burgundy and includes 9 hectares (22 acres), mainly in the village of Santenay, as well as premier cru and village parcels in the villages of Beaune, Pommard, Volnay and Auxey-Duresses.

Domaine Jessiaume was bought by Sir David Murray in 2007 – a remarkable man that was born in Ayr, Scotland, and formed the company Murray International Metals Limited by the age of 23. A tragic event, losing both his legs in a car crash at the age of 25, did not dampen his spirit as his company became the leading distributor of structural steel in the world. A man known to be passionate about wine has stated that it is a “personal privilege” to own Domaine Jessiaume and he has invested so much of his resources to bring back its former glory. His son, Keith Murray, who has a specific interest in agriculture, now oversees Domaine Jessiaume.

Megan McClune ended up working for Alex Gambal as his director of finance and sales for 10 years. As she became more curious and involved with knowing about the viticulture and winemaking aspects, she felt she was ready to be part of shaping Burgundy and that’s when she saw an ad for director at Domaine Jessiaume. She sent her resume – yes, the old fashioned way still works – and ended up talking to Sir David Murray in Scotland. He was impressed with what he saw on paper but he wanted to know what kind of person she was… and that was the beginning of a beautiful working relationship. 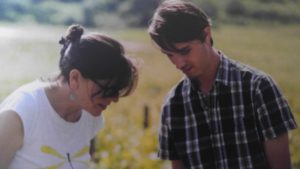 Megan and William in the vineyards

Megan was simply glowing when she talked about their vineyards and bringing back biodiversity with organic treatments – they will be certified in 2019. She works closely with their young winemaker, William Waterkeyn, to constantly push him to use indigenous yeasts, less sulfur and experiment with oak regimes depending on the vintage. Because he is rooted with a strong science background, sometimes he is afraid but Megan is able to inspire him to believe that he is capable of excelling outside of the conventional structure he was taught within.

Megan says she would never have imagined that she would be running a winery in Burgundy, but now, she can’t imagine herself living any other kind of life. None of us know where our life will bring us, or what hidden talents are hiding within us – like a caterpillar that has not yet become a butterfly. But that caterpillar will never be given a chance to become a butterfly unless it surrenders to those astonishingly, magnificent colors that are within all of us.

100% Chardonnay & 390 cases produced. I have to say for a Bourgogne this had a nice sense of minerality with a keen acidity that lifted the lemon peel and floral notes.

This white ‘regional’ Burgundy wine is called Maison Jessiaume since the Chardonnay is sourced from one of their tiny plots in the southern part of the Côte de Beaune in Burgundy as well as from neighboring growers who share their philosophy. “Bourgogne” level burgundies are the only wines allowed to note the grape variety on the label, yet for the most part, it is usually easy to guess the variety in Burgundy since the whites are typically Chardonnay (exceptions such as Sauvignon Blanc and Aligoté do exist) and for the most part Pinot Noir for the reds (even though there are a few wines that have some Gamay blended). But Burgundy is the epitome of showing how wine reflects a place – Chardonnay and Pinot Noir are the ideal vessels to show site since they have such an affinity for expressing terroir.

The following wines all come from vineyards that are owned by Domaine Jessiaume: 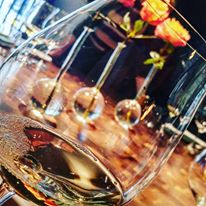 -2014 Domaine Jessiaume, Auxey-Duresses Les Ecussaux, 1er Cru Blanc ($42): 100% Chardonnay & 72 cases produced. From .31 hectare (.77 acre) in the premium cru Les Ecussaux vineyard in the village of Auxey-Duresses from vines that are 26 to 30 years old. Only 15% new oak. Aromas of roasted almonds and white peach invite one into the glass. Good weight and flesh that it delivered with elegance with marked acidity and a distinctive chalky hint on the finish.

-2014 Domaine Jessiaume, Santenay, Clos du Clos Genet Rouge ($30): 100% Pinot Noir & 196 cases produced. From .53 hectare (1.3 acres) in a vineyard named Clos du Clos Genet in the village of Santenay from vines that are 35 to 55 years old. Sweet cherries and spice has a touch of grip on the palate that produces a structured wine that gives one a chance to really get into those delicious flavors. 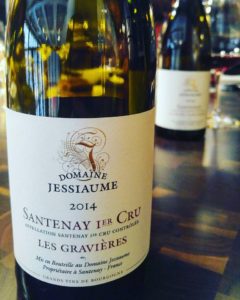 -2014 Domaine Jessiaume, Santenay, Les Gravières 1er Cru Rouge ($40): 100% Pinot Noir & 570 cases produced. Domaine Jessiaume owns the largest vineyard holdings in the Les Gravières 1er Cru. From 4.76 hectares (11.76 acres) in the premium cru Les Gravières vineyard in the village of Santenay from vines that are 19 to 89 years old. Darker, more introspective fruit with black raspberry, a lush body with silky tannins and a refined mineral laced finish. This is a type of wine that draws one in to get lost in a fantastical wine mediation. 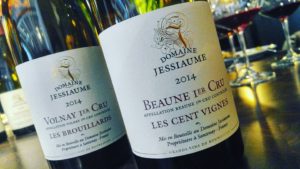 -2014 Domaine Jessiaume, Beaune, Les Cent Vignes 1er Cru Rouge ($45): 100% Pinot Noir & 300 cases produced. From 1.16 hectares (2.87 acres) in the Les Cent Vignes premium cru vineyard in the village of Beaune from vines that are 35 to 70 years old. Wild flowers and cherry blossom dance in one’s head with a powerful body and rich concentration that is carried throughout the long finish.

Celebrating Wine, Life and Inspiring Colorful People in New York City and Beyond!
View all posts by damewine →
This entry was posted in Dame Wine and tagged Beauty, Burgundy, Domaine Jessiaume, Surrendering. Bookmark the permalink.