Quality from All Points of View with Cecchi Wines

Posted on October 13, 2016 by damewine
ShareTweet 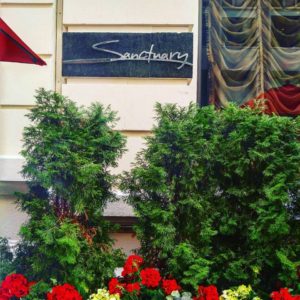 I learned a new expression in Italian during my intimate lunch with the immensely charming Andrea Cecchi: “A Tutto Tondo”. While he was explaining his family’s philosophy of their wine business in Tuscany, first started in 1893 by Andrea’s great-grandfather, he said the best way to explain it was this phrase. He then drew a circle on a piece of paper and said it meant “quality from all points of view”.

Valuing Tradition While Seeing the Benefits of Newer Technology

Cecchi Winery is like many other well-established, quality minded producers, with their respect for keeping a style that was created by generations before them, yet they also understand the importance of modernization so they can keep a consistent quality year in and year out, which was impossible for previous generations.

It was fitting to have our discussion take place during the 300th Anniversary of Chianti Classico, since Cecchi has been one of the producers at the forefront of research to improve quality in this historic area. In collaboration with the University of Pisa Faculty of Agriculture and the University of Florence, Cecchi was one of the five estates that donated an acre of its own vineyards to the study of Sangiovese clones, and dedicated a portion of its winery in Castellina, Chianti to the producing of test wines.

Only as Strong as Its Community

One of the best ways Cecchi displays its commitment to old fashioned values with modern sensibilities is their idea of keeping water clean for the community. Wastewater is a big issue for wineries, with many dumping water used at the winery with a BOD (Biochemical Oxygen Demand) of 2,000 mg/l and up to 10,000 mg/l in some cases.  As a point of reference, a human sewage registers around 150 to 300 mg/l. But what is BOD? BOD accounts for microbes living in waterways that will deprive other life of oxygen. This has become a great concern for California wineries over the past few years, yet Cecchi has had a longtime presence of innovative systems to treat this water and create healthy wetlands that benefit the already existing life.

Andrea said that his family business and the community is one, and one cannot prosper without the other. The saying “quality from all points of view” aka “A Tutto Tondo”  not only means that they are taking care of everything that influences the wine: vineyards, winery, etc… but in the true meaning, Andrea said that from everyone’s perspective it is quality because everyone benefits.

The World is a Smaller Place 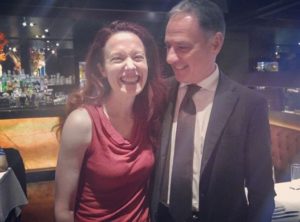 Even though Andrea Cecchi was grounded in good old values, it was also nice to see him earnestly into social media, being a social media junkie myself. He believes in the internet as a way to impart the “A Tutto Tondo” philosophy, connecting with various people around the world in a positive way. At one time it was just the local community, or tourists, connected to a winery, but today, everyone can make a positive impact on other people’s lives through social media.

As we sat there with our conversation ranging from the early 1200s, to Facebook and Instagram, we were both so thrilled to learn from each other and to connect and grow as human beings. He told me how much he loved social media, even though he just started getting into it a few years ago, because he believes it keeps him young. And isn’t that the idea? To have centuries of experience while still feeling the excitement and enthusiasm that the best is yet to come.

While I walked down the streets of Manhattan, beaming from my energizing experience with Andrea Cecchi, I was filled with a great feeling that although we are currently on a bumpy ride as the world becomes a smaller place, the wealth of opportunities for everyone around the world to connect, improve and grow will make the turbulent ride of social media well worth it.

Maremma is in the southwestern part of Tuscany, bordering the Ligurian and Tyrrhenian Seas. The labels of the following two wines have a picture of a horse on it. Wild horses are common in this area and so it is an homage to these beautiful, free creatures. These horses also play a vital part in the culture of Tuscany with the Palio di Siena, an historical horse race held twice a year that has been celebrated for centuries. Siena, at one time, rivaled Florence’s claim to being Tuscany’s capital city; even though Florence eventually won that title, it is still a very special place that has preserved the wonderful history of this area with a walled city that does not allow cars within the center of town. It is a “must see” tourist’s stop if you are in the area. Even though Cecchi makes wines in various areas in Tuscany, their home is located in Siena, and so another reason the horses are significant.

-2014 La Mora Vermentino, Maremma Toscana DOC ($19): Majority Vermentino. Vermentino is the signature white grape of the island of Sardinia and it has a distinct white, stony minerality. It still has that mineral note in this Cecchi wine from Maremma but it has more fleshy peach which gives it more weight.

-2013 La Mora, Morellino di Scansano DOCG ($23): 90% Sangiovese with 10% other red grape varieties. If someone wants a wine that has a little bit of Old World charm with New World friendliness, that won’t break the bank, then you can’t go wrong with Morellino, and this is a delicious example with cassis and floral notes that are very generous.

Andrea Cecchi was touring the USA for various celebrations of the 300th Anniversary of Chianti Classico. In 1716 the Medici Grand Duke, Cosimo III, declared the boundaries of the Chianti wine growing region and established an organization to control wine production and to guard against fraud. Actually the trademark black rooster on the neck of Chianti Classico goes back to the rivalry between Siena and Florence. At one time, the area between these once separate republics was called “Chianti”. In the early 1200s, they decided to establish boundaries by releasing two roosters to meet in the middle of the Chianti area, and so the rooster has a long established connection to Chianti, as well as being part of the historical importance of that region.

The Cecchi winery is located in Castellino in Chianti, one of four municipalities entirely within the historical boundaries of the Black Rooster area – the black rooster being the one that won.

-2014 Chianti Classico “Storia di Famiglia”, Chianti Classico DOCG ($21): 90% Sangiovese with 10% other red grape varieties.  This wine was light and lively on the palate with a stronger floral note (violets) than the Morellino, and a touch a spice. A pretty wine.

Cecchi considers their Riserva di Famiglia to be their flagship wine.

-2013 Riserva di Famiglia, Chianti Classico DOCG ($41): 90% Sangiovese with 10% other red grape varieties. A more powerful wine that has rich flavors of plums and sweet fruit with an overall more complex nose – hints of fresh leather and cardamom spice. The tannins are more evident giving the wine a solid structure and drive. Even though it is drinking nicely now, with food, it will only get better over the next few years.

Celebrating Wine, Life and Inspiring Colorful People in New York City and Beyond!
View all posts by damewine →
This entry was posted in Dame Wine and tagged Cecchi, Chianti, Italy, Tuscany. Bookmark the permalink.