Posted on November 13, 2015 by damewine
ShareTweet

I guess my first introduction to Sangiovese was like many others’ – mediocre Chianti with sharp acidity and grainy tannins that demanded food. Many of us can say that not only have the wines of Chianti come a long way, but Sangiovese as a grape variety has greatly improved with better clones and practices in the vineyard.

In this article, I’m going to just focus on Sangiovese from Tuscany. This is mainly due to the fact that I recently attended a trade wine lunch for Morellino di Scansano and Montecucco wines, but also, I think all of us can agree that Tuscany is the home of Sangiovese. 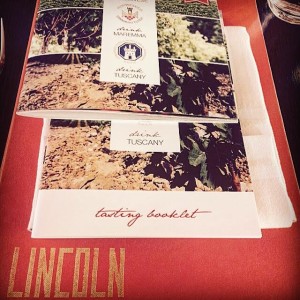 When thinking about Sangiovese, how can we not think of Chianti? It doesn’t matter how much you know about wine, or how many different wines you have tasted, the two will always be linked.

Sangiovese is one of those grapes that many wine drinkers around the world have experienced. Maybe they do not know it as Sangiovese, but they will certainly know the name Chianti. This may be fitting since Old World is traditionally more about place than grape. Everyday Chianti commonly has fierce acidity, gritty tannins and a sour cherry flavor on the palate. Of course, there are higher quality sub-zones, such as Chianti Rufina and Chianti Classico. But they are also wines that need food (not such a bad thing) and have acidity that cuts like a knife – something I have always loved about these wines but I know is not for everyone.

I should also add that back in April, I attended a seminar which Giovanni Busi, President of Consorzio Vino Chianti. He stated that they have spent around 30 million Euros over the past few years in trying to improve quality in the vineyards as well as helping to market the name.

I do find it interesting that at one time, Chianti could not even be 100% Sangiovese, actually there are disagreements over whether it was a good or bad thing to allow blending of other varieties. Some of the allowed grapes were just cheap blending options (while I know some Chianti enthusiasts will defend Canaiolo when grown properly) some say Sangiovese always shows its best when a little bit of an appropriate grape is added.

Not so Easy to have Generalizations for Sangiovese

I have to admit, I have had my ignorance about Sangiovese. There is Brunello di Montalcino, but Brunello is another animal. It feels wrong to compare it to Chianti. It is always mind boggling to me that they are a single variety Sangivoese wine (Brunello having to adhere to 100% Sangiovese for the DOCG qualification). I was always told that Brunello was so distinctively different because the Sangiovese Grosso clone was used. But that it not completely correct….

In May of 2014, my husband and I visited Castello Banfi’s estate in Montalcino and learned that there are many clones that have been chosen for the ideal style of Brunello.

Some Sangiovese clones are better for quantity and some better for quality. And even within the quality clones there are great differences. As a whole, Tuscany has improved their clones… but enough nerd talk, let’s talk about how Sangiovese fairs in various places in Tuscany.

Brunello di Montalcino typically has a rich body, big tannins and lots of ripeness and flesh. It typically needs time to age, but some of the best could easily go toe to toe with a great Barolo. Brunello would be an argument for Sangiovese being able to stand alone – or maybe not…

Even in the esteemed world of Brunello there has been Sangiovese controversy.

There were two major events that shocked the wine world in New York City in 2008: first, the economy came crashing down, and second, reports that a few Brunello producers had been blending Cabernet Sauvignon, Merlot and/or Petit Verdot into their lesser vintages. I do not mean to stir the pot about something that happened 7 years ago, especially since the US government started requiring that Brunello shipments needed to be accompanied by laboratory analysis demonstrating that the wine was 100 percent Sangiovese.

I bring up the past because some producers obviously believed that 100% Sangiovese could not make a great wine year in and year out – it needed a little help. So again, Sangiovese’s capacity to stand on its own is still in question.

So what did I learn during the Morellino di Scansano and Montecucco tasting?
That the diversity of Sangiovese is endless. 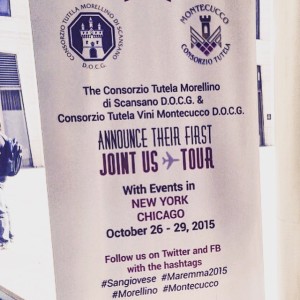 Initially, I intentionally did not drink these wines with food, even though a lovely lunch had been provided. The wines were lush and fleshy in a way that I had never experienced with Sangiovese – they were generous. The acidity was still evident, they were fresh and were very nice with the food… but I cannot get over how friendly they were on their own. During the tasting, two of the Morellino wines were 100% Sangiovese and four ranged from 85-90% Sangiovese. This area usually has no issues with ripeness since it is close to sea level.

Some of the Montecucco vineyards are as high as 1970 feet (600 meters) so the wines can be quite elegant. All of the wines share an underline note of minerality. The idea of minerality existing in these wines is enhanced by the knowledge of the lava composites in the soils – even though I know minerality does not directly come from the soil, it is still interesting to think about it.

The producers have many shared philosophies: 68% of production is organic. Since they have only started to receive official quality recognition since 1998 with a DOC for Montecucco, 2011 DOCG followed for Montecucco Sangiovese, it will be interesting to keep an eye on this little area tucked away in Tuscany.

Montecucco is also an area that is committed to producing Sangiovese dominate wine. During the tasting, three of their red wines were 100% and two had a range of 80% to 85%.

So, can Sangiovese stand alone?

Brunello di Montalcino was the first to convince me that Sangiovese could stand alone at fine wine prices (as long as you waited to drink it at least 5-6 years, maybe longer depending on the vintage) as well as its more affordable baby brother Rosso di Montalcino (which could use some decanting and food since it can still be a little chewy).

But Morellino di Scansano and Montecucco convinced me that Sangiovese dominate wines can reach a broader audience beyond Chianti lovers with more moderate pricing ranging from USD $20-$30.

I did enjoy the wines that were blended with Cabernet Sauvignon, Merlot, Alicante, Canaiolo and/or Ciliegiolo. I have always believed in allowing producers to express their own creativity. But Sangiovese can stand alone in these wines, and stand alone with or without food and offer various styles that satisfy a multitude of tastes around the world.

Sangiovese was one of those varieties I thought I was able to sum up a long time ago, but it has turned out to be one of the most wonderfully beguiling varieties, keeping me on my toes.

-2014 Ribusieri, Chiaranotte, Montecucco Vermentino DOC:
This wine has nothing to do with Sangiovese, but it was fun to kick off the lunch with a Vermentino from Montecucco – talk about intense white stony minerality, and additional aromas of white peach and blanched almond made this a lovely surprise

-2014 Terre di Fiori, Morellino di Scansano DOCG:
(100% Sangiovese)
A nice balance between earthy and fruit flavors with a round body

-2013 Campinuovi, Montecucco Sangiovese DOCG:
(100% Sangiovese)
It was interesting to see that this wine had more richness and body than the previous wine with 5% Cabernet Sauvigion, which may be due to the vintage

-2012 Erik Banti, Ciabatta, Morellino di Scansano DOCG:
(90% Sangiovese and 10% Cabernet Sauvigon)
Blackberry with more linear shape than other Morellino, regal with available fruit, such as a much beloved King or Queen

Celebrating Wine, Life and Inspiring Colorful People in New York City and Beyond!
View all posts by damewine →
This entry was posted in Dame Wine and tagged Montecucco, Morellino di Scansano, Sangiovese, Tuscany. Bookmark the permalink.