Posted on October 29, 2015 by damewine
ShareTweet 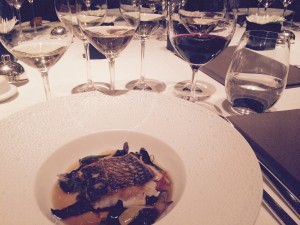 Loud laughter, an electric energy and lots of smiles filled our table of seven people for an intimate dinner with Alain Dominique Perrin, the owner of Domaine de Lagrézette, at Le Bernardin. We were there to meet Mr. Perrin with his Managing Director & Enologist, Claude Boudamani, and to taste a vertical of their Viognier wines on October 15th. Happily we were able to taste their Le Pigeonnier Rosé and Malbec red wine as well.

I had been to Le Bernardin for wine dinners in the past but I had never felt as at home. Simply put – I had a blast that night. It was a great evening with colorful stories that were fleshed out with the incredible life that Alain Dominique Perrin has lived. He has the ability to make you feel immediately at ease when you initially approach him. That evening, he proceeded to take us on a journey of his unique life that was filled with so much beauty – antiques, the restoration of Château Lagrézette, design and art.

Mr. Perrin is famous for helping to turn the fortunes of Cartier around, and also for leading the Richemont group, which is considered one of the largest luxury goods groups in the world. His initial dream was to buy a grand château with a long history and breathtaking view – after looking at over 100 properties, he settled on Lagrézette, in Cahors located in Southwest, France. 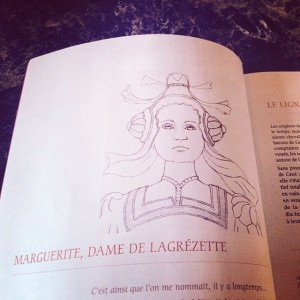 His majestic home is filled with many carvings that came with this grand 500 year old estate, but the one that caught my eye when I was looking through a book that contained the Château Lagrézette sculptures, coats of arms and decorations, was the carving of Marguerite, Dame de Lagrézette (Pictured above). It is said that though men built Château Lagrézette it was women who had given the château its soul. And this place is Alain Dominique Perrin’s home, a home in which his children, grandchildren and dear friends make beautiful memories.

The purchase of this property has changed his life in many ways as it included the rights to the plantation of vines. Through time he has acquired other vineyards in the Cahors area with an attitude to always strive to be better by surrounding himself with very talented people. And by surrounding himself with top wine experts, he has discovered through time that there were great variations in the soil within the same vineyards – and so that is why he has varieties other than Malbec planted, such as Viognier.

Viognier is a white grape variety that is capable of making intensely aromatic wines with a rich body and moderate to sometimes low acidity. This currently widely planted vine was almost unheard of not that long ago. Viognier has not only taken off in certain areas of California and Australia, but there are also good examples in South Africa and New Zealand. It is used as a blending grape, for co-fermentation or as a single variety. But it is a tricky variety in the vineyards and winery – it can quickly become lifeless, and span the range between overtly perfume-y to a bland white.

I first fell in love with Viognier through the wines of Condrieu. The Rhône Valley, France, is where Viognier has legitimized itself with traditional fine wine drinkers. But through time these wines have seemed almost a little too reserved for such an expressive variety. Conversely, the New World versions are certainly intoxicating with pronounced aromatic intensity but I commonly miss the sense of place.

The 2011, 2012 and 2014 Domaine de Lagrézette Mas des Merveilles and the 2014 Le Pigeonnier “White Vision” Viognier wines I tasted during our dinner were finally the Viognier wines I was looking for – they were the balanced expression of place and variety. And they were from Cahors – an area known for their big, robust Malbec red wines! How could that be possible?!

That leads me to the biggest surprise of the night – the 2011 Le Pigeonnier Malbec.
I have to admit that even though I love Malbec wines, I honestly never saw the grape on the same level as its Bordeaux brothers: Cabernet Sauvignon, Merlot or even Cabernet Franc. I have had very good Malbec wines from Argentina and Cahors but I haven’t had an outstanding 100% Malbec wine. Also, through my wine career I have heard many times from top Bordeaux owners, as well as Managing Directors, that Malbec was not considered a noble variety and hence why many top châteaux in Bordeaux no longer have it planted in their vineyards.

I remember sitting in a classroom in Bordeaux a few years ago with Denis Dubourdieu, a famous Professor of Oenology. He said that Malbec was a variety for peasants. And even though I did not fully agree with him at the time, I did think that Malbec had a limited potential.

Well, Mr. Perrin said that he knew that Malbec could become a great wine, and Cahors a great wine making area – and he proved it that night. The Le Pigeonnier Malbec really impressed me. It was intensely concentrated while staying incredibly elegant. And it was perfectly paired with a crispy black bass with wood ears and a black truffle “hot and sour pot au feu” (Pictured at the top of this post).

Why was it a perfect pairing? Because it showed that this richly ripe Malbec had the great structure and balance to go with such a refined fish dish. It had power and finesse. And in that moment of having this unorthodox pairing I realized that Malbec was, indeed, a noble variety.

A Passion for Mixing the Ancient & Modern Worlds

Mr. Perrin showed us that night that the ancient and modern worlds could live in perfect harmony. It was only fitting that we had this incredible tasting at Le Bernardin – in part because of Mr. Perrin’s long relationship with the owners Maguy Le Coze and Chef Eric Ripert. It was also fitting because Le Bernardin is a great example of combining traditional French cooking techniques with more modern styles of creating complex broths with layers of aromatics in the dishes that give a healthier, elevated experience.

When I walked out the door of Le Bernardin that night, after my dinner with Alain Dominique Perrin, I was walking on cloud nine so to speak. The conservations all around were uplifting, exciting and fun – the food was outstanding and the wines enlightening. Mr. Perrin seems to have a way of bringing everything to a level of greatness. He not only shoots for the stars but he eventually reaches them.

A pretty pink color with real restraint on the nose that has a distinct minerality with lovely floral notes and a round body; juicy peach flavor on the palate.

-2011 Mas des Merveilles Viognier :
The 2011 was the most linear in shape with a more mineral than fruit quality compared to the other vintages. A hint of dried flowers rolled around in my head on the heady finish.

-2012 Mas des Merveilles Viognier :
Lots of pristine apricot and tangerine flesh-y aromatics and flavors with a textural complexity with the minerality more in the background.

-2014 Mas des Merveilles Viognier :
(They did not make a 2013 because the quality was not up to their standards)
Orange blossom and jasmine notes with a touch of wet stones and refreshing acidity.

Exotic spice with layers of rose, stone fruits and smoky notes that were intoxicating with a great weight perfectly balanced with lively flavors that have a long, flavorful finish.

Deep ruby color with a distinctive purple hue. A simply stunning Malbec that was powerful yet elegant, full bodied yet focused. An intense concentration of violets, plummy fruit and a hint of coffee that is carried along the ripe yet structured body that somehow pulls off a long finish that had lots of finesse.