A Truth in the Vineyards Tells Us about Our Own Truth

Posted on August 27, 2016 by damewine
ShareTweet 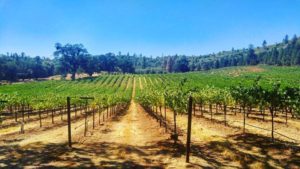 I am always amazed at how many things are connected to wine. How it not only inspires me but helps me on my quest to live a better, more fulfilling life. A specific instance of this happened during a post conference excursion from the recent Wine Bloggers Conference. As there were several choices, I took the one going to Ironstone Vineyards Winery, located in Murphys, which is located about an hour east of Lodi, California, this year’s location for the Conference itself.

Murphys, California, located in Calaveras county, is part of the Sierra Foothills AVA. It is referred to as the “Queen of the Sierra” and some have referred to it as “The next Napa (Valley).” Even though we only saw the Ironstone property and just a few of their vineyards, their property alone made an incredible impression with their remarkable amphitheatre, lake side park, museum and wine caverns. Quickly it became apparent why we were going to spend the whole day and evening there – there was so much to see and experience! 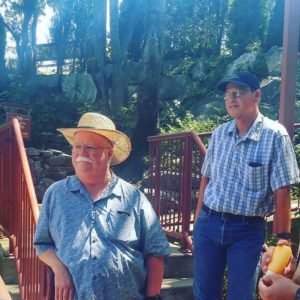 But it was a small remark that was made when we were in the vineyards with Steve Millier, Director of Winemaking, and Craig Rous, the Director of Operations & Planning for Bear Creek Winery (which is also owned by the Kautz family who own Ironstone Vineyards) which got my attention. The remark had to do with their trellising system for their vineyards and they simply said that they preferred a quad lateral trellising system for their grape vines. Sometimes they would need to use a bi-lateral system (you may have heard its other name “California Sprawl”) but they did not like using the VSP system (Vertical Shoot Positioning).

The Truth about Viticulture 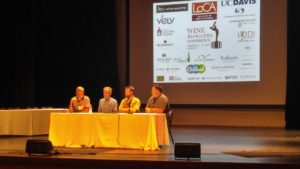 Chris Storm (third from left), Vititculturist of Vino Farms, talking during The Truth about Viticulture session

Don’t worry, I won’t make this post all about the ins and outs of canopy management. But I found this comment interesting due to the fact that just a few days earlier, during The Truth about Viticulture session of the Wine Bloggers Conference, a local Lodi Viticulturist said in regards to VSP, “That’s the worst system in the world.”

Wow! I wish he would have told us how he really felt. Hehehehe…

But seriously, I appreciate that kind of passion, and he was certainly telling his truth which was formed by his experiences and personal opinions. This truth came from Chris Storm, Vititculturist of Vino Farms, which owns or manages many of the vineyards in Lodi.

The topic of dispelling myths about Lodi came up and he associated myths with pet peeves. His major pet peeve in his own words was, “perception is driving too many decisions and not objective reasoning.”

That is when he said that VSP was the worst system possible, especially for Lodi’s Mediterranean climate. But I got the feeling that he was not happy about VSP being in any vineyard in the world. He said that he has struggled dealing with winemakers who taste with their eyes and not with their mouths. He was referring to some winemakers wanting to see a vineyard look a certain way: high and tight – Vertical Shoot Positioning is very clean in appearance. The aforementioned things, though, do not always translate into quality grapes, which ultimately are needed for quality wines.

He made the point that VSP takes an open canopy and “smashes” it all together. He related the leaves of the vines to solar panels, and that we would never point the panels vertically to the sun, but rather lay them flat to get the most sun exposure possible. He further made his point by saying that in this situation, the leaves would form many layers, and in the third and innermost layer there would be leaves that were no longer photosynthesizing because they were not getting proper light, which means they are not helping out the plant and they are instead just sucking out nutrients and becoming a parasite of sorts – take but does not give in return.

And let’s not get into lack of aeration. Have you ever grown a tomato plant in your apartment and allowed the stems and leaves to get really bushy? Did you then stick your hand in the plant to try to find a tomato? Well, I did, and all I found was mildew and rotten tomatoes! Obviously, we were not doing such a great job with canopy management with our tomato plant…. 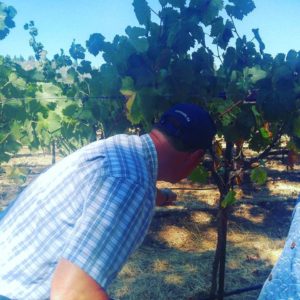 While touring one of Ironstone’s vineyards in the Sierra Foothills, I told Craig Rous what was said about VSP during the Conference.  He got a kick out of the whole rant -personally, he did agree with many of Storm’s points, but he also made a point to say that he has seen some other vineyard growers make it work in Lodi. He said that they had to do more work with canopy management, such as plucking leaves, and of course its success depends on variety type, vigor of soil and how much breeze and sunlight is available in any given plot. And there are many other variables for each situation that I could not cover in this one post.

Rous did think it was interesting that someone from Vino Farms was now saying they were against VSP, when at one time, they were an advocate for this trellising system. Chris Storm did mention that VSP was once said to be the ideal management choice for Lodi, as well as most of California. They were following what their more established Bordeaux brothers and sisters were doing in their own region (although their VSP systems are typically lower to the ground) thinking it would be ideal for Lodi as well. It has just taken time for California, and more specifically Lodi and the Sierra Foothills, to find their own way.

The Courage for Truth

Steve Millier and Craig Rous both agreed that while they did not use VSP in their vineyards, they could understand why many other vineyards still did. A commercial vineyard has a lifespan of around 30 years, and replanting a vineyard sooner than that would cost a fortune – money that many struggling vineyard owners do not have the luxury of spending.

I’m sure it was a big deal when Vino Farms (and many others) started to question a trellising system that was a huge part of how many locals grew their grapes. It is like when you are faced with certain unpleasant confrontational truths in your life, and you say to yourself, “Do I up-heave my whole existence for a chance at a better life or do I keep the status quo and not rock the boat?” We can only try to realize our own truths, not knowing if others will find it beneficial or helpful, and be satisfied simply with the fact that we are being true to our own selves. 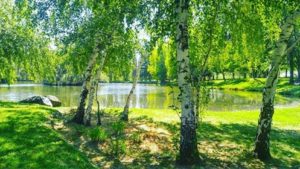 One of the many lakeside views on the Ironstone Vineyards property

The sentiment of being true to oneself was most evident when John Kautz, Chairman of Kautz Family Vineyards and owner of Ironstone Vineyards, was leading our tour of his magnificent property of Ironstone.  At one point, a few people, who were seemingly repeat visitors and had seen Kautz on multiple occasions while enjoying tastings and the beautiful lakes and scenery, approached him and asked if he was with a group of friends that day. He told them he was leading a tour. They were surprised and asked him if he worked at Ironstone Vineyards, to which he humbly said that he owned the place and was walking with a bunch of wine bloggers. I could hear them squeal with joy, “We never knew you were the owner!” It made me smile, because he seemed like he just loved seeing people enjoy the place and he would happily talk to them as just another wine lover, never bringing much attention to the fact that he actually was the owner.

It made me think – Mr. Kautz has figured out the truth of who he was a long time ago. He was someone who wanted to create things and places that brought joy to people and he was happy enough to sit back and watch people have the time of their lives. 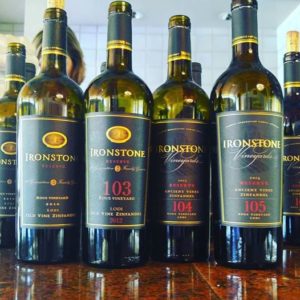 Their Zinfandel grapes come from the 10 acre (4 hectares), 105 year old Rous Vineyard, owned and managed by Craig Rous. His vineyard is found in the heart of the east side of Lodi’s Mokelumne River AVA. The tasting showed me that Lodi Zinfandel was not as ripe or lush as Paso Robles and tended to have more structure, which is not better or worse, just noticeably different. It is mind-boggling that the current vintage is only USD$35. Wow! That is what happens when perception does not fit reality, and in this case, this wine is highly undervalued.

-2013: Bright notes of plums and strawberries with a more noticeable acidity

-2014: Dried herbs with blueberry pie and firmer tannins than the other wines 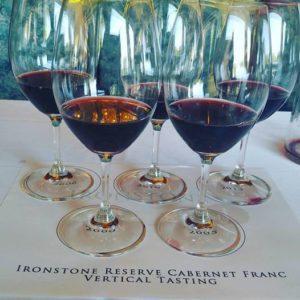 They wanted to show us how they could not only grow Cabernet Franc, but how their version ages as well.

Their Cabernet Franc vineyard is 2400 ft. (732 meters) above sea level.  The grapes are estate-grown at their Hay Station Ranch vineyard, in the Sierra Foothills, with warm days and cool evenings. Soil is granite mixed with volcanic sediment and red clay. Grapes have been grown in the Sierra Foothills for 150 years.

Steve Millier, Director of Winemaking, said that Cabernet Franc was always the last grape to be picked, even after Cabernet Sauvignon. He said, “Cabernet Franc wants to be out there watching everyone get done first, and when they’re all done it may decide to come in. No matter what kind of season you had it is always a battle right at the very end.”

-2010: A lot more tannins than previously tasted vintages with dark cherry notes, seems like this has a long way to go

-2013: A full body with sweet red fruit and cocoa powder laced throughout

Again, price is always a factor, and it is unbelievable that they sell the current 2013 vintage for only USD$28

Our evening concluded with an incredible meal by OuterAisleRestaurant.com, prepared by Chef Jimmy Sadegi, using local produce and pairing it with various Ironstone wines. I do have to note one interesting wine made with a grape called Symphony, which is a Californian crossing of Muscat of Alexandria and Grenache Gris, developed in 1948 (but not commercially released until 1982) by the late Harold Olmo, professor of viticulture at the University of California, Davis. Symphony is a white grape that is actually harvested later than many of the reds to get the aromatics just right.

2014 Obsession Symphony: Moderately perfumed nose with juicy peach flavors and for only USD$12 it is a uniquely fun white wine to have any day during the week

Celebrating Wine, Life and Inspiring Colorful People in New York City and Beyond!
View all posts by damewine →
This entry was posted in Dame Wine and tagged California, Ironstone Vineyards, Sierra Foothills AVA. Bookmark the permalink.