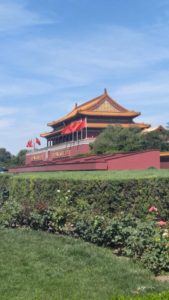 Entrance to the Forbidden City

Recently, my partner in crime and I traveled to Beijing, China for holiday (or as we say in the US, ‘for vacation’). You may have seen a couple of the over 500 pictures I placed on the internet. We are always looking to expand our minds and hearts with different experiences. And the biggest wine lesson that I walked away with is, in the quest to gain as much information and taste as much wine as possible, that I should always make time for those long conversations… not only with people in the wine business, but also locals. I was able to have some in-depth conversations with both trade and non-trade and I walked away having a deeper respect and understanding of the Chinese market.

It seems generalizations are a necessary evil. I cannot out right blame someone for making generalizations since I have used them myself. Whether it is a style of wine or wine consumers from a certain area of the world, it seems to be the most assured way to get people to walk away with any bit of information, as a long and thorough explanation always ends up being too much information to digest. But it becomes dangerous when we use quick sound bites that are more for the purpose of making ourselves look clever instead of passing on valuable information. I always have to remind myself to qualify a statement when talking about a particular market. Most of my experiences are seen through the lens of the New York City market; my trips to other places are relatively brief, and so it is always a good reminder that it is impossible to completely know another place unless one has lived there for several years.

China makes no bones about it not having the same long wine drinking culture as European countries. As an American, I appreciate many of the missteps a country can make when it is a neophyte to wine, as we were primarily a whiskey and beer drinking country not that long ago. But saying generalizations such as a “whole country does not have taste”, “can only appreciate brands” or “does not have the potential to become a well-respected wine making country” is simply unfair to make as dogma.

I think it is absurd to say any area of the world, let alone a large, vast and diverse country such as China, does not have taste. I have had the privilege of talking to people from various backgrounds in China, some in the wine business and some not, some who have lived and traveled the world and some who have never been beyond China’s borders. Whether I was tasting wine or tea, or eating food, there was always a discussion of the various subtle nuances of what we were drinking and eating, even to the point where my own senses were elevated. We are all limited by our own environment and need to expand our horizons.

The Great Wall of China

There has been a movement within the wine trade in Asia to use descriptors that correlate to the common flavors that a particular Asian country finds to be in the staple diet of their people. Young Chinese people in the wine trade seem to be well traveled, well educated and able to know the needs of their local markets better than foreigners who sometimes try to force their own terminology and culture onto a people, who not only have a rich culture of their own, but who may help to revolutionize the future of the wine world.

Does any country have the right to criticize another country for being attracted to brands?

Wine brands are important everywhere. The wine consuming public does not have the time to get a PhD in wine so they are dependent on those things they trust – it may be a salesperson at a store, a recommendation from a friend or most often a trusted brand. Names like Kendal Jackson and Gallo are trusted names within the American market. The majority of wine sales in the UK are through the large supermarket chains that mainly carry large brands since they require volume and consistency. French wine brand JP Chenet saw a significant increase in sales when they placed an image of their famously shaped bottle on their bag-in-box in Sweden.

And yes, there are the much covered, highly expensive fine wines that have been bought by Chinese consumers. But in the fine wine world, and I used to work for one of the top fine wine retailers in Manhattan, there is a market segment in many international cities around the world that are willing to pay large amounts of money for an assurance of “saving face”. I have met Americans who bought wines for large amounts of money because they did not want to embarrass themselves around wealthy friends and/or colleagues.

I understand, as being a middle class person myself, the frustration of certain wines that were once affordable are now price prohibitive – with the fortunate exception of being able to taste them for free as a wine writer. But to blame price increases on one country seems unfair. Some of my colleagues who work in the well-established London market say the need for fine wine “brands” to help one give the impression of being cultured is prevalent there as well.

China as a Wine Making Country

I cannot speak too much to this idea and it seems even the Chinese themselves are not 100% sure of the potential of China. Because the wine consumption in China has drastically increased in such a short amount of time practices such as using bulk wine from Australia, France and Chile to help blend with Chinese wine has created a perception that China is incapable of making quality wines.

But this is an issue for any up and coming wine making country. California was not always seen as a premium wine making area and through time, with a little luck that helped to bring investment and international acclaim to the state, it has become a world class wine making region. Before that time there was a prejudice of the area as being a place with a bunch of hicks who knew nothing about wine and were toiling simply to make subpar juice.

During one of my nights out with some very wine knowledgeable locals in the biz, I had the opportunity to taste a wine blind. I guess I should have guessed it was from China, but since these particular people I was having dinner with seemed to like European wines, I went a different route with my guessing. The wine was rich and ripe with various layers of earthy notes that suggested an Old World country that had a warm climate. The tannins were evident yet well integrated and so I thought it was a high quality Portuguese, non-fortified, red table wine that had moderate alcohol, beautiful fruit and contrasting textural qualities.

Did I overthink it? Yeah, I think so. Should I have just looked at the situation and said it was a Chinese Cabernet Sauvignon? Yep, you are right again.

It was a 2012 Zhen Ge Cabernet Sauvignon, and the first time I had a Chinese wine that was within the low to mid premium price range (188 RMB equivalent USD$28) as I had only experience with entry level and fine wine (Grace Vineyard). It was made with grapes that 100% came from China in the Ningxia province which has a continental climate ranging 80F (27C) to an annual average minimum of 7F (−14C). Cooler climate than I would have guessed.

But was it an unusually warm vintage? Who knows their Ningxia vintages?

Local Chinese wine experts do debate whether Ningxia is the best province for the government to place its hopes. Other provinces could be more promising such as the southwest province of Yunnan. But what Ningxia shows us is that quality wine can be made in China and perhaps, with further experimentation with other varieties and techniques in the vineyards and wineries, it could become a top region. Also, China is just starting to place a focus on making quality wine and so it is only the beginning

I think the ultimate lesson is that while we may have our generalizations, we have to also, at the same time, admit our limited knowledge and experience of areas outside of our residences. There are many things, even to its own highly educated wine experts, that are unknown about China. Maybe that is what scares us; we do not know what is going to happen.

Exit to the Forbidden City

Fear is everywhere these days as globalization starts to change the daily lives of many people around the world. There are those who want to fight it. Blame it for all our problems. Try to hold on to the past because we are afraid that there will be a power shift that will not be in our favor.

The world is changing. No one can stop that and either we move together with grace, acknowledging the strengths and weaknesses each of us possess, or we fight tooth and nail with a bitter heart and a closed mind as the world changes around us.

I am happy to move with grace together.