Partners in Life Come in All Forms

Posted on September 30, 2019 by damewine
ShareTweet

It was a hectic day a few weeks ago when I visited the wine producer Weingut Weegmüller, as the harvest started earlier than expected in their wine region of Pfalz, Germany, but one of the family owners Gabriele Weegmüller was still gracious enough to give a tour of the vineyards and winery with a tasting at the end. Despite these wines having been exported into the U.S. market for many years, there was one wine that was still not and that was their Cuvée 3 Schwestern (sisters in English) because the label was not as modern as the other ones. But this pretty label that depicted three young sisters represented the Weegmüller women; Gabriele handling the sales and exports while her sister Stefanie (Steffi) was the winemaker and another sister who passed away. Although the passing of their sister happened many years ago, it was too much for Gabriele to speak about it further and she asked that we move on to another topic.

It was deeply moving to see how much these sisters meant to each other and became evident with how Gabriele would beam with pride when talking about Steffi becoming, in 1984, the first German female vintner with sole responsibility in the cellar. Sometimes with family wineries it is not possible for siblings to work together, let alone run the operation as a team, but it seemingly was an asset with the Weegmüller sisters who were true partners in keeping the family business successful.

The Pfalz wine region is the one that many young, hardcore German wine drinkers are the most excited about as there have been a few rock star winemakers making thrilling dry wines as the climate is warmer and drier than many other regions. Also, it is known for making a significant amount of everyday wine but that is not so surprising as the area’s ease of achieving ripeness makes it possible to make quality wine at an affordable price.

Weingut Weegmüller was established in the middle of Pfalz, in the Haardt district, in 1685. The winery is currently the oldest in the area that has been continuously owned by the same family. Both Steffi and Gabriele have become great examples for other German women to take leadership positions in the German male-dominated wine industry and they have made sure to place other women in key positions at Weegmüller as well. Weegmüller is mainly a white wine estate with Steffi’s favorite varieties being Scheurebe, Gewürztraminer and Grüner Veltliner, as well as Riesling; Gabriele proudly stated, “Steffi is known as the Queen of Scheurebe” and Steffi is part of bringing an interest in the variety. Their Alte Reben trocken Rieslings are known for their intense minerality. 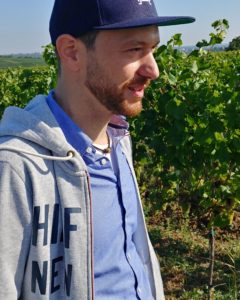 One of those up and coming rock stars is the shy yet thoughtful Sven Klundt who is the winemaker for his family winery Weingut Klundt. Klundt is located in the southern part of Pfalz and although it has been the northern area that has historically been the most well known because of a few iconic producers, there has been a shift to look at other areas such as the middle and southern sections to find other producers making high quality wines for a fraction of the price. Sven Klundt is one who is getting noticed, especially his last few vintages. In 2017 he was named one of the 25 “Winemaker Talents of the Year” in VINUM magazine. Sven may have a gentle personality but his top wines are not, especially his Kastanienbusch vineyard site, and they perform like Grosses Gewächs “great site” without breaking the bank but is not labeled as such since his winery is not part of the VDP invitation-only group. From his Extra Brut Traditional Sparkling Sekt to his “Grand Gru” Riesling vertical, it was an impressive lineup that showed that there is an exciting future for the southern area of the Pfalz.

After visiting Weegmüller and Klundt I honestly thought it was going to be disappointing to visit a coop in the north as such a visit doesn’t have the same personal impact as family wineries. But the wine coop of Wachtenburg Winzer was a wonderful visit as a sense of community was brought by the Managing Director, Albert Kallfelz; Albert talked about the grape growing families (members of the coop) like they were old friends and it was lovely to see many of their faces on the walls of the tasting room. The vineyards come from the Mittelhaardt which has been historically known as the best in Pfalz; remarkably, the area can receive around 2,000 hours of sunshine and Albert joked that it was a much better place to live than the Mosel wine region where he grew up. The wines were delicious and a real value as some of their entry level wines were only a few Euro and even with the added cost to import and distribute in the U.S. they would still be an incredible bargain.

When it comes to the best types of partnerships they are always the ones that last and that does not always mean in the literal sense. Some of the most important people in our lives – family, friends, spouses or mentors, leave a strong mark and these people never leave us. It doesn’t matter how we originally became connected as all that matters is that they were interwoven into the fabric of our spirit. But it can still be painful when times get tough and stressful and you wished that she was there to help you in that way she always did. It is something that these very different wineries all have in common as Sven Klundt has a great partnership with his family that allows him, at such a young age, to take the winemaking reins and the Wachtenburg Winzer brought together families with prized vineyards that formed a partnership of building a modern winery so they could make quality wine. And it is undoubtedly part of the story of the Weegmüller sisters who are all represented on that bottle of Cuvée 3 Schwestern – they started together and they are still together, at least in spirit.

Tastings at Wineries on September 11th, 2019

Most of the wines below are dry wines and even those that had a small amount of residual sugar tasted dry and hence why there is no reference to the sweetness level of the wines.

-2017 Klundt, Pinot Extra Brut Sparkling Sekt: Mainly Pinot Noir with some Pinot Blanc made in traditional style with 16 months on the lees; riddling by hand. Fine bubbles with hints of cherry blossom and white stone fruit.

-2016 Klundt, Pinot Noir “Obsession”: Obsession (name of Sven’s small town) notes that this is a village wine as opposed to some of the single vineyard bottlings that Sven makes. Fresh thyme and cinnamon with juicy black cherry fruit and silky tannins.

-2016 Klundt, “Kastanienbusch” Riesling: Sven gave us three different vintages of his single vineyard Riesling “Kastanienbusch” that is considered a top site. The soil is called Rotliegend and it is thought to be created by the collapse of the Rhine rift valley 40 million years ago. Nectarine with intense minerality and smoke that had a fierce energy and a breathtaking sense of purity of fruit on the finish.

-2017 Klundt, “Kastanienbusch” Riesling: Creamier than 2016 with more floral notes and a touch of sweet fruit on the mid palate that was round and crisp on the finish.

-2018 Weegmüller, Scheurebe: A crossing of Silvaner and Riesling – it is one of Germany’s most successful crossings. Stone fruit and wild flowers with a linear body.

-2017 Weegmüller, Pegasus Rieslaner Spätlese: Rieslaner is a crossing of the Silvaner and Riesling grapes. Apricot jam with hints of lemon rind with bright acidity.

-2018 Wachtenburg Winzer, Blanc de Noir: Made from Pinot Noir with a light body with pretty red fruit and gentle bubbles.

-2018 Wachtenburg Winzer, Riesling “Wachenheimer Fuchsmantel”: This comes from Riesling that was grown on sandy clay soil with a layer of limestone; it had a rich weight with dried pineapple and stony notes.

-2018 Wachtenburg Winzer, Riesling “Wachenheimer Gerümpel”: Riesling grown on loamy, sandy soil with basalt deposits and a gentle southern slope which gives full exposure to the sun. Candied orange rind with complex notes of cumin and a marked minerality at the core with a hint of lemon verbena on the finish.