The Papers that Hold the Pride of a People 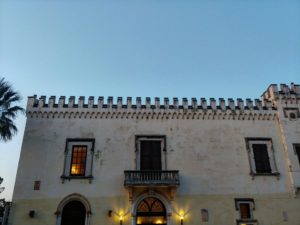 As the glow of the sunset across the vines lit my inner soul on fire, I could hear calls to dinner that came from inside the centuries-old, beige, Southern Italian castle. At first I didn’t want to acknowledge the need to go inside as the golden sky defied it, and then, as if by design, the sun seemed to instantly disappear as if to nudge me inside… before I knew it I was frozen at the door by the shear beauty and beckoning mysteries that were tucked away in the stone-vaulted room. There seemed to be an infinite amount of delicate wine glasses on the tables that shimmered under the various pools of light. 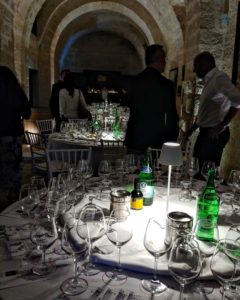 Finally, I forced myself to walk inside as I felt the anticipation of the crowd behind me and I tried to quickly survey my surroundings… stone carvings in the wall, a distinguished looking book here and there, side hallways that were illuminated by the warmth of lights that foretold that there was more to come. But then I saw a series of old papers that seemed to be handwritten notes of some kind that were framed and hung side by side along the wall. My chair was too far away from the papers to decipher any notion of the Italian script but close enough that they were always in my line of sight… through time they built my curiosity as it seemed odd to have hand-written papers with scratch-outs in such a grand dining room.

I was in Puglia (Apulia), invited by the Radici del Sud association to be part of their 2019 exhibition that brings buyers and journalists from around the world to taste, judge and explore the wines of Puglia (Apulia), Basilicata, Campania, Calabria and Sicily. One of our evenings was spent visiting the Agrinatura estate between the Andria and Castel del Monte areas in Puglia that produces the wines of Giancarlo Ceci. 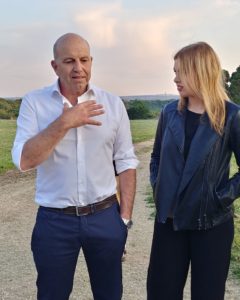 The owner, Giancarlo Ceci, met us outside to talk about the existence of their ancient estate that has existed for at least 200 years as well as having eight generations of farmers in the family. Giancarlo said he has lived on the estate his whole life and only briefly left when he went to University for agriculture; when he came back in 1988 he was convinced that organic was the only way to farm.  Giancarlo said that “my father and everyone was against the idea” but he continued pushing until all their vineyards and farming practices were 100% organic, starting with his first steps 31 years ago. He said that from that time, he had only one philosophy – “balance.” Through time Giancarlo became a believer in biodynamics as he feels no other system “manages the soil as completely” as it does. 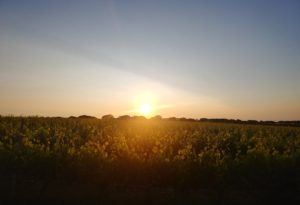 Later that night, inside the vaulted dining room before dinner commenced, Giancarlo gave us a vertical of his Nero di Troia wine Felice Ceci “A Mio Padre” (meaning “To My Father”) and we were given the different profiles of the various vintages as well as an introduction to the Nero di Troia variety and its history in the area. The red grape Nero di Troia is technically listed in the Italian National Registry as Uva di Troia but as there has been a recent focus on it in the region of Puglia, many producers thought it better to have a more approachable name. It was a favorite for blends and actually was exported to France and other parts of Italy to bring color, aromatics and a sense of grace to the wines. According to Giancarlo, despite not being an easy variety to grow due to its “fragile” quality making it susceptible to parasites and mildew, it was kept by farmers because it was highly prized for the attributes it added to a blend and so money could be made on exporting it. It was uncommon for grapes in Southern Italy over 50 years ago to be grown for anything else besides as a daily supplement to give calories but thankfully it survived, and over the past 20 years there has been a focus on making single variety Nero di Troia wines as the grape deserves to be known on its own merits. 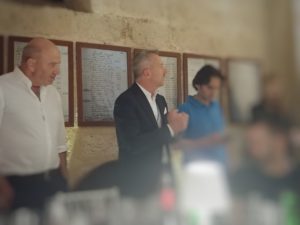 Then, at one point, Giancarlo gestures to those papers on the walls, the ones that I kept eyeing, wondering, thinking about during the whole time, and he said that they were invoices. As he talked about the demand of Nero di Troia in other wine regions, he pointed to the framed papers on the wall “here are all the documents of the invoices from the 1800s that we were writing for our wine importers in France as well as a company in Italy.” It was a moment that took my breath away as I was not expecting it; out of everything in that room, these old, stained papers with scratches and scribbles meant the most to him.

It must have been a good financial situation for grape growers in Puglia, especially during the times when people were dirt poor, to be able to have a steady income but I’m sure many of these growers felt like a part of them died a little bit every time their indigenous grape from their ancestor’s land was shipped off; that distinctive grace and complexity was awarded to another grape, another place, another people. That type of pride in the fact that the region has reclaimed one of their cherished grapes for the world to see means more than anything that money can buy. And so, that is why I understood that those were the most valuable items in that grandiose room; they were symbolic of those people who once felt like they had to keep their heads low who can now finally lift them up high.

The designated wine area, Castel del Monte DOC & DOCG, is known for its calcareous soil with limestone. Giancarlo said that this is a critical component as it slows down the maturation of the Nero di Troia variety so it doesn’t get too much body or sugar and keeps its “grace” developing phenolic maturity and aromatic complexity.

Dry seasons, it was pretty much dry throughout the both seasons which caused a lot of stress during budding that remained during the ripening of the grape and for this reason the grapes developed a lot of phenolics. There is a lot of power in 2006 and also in 2008 which are not the same but pretty similar.

More rain than 2006 and 2008 during July and August and so the grapes had a longer hang time which helped to develop more complex aromas.

2006 Giancarlo Ceci, Parco Grande Rosso, Castel del Monte DOC: 70% Uva di Troia, 10% Aglianico and 20% Cabernet Sauvignon. There wasn’t a 2006 of “A Mio Padre” because this is the year Giancarlo Ceci’s father died so he didn’t make a 2006 vintage of it. Dusty earth with fresh blackberries with firm tannins that had a hint of spice on the finish.