When You Forget About the Human Aspect 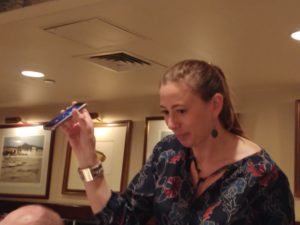 Jean-Christophe Mau’s voice was filled with shock and sadness, yet determination to find a way to survive. It was during my lunch with him back in May, a lunch that included having him talk through a cell phone, on speaker, raised up above our table at a famous seafood place in Manhattan, New York City, called Docks. Just a few days earlier, one of the worst hailstorms in Bordeaux’s recent history came down fiercely, as only Mother Nature can do, with golf ball sized ice that decimated everything in their path. The lucky, and the unlucky, were decided within a matter of 15 minutes and when it was all over, Jean-Christophe, owner and manager of Château Brown, said that 50% to 70% of his vines were damaged.

As one can imagine, in that instance, Jean-Christophe had the weight of the world on his shoulders, and despite all of the New York City wine buyers and writers at that table understanding the gravity of the situation when we heard the news, he was still insistent on calling us and apologized profusely… he said that there were few things that could keep him from his NYC visit and unfortunately one of those unfathomable things happened. 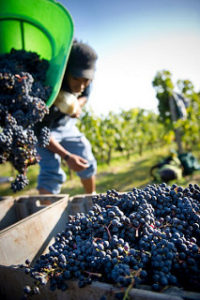 I have been around wine, talking and learning about it seriously, for almost 25 years… starting when I was a naïve 18 year old fresh “off the boat”, or my case a cheap plane flight, in NYC surrounded by people who knew a lot more than myself. Through the years I have learned a lot, as well as un-learned some things that have led me astray, as facts not only have a way of evolving and altering, but also, many of these facts were lacking a perspective in humanity.

Over the years, my frustrations at finding the same sort of prejudices and unfair generalizations that plague societies seep into wine as well made me get to the point where I no longer enjoyed wine… either I was going to leave it or I was going to start bringing the humanity back to it. I have to admit that I, shamefully, have said many ignorant things about wine in the past while trying to impress those who were more well-traveled, educated, and sophisticated than I was. Something deep down inside me, though, knew that it was not right to make similar sweeping statements about people – once we start to pick and chose who gets a fair shake at humanity, such as those who succeed get the negative sensational slant and those that are the downtrodden get an positive in-depth character analysis, we become no better than those strangers who throw unkind, biased words our way. In turn, we become part of the problem of deciding to take the humanity out of the discussion when it fits our purpose. 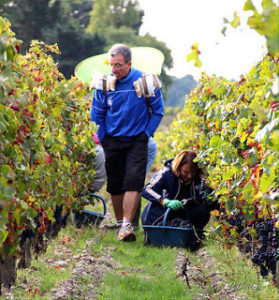 Bordeaux has been the latest casualty of the unfair generalities in the world of wine. It is a warm, inviting place filled with many quality wine producers trying to create the best wine within a fair price point, but the flood of articles, year in year out, focusing on 1% of the most expensive wines – whether to praise them or demonize them – get placed into a group message about a pretentious Bordeaux. I understand that writing quality fair and balanced work is becoming an endangered species: unless there is an angle to it that is click bait, no one is going to see it; publications are facing the dire choice between writing well-balanced articles and potentially going out of business and writing something a bit more controversial and surviving – hoping that readers will be able to keep it in perspective on their own. So Bordeaux wines have become one of those easy, controversial tropics – accusations about their greed and lack of excitement are over-exaggerated while the producers making soulful wines at an attainable price have to spend too much time trying to defend themselves in export markets.

Château Brown is one of those wine producers… located in the heart of Bordeaux white wine country, Pessac-Léognan in Graves. The name may seem odd for a French wine producer but “Brown” pays respect to the Scottish wine trader, John Lewis Brown, who settled in Bordeaux shortly after the Revolution, in 1795, and bought a wine estate that was dated to have vines there since the 12th century. The Mau family has owned Château Brown since 2004, and despite not being part of the Brown lineage, they share the founder’s passion for placing a great amount of resources, time and energy into their vineyards as well as the winery. Their top white Château Brown sells out almost every year because of their fair pricing in combination with the reputation of the area; their often times overlooked reds and second wines have a beautiful finesse, generosity of fruit with good precision which illustrates how these wines have come a long way in their quality while staying true to the heartbeat of this château – managing vines that ultimately create elegant wines. In a 2013 interview with The Drinks Business, Jean-Christophe Mau said his most treasured possession was, “the land of Château Brown” which hits home the fact that not only was there a physical devastation caused by that ferocious hail storm but also emotional trauma.

Speaking the Language of the Heart

Through time, I decided that I would speak my wine truth as I spoke my truth in life, not tolerating any form of character assassinations on a person, or group of people, based on their nationality, or any other exterior factor, that was influenced by the past or present gossip circulating. If I was going to be a person that truly fought the good fight in the world, I needed to start holding myself accountable in the wine world. And so I started to write stories that were based on the humanity of the people involved, mainly to remind myself so I didn’t lose hope. I thought no one would be interested, and happily I was wrong… many of us are stepping up to demand a more balanced story – to me that is where being a knowledgeable wine lover truly lies… in the constant reminder that it is impossible to know everything and you don’t need to speak someone’s language to understand them… you just need to remember that he/she is just as human as you.

***2nd, 3rd and 4th photo are all credit to Château Brown

–2015 La Pommeraie de Brown Blanc, Pessac-Léognan AOC, Graves, Bordeaux, France: 80% Sémillon and 20% Sauvignon Blanc. La Pommeraie de Brown Blanc is the second wine of  Château Brown and comes from the same vineyard yet are grapes that are more ideal for a fruitier, lighter style of a Pessac-Léognan white wine. Notes of lemon confit and nectarine with hints of spice and hazelnut make this wine delicious now although the nice backbone of acidity indicates that it could evolve nicely with more time.

–2015 Château Brown Blanc, La Pommeraie de Brown Blanc, Pessac-Léognan AOC, Graves, Bordeaux, France: 65% Sauvignon Blanc and 35% Sémillon. I must admit that, at first, I thought I incorrectly heard the blend… the second wine has majority Sémillon and the first wine has a majority of Sauvignon Blanc. I may be incorrect, but during the time when my life mainly focused on selling Bordeaux wines in the NYC area, I was always told that, traditionally, top white Bordeaux was meant to be majority Sémillon – but Château Brown quickly sells out their top wine year after year so they are doing something right and the wine is damn good – also, Sauvignon Blanc brings that high acidity that makes wine built for longevity. Lovely notes of honeysuckle and white peach skin with hints of vanilla bean and marked acidity that gives a mouthwatering finish. 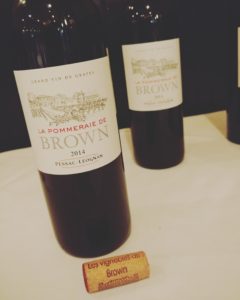 –2014 La Pommeraie de Brown Rouge, Pessac-Léognan AOC, Graves, Bordeaux, France: 58% Cabernet Sauvignon and 42% Merlot. This is the second wine to Château Brown’s red and although it is the whites that are legendary in the Pessac-Léognan area, in Graves, for those who like reds with more finesse and less extraction there are some real deals in this area of Bordeaux. A bright, moderate bodied wine with notes of red cherry and allspice that had gentle tannins that gave shape without rigidity.

–2015 Château Brown Rouge, Pessac-Léognan AOC, Graves, Bordeaux, France: Blend of 55% Cabernet Sauvignon, 43% Merlot and 2%  Petit Verdot. But the complexity level was really kicked up a notch with this first selection… intoxicating bouquet of licorice, blueberry tart and tapenade with more evident tannins that were structured like fine lace. 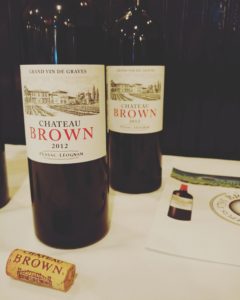 –2012 Château Brown Rouge, Pessac-Léognan AOC, Graves, Bordeaux, France: Blend of 50% Cabernet Sauvignon, 46% Merlot and 4% Petit Verdot. It may sound odd because this was not a top vintage but I was really loving this wine… perhaps that bottle just happened to be singing, or it was the pairing with the octopus that accompanied my Surf and Turf dish, or maybe, just maybe, its pure finesse and harmonious overall quality took me off-guard on a vintage that was not that popular. This wine seemed to have it all with a quiet elegance; richness of black berried fruit, complexity of smoldering earth, fine tannins that were completely integrated with bright acidity that lifted it on the long, expressive finish. 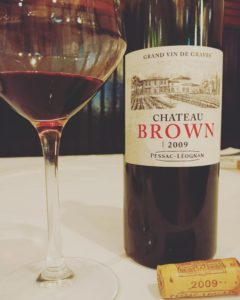 –2009 Château Brown Rouge, Pessac-Léognan AOC, Graves, Bordeaux, France: 56% Merlot, 40% Cabernet Sauvignon and 4% Petit Verdot. Of course I was not shocked at all with this beauty that had velvety tannins, dusty earth, sweet tobacco leaf with a smoky finish that stayed in my head for several minutes.