Sustainability: Meeting the Needs of the People

Posted on March 13, 2018 by damewine
ShareTweet 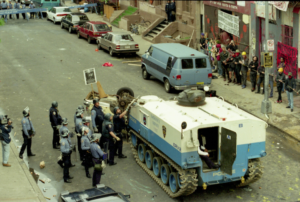 Faint memories of small police tanks, officers in riot gear and helicopters in the sky circling my neighborhood constantly just seem like a gritty dream that was inspired by an urban apocalyptic movie… but it was real. My first few years in NYC from the age of 18 to 21 years old in the early 1990s in Alphabet City in the East Village were filled with images of squatters being kicked out of abandoned buildings, corporations buying up blocks of tenement apartments and storefronts; rents then went sky high for those that did not have rent stabilization to protect them, and a militant feeling that would transform my old neighborhood into a safer, more expensive area for better in some ways, and considering the latter, worse in other ways. One name would bring me back to those memories – César Chávez.

César Chávez was a man that was often quoted and worshiped as an iconic folk saint back in those days in Alphabet City. He was best known as a Latino American civil rights activist that started an important grass roots movement for the improvement of working conditions for American laborers, especially migrate workers. His name was evoked by Janet Trefethen and her son Lorenzo last month, during their Trefethen Family Vineyards vertical tasting.

Janet Trefethen said that to her knowledge, Trefethen is the only winery in the United States that is over 25 years old (the Trefethen family has owned their vineyards for 50 years) that has grown every single grape that has gone into every single bottle. Also, the family: Janet, her husband John, and her son Lorenzo and daughter Hailey are owners that live nearby and get their “hands dirty” in the 600 acres of vineyard land that was originally purchased by John’s parents, Gene and Catherine in 1968 (there were fewer than 20 wineries in Napa Valley at the time). John’s wine loving parents intended to sell the grapes but John had other ideas, and once he married Janet, who had been raised on a Northern California rice farm, they became a dynamic duo in taking over the land by revamping the vineyards and building a winery. Janet said they bossed John’s parents around when it came to what they needed to do for quality wine and now their children boss them around taking the respect for land and expression of each plot of land to another level. 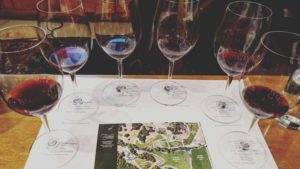 Before starting to taste the vertical of wines that ranged from 1977 to 2016 (tasting notes below), Janet and Lorenzo both wanted to emphasize how important sustainability was to their family. They use natural pest control (barn owl and bat boxes), compost the leftover grape skins, seeds and stems, recycled winery wastewater to irrigate vineyards and were influenced by the book One-Straw Revolution: An Introduction to Natural Farming (originally published in 1975 and known as the “Zen and the Art of Farming”). But one part of their sustainability is the most important to them: employing their vineyard workers year-round, providing them with living wages and comprehensive benefits (healthcare, 401K plan, vacation time, etc.). Janet said they were able to benefit from her father-in-law being the CEO of Kaiser Industries and were able to place all of their employees on the Kaiser Health Plan.

This is when the name César Chávez came up in their discussion. In the late 1960s, César Chávez led a boycott of table and wine grapes in America because of the poor pay and conditions for many of the workers in the fields. This created signs that were placed in stores, especially in NYC, to “Boycott Grapes” and drew great criticism from Robert Kennedy that was focused towards California wineries. Janet Trefethen said although they paid and treated their people well from the beginning, the protesters marched on them using trucks filled with baseball bats. Although it was an extremely painful time for the Trefethen family and their extended family of workers, she said that she applauded the attention the boycott gave to exploited migrant workers but she wished that they had not picked on them since they were, in essence, fighting the good fight with them.

And being a true pioneering woman who supports other women, Janet Trefethen pointed out that Dolores Huerta co-founded the National Farm Workers Association with César Chávez and was just as vital a part of that revolution but her name is not as widely known as the charismatic César.

When Revolutions Lose Sight of Individual Businesses and People

It is interesting to think back during my time in the East Village in the 1990s and although it was way past the time of the “Boycott Grapes” movement, many of my neighbors were still wearing César Chávez t-shirts. And considering that he died the same year I came to NYC, in 1993, there were tons of tribute murals that were placed on buildings and sidewalks. His image was always around to remind us that the fight for true equality was a heroic one. At the time, I was young and naïve and so I did not realize the complications of life… many things are not simply black and white. 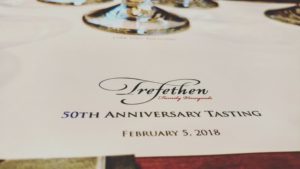 Lorenzo went on to talk about their employees, some involving multi-generational families such as the Baldini family. Tony Baldini was their first employee, his son Steve helped his father run the vineyards, and today, Tony’s other son Michael works in their tasting room. Janet chimed in, “There has been a Baldini on the payroll from day one.” When another writer in the room asked what they did with their full-time employees during the slow season, Lorenzo said that there was a break in December, which everyone needed after working 6 to 7 day weeks during and after harvest, and there was always winter work to do from rebuilding the hillside to fixing tractors. And a couple of Trefethen employees have their own farms, and so the Trefethen family works out a schedule for these couple of employees to be given time off when they need it. One of them owns an agave farm in Tequila, Mexico, and Lorenzo said that if one thinks wine vineyard owners were cash poor then it is even worse for agave farmers who can only harvest every 7 years.

The older I get and the more people I meet from various walks of life, I find that there are many exceptions on many sides when it comes to generalizations, almost so much so that generalizations no longer work. When we are fighting for the rights of those being marginalized, we can get carried away by emotions and well-intended words and actions gone wrong – sweeping those people who are implementing the positive changes that we are fighting for under the same dirty rug as those who are exploiting people, which is just fighting unjust actions with more unjust actions. Don’t get me wrong, I understand that these revolutions were important for real change and César Chávez and Dolores Huerta created change that improved conditions for over 50,000 field workers in California and Florida. But after each fight, when the smoke clears, we need to reexamine the facts of the multitude of businesses in each sector.

If we are battling for an open minded world then there needs to be a deeper understanding on both sides and a more measured approached when it comes to throwing around inflammatory accusations to whole industries or regions as there may be some very good people caught in the crossfire. I am very happy that the Trefethen family was able to survive those times and continued their philosophy that one cannot have a sustainability program if people don’t come first – a great reminder that one cannot lead a true revolution for people if all of them are not considered.

***Top Photo captures scene of one of the East Village, NYC, squatter evictions in 1996 Photo Credit: John Penley via the NYU Tamiment Library

100% of all grapes are sourced from Trefethen’s vineyards in Oak Knoll District AVA in Napa Valley.

Because Oak Knoll District AVA is in the lower part of Napa Valley, they get the same fog that San Francisco gets, creating a cooler climate. Their wines are known for the incredible vitality and bright acidity that makes them age-worthy as proven by this vertical. 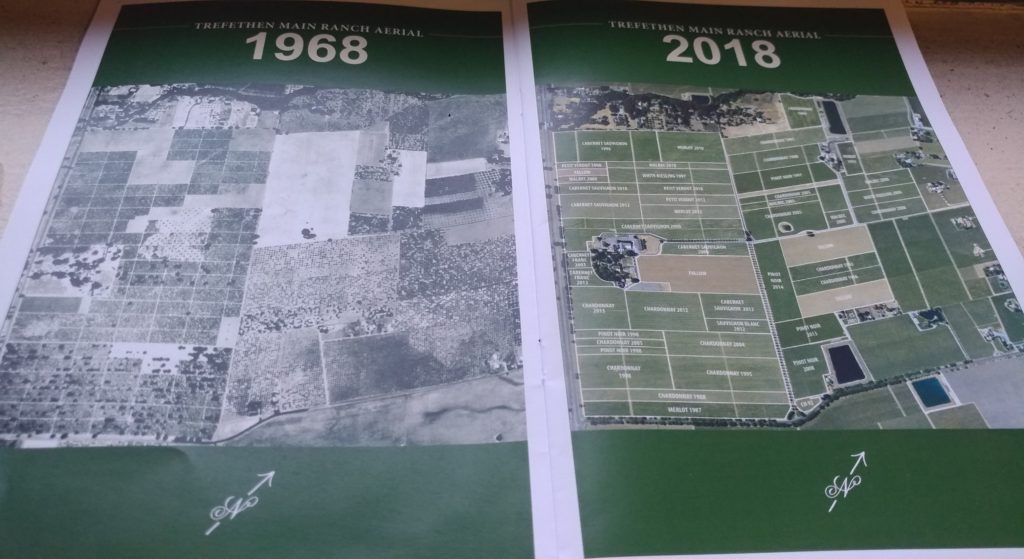 The photo of these two maps of Main Ranch, 1968 on the left and 2018 on the right, shows the major progress that Trefethen has made through the years. Their Director of Viticulture, Jon Ruel, has segmented the vineyard into five dozen different ‘gardens’ delineated by variety, soil type, trellising system and irrigation regimen. As a result, Trefethen now farms 63 distinct vineyard blocks, encompassing nine different grape varieties (Chardonnay, Cabernet Sauvignon, Merlot, Riesling, Pinot Noir, Cabernet Franc, Malbec, Petit Verdot, and Viognier), 10 different types of rootstock, and 49 different clones (genetic variations of a grape variety), including 13 of Chardonnay and 10 of Cabernet Sauvignon. 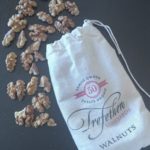 Many past vineyard owners in Napa Valley would plant walnut trees where a bunch of vines died, not having the knowledge about viticulture they have today, and so Trefethen has kept some of these walnut trees and shared a bag with each of us. 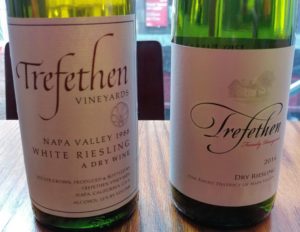 –2016 Dry Riesling (tasted before the seminar began): Trefethen has been making Riesling since 1974 and although their cooler area in the Oak Knoll District AVA in Napa Valley retains the bright acidity, they still get enough ripeness to make it a dry style. The 2016 had zingy notes of lemon peel balanced with richer notes of pear drop that finished with chalky minerality.

–1988 Dry Riesling: This was the first wine of the seminar tasting. Janet Trefethen and her son Lorenzo wanted to show us how well their Riesling wines age with the 1988 which had more flinty minerality, white flowers and honey covered apple slice notes. 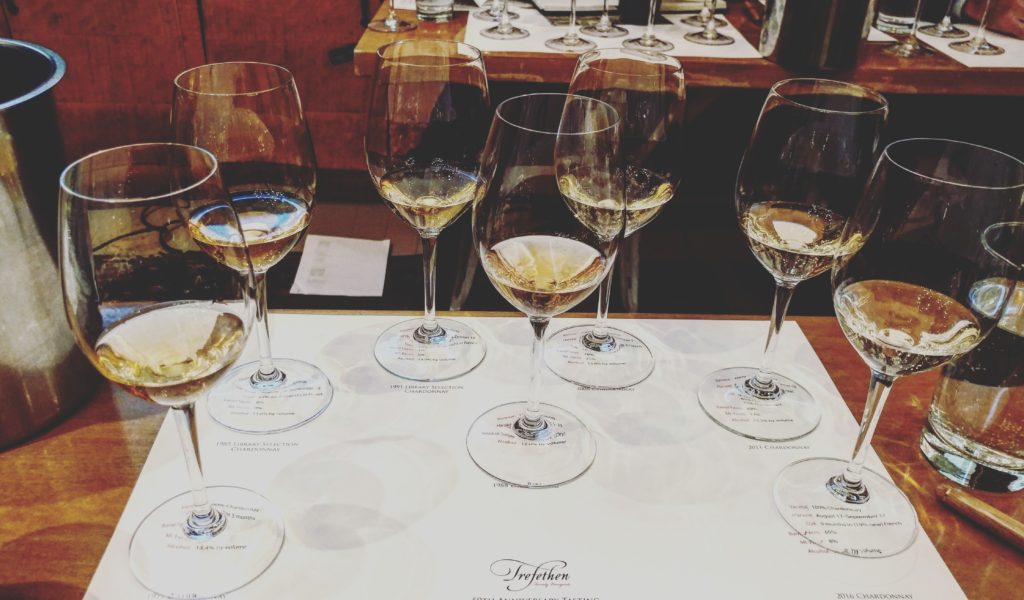 Trefethen has always gone light on the MLF and new oak treatment creating Chardonnay wines that are mainly vessels for expressing the vineyards.

–1977 Chardonnay: Gold color with hints of caramel, wet stones and a touch of white pepper on the finish that offers lots of vitality and energy along the palate.

–1985 Chardonnay (Library Selection): More golden in color than the 1977 with rich flavors and body that gave lush sultanas and apple pie that lifts on the finish with cinnamon spice. 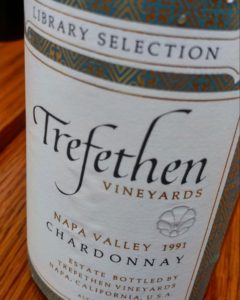 –1991 Chardonnay (Library Selection): Exotically enticing with mango and pineapple with a quince-y kick that had an energetic, long finish. 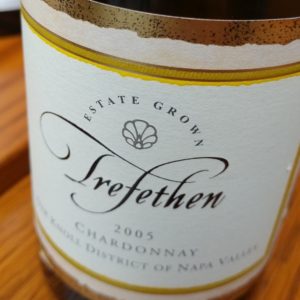 –2005 Chardonnay: Citrus tang with pretty orange blossoms on a lean body that evolved with dried flowers as time went on.

–2011 Chardonnay: Grapefruit with lime zest and marked acidity that had an edgy tension. 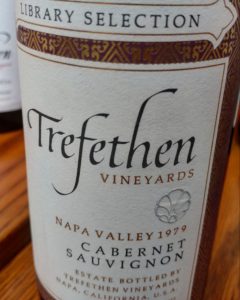 –1979 Cabernet Sauvignon (Library Selection): Fresh autumn leaves, dried thyme, violets with still a sense of fresh black fruit that was all wrapped up with fine tannins.

–1986 Cabernet Sauvignon: BBQ, grilled vegetables and black currant jam that had a broad body with a volcanic ash finish. 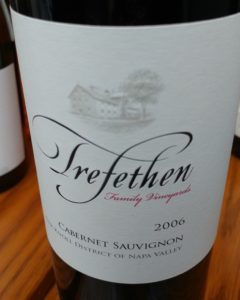 –2006 Cabernet Sauvignon: Bright red cherries give this wine an immediate freshness and on the nose it was singing with baking spice and intense minerality. Although full-bodied and loaded with fruit, there was a graceful quality that was created by the aromatically pristine fruit. 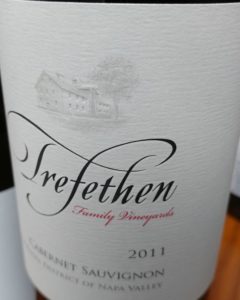 –2011 Cabernet Sauvignon: This wine was like a ballet dancer that was delicate in its refined delivery of fresh plum and black currant fruit yet had an inner strength that drove throughout the wine that finished with incredible precision.

–2015 Cabernet Sauvignon (Released on 50th Anniversary): A weightier body and a multidimensional wine that had seductive cassis fruit with underlying notes of graphite and asphalt. The seamless integration of tannin and oak plus the added brilliance of marked acidity makes this wine a stunner.