Sharing a Song in Our Heart & Wine in Our Glass

Posted on May 4, 2017 by damewine
ShareTweet 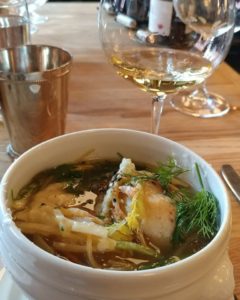 On a cold, rainy day, I found myself eating upscale comfort food at The Dutch in the trendy area of Soho, Manhattan, while drinking wines from Napa Valley and Anderson Valley… just a typical day in the world of wine. But although I have been connected with this world for over 12 years, I still cannot help but have moments of thinking “How the hell did I end up here?” On this particular day, I traced my journey with Remi Cohen, the Vice President and General Manager of Lede Family Wines, and she reciprocated with an interesting early twist to her journey.

Although Remi ended up in Napa, she originates from the East Coast, born and raised in East Brunswick, New Jersey. She was planning to become a doctor and was all set to go to medical school, but right before she enlisted in a summer internship to work in a hospital, she decided to spend her summer interning at a fruit farm. During her internship she learned that one could get a master’s degree in making wine and she ended up going to one of the top programs in the world at UC Davis. I loved how her eyes lit up as she said, “Who knew you could get a graduate degree in wine?!?” Since then she has never looked back and has covered every aspect of the wine trade, from the vineyard, winery, bottle to sales around the world… she ended up getting an MBA as well. But like so many of the top wine people, she has warmth and an ability to immediately connect and share.

Our conversation extended to Cliff Lede (pronounced lay-dee) the owner of Lede Family Wines… a man who grew up in his family’s construction business in Canada and fell in love with Napa Valley in the 1990s. His wines are interwoven with the very essence of his heart, naming certain plots of his Napa vineyards after his favorite rock songs such as the Grateful Dead’s “Scarlet Begonias” and Cream’s “Sunshine of Your Love”; he even named his new set of wines, that are made from his purchase of vineyards in the cooler climate Anderson Valley, FEL after his mother – Florence Elsie Lede.

Cliff’s adventure as a wine owner began in 2002 when he purchased 60 acres (24 hectares) in the infamous Stags Leap District in Napa Valley and founded Cliff Lede Vineyards. He is a man who seems to be always inspired by the land, illustrated by naming one vineyard “Poetry” because it yields grapes that produce a wine that is the epitome of finesse and purity due to the stressful conditions of the site, reaching one of the highest elevations in Stags Leap District.

On the outside, Napa and New York City couldn’t be more different from each other; New York is gritty and loud while Napa is picturesque and serene; but there is the interesting connection: people from the around the world come to live in both places and there is a communal feeling of people sharing their stories. I’m not 100% sure of the exact moment that I was hooked by the desire to be a part of the wine world, but it seemed to always come in and out of my life, and each time I found myself tasting wines with people from around the world, I felt less alone and that the wine, food and even my surroundings seemed so much better due to the conversations. It is the sharing that has hooked most of us in… it is not just Remi’s bottle of wine for her to drink, or my story to keep to myself, or even Cliff Lede’s vineyards for him to only view – it is for the enjoyment of anyone who feels a song in their heart when they drink a lovely wine among good people.

–2016 Cliff Lede, Sauvignon Blanc, Napa Valley: Cliff Lede Napa Sauvignon Blanc is already known as a top wine in the category and proved it with delicious fruit and an overall precision. 82% Sauvignon Blanc, 14% Sémillon, 3% Sauvignon Vert (Muscadelle) and 1% Muscat Canelli… I wonder if it is the only US white Bordeaux blend that has all three varieties (Sauvignon Blanc, Sémillon & Muscadelle)… honeysuckle, gingerbread and lilac with creamy yet bright, juicy stone fruit flavors on the palate.

Also, a side note about the Sauvignon Vert (Muscadelle): European producers will say it is either another old clone of Sauvignon Blanc (such as in France also called Sauvignonasse) or in Friuli they say it is called Friulano ….but Sauvignon Vert in California is Muscadelle (it even states it in the current Oxford). The vineyard that has it was originally planted in the 1940s. I just wanted to make sure this didn’t cause any confusion with people who are used to the European Sauvignon Vert.

–2015 FEL, Chardonnay, Anderson Valley: No MLF or new oak and so this wine is lively with lemon confit and white peach flavors – still good fleshiness on the body and beautiful, pure grapefruit finish. 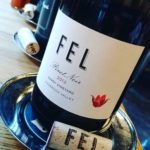 –2012 FEL, Pinot Noir, Savoy Vineyard, Anderson Valley: The Savoy Vineyard is recognized as one of the benchmark vineyards in Anderson Valley for Pinot Noir and Chardonnay. It was nice to taste one with some age and it was singing! A velvety texture with burst of ripe strawberries and cassis that had hints of forest floor and thyme – complex and refined. 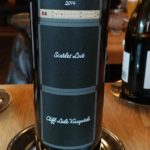 –2014 Cliff Lede, Scarlet Love, Stags Leap District, Napa Valley: 94% Cabernet Sauvignon, 3% Merlot, 2% Cabernet Franc and 1% Petit Verdot. The Scarlet Love is one of their superstar blends that include two special plots: Grateful Dead’s “Scarlet Begonias” in their Twin Peaks vineyard and from Cream’s “Sunshine of Your Love” in their Poetry vineyard. This wine is a knockout with a lush, concentrated body that has an explosion of cream de cassis and lavender, and has an underlining tapenade note that opens even further on the finish with visceral pleasing aromas of truffles and fresh leather. A profoundly full-bodied wine that had invitingly manicured tannins across the long, flavorful finish. Drink now or cellar for up to the next 20 years. 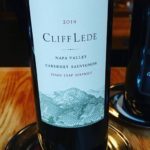 –2014 Cliff Lede, Cabernet Sauvignon, Stags Leap District, Napa Valley: 80% Cabernet Sauvignon, 9% Petit Verdot, 5% Cabernet Franc, 4% Malbec and 2% Merlot. This wine is composed of small lots from their best blocks, representing a diverse range of carefully selected clones and rootstocks. An intoxicating nose of lilacs and exotic spice, with intense gravelly minerality that is enhanced by a firm structured body with a good amount of acidity that gives it a sense of graceful purpose with an outstanding precise length. Drink now or keep for the next 15 years.