It’s All Part of the Story

Posted on March 19, 2017 by damewine
ShareTweet 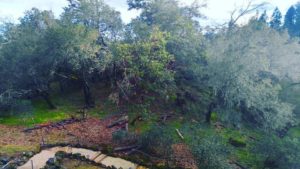 I stared down at the gaping holes between the big, jagged, moss-covered rocks, envisioning myself twisting an ankle or worse, as I jumped precariously from broken bedrock to bedrock. Before I had a chance to think that it couldn’t get any more treacherous, I saw a soaking wet, fallen tree blocking our way – my other ‘fellows’ seemingly leapt across it as if they were graceful gazelles – but my legs froze, paralyzed by intense fear. This city girl is used to dodging crack addicts, pickpockets and the constant pushing and shoving that come with the hustle and bustle of New York City, but I am not used to going off the trail in the forest. So, I took a deep breath and got my motorcycle-style city boots over that disintegrating log with only a few skids, slides and a couple touch downs with my hand. As I looked back at my personal achievement of roughing it in the woods, Jim Gordon, Editor of Wines & Vines, observed that we were surrounded by poison oak, which made sense since it had been pouring rain for the past couple days in Napa Valley. Once finally back in my room, I followed his instructions about washing my hands, turning my clothes inside out and separating them, and making sure I didn’t touch my face for a couple of days.

The Symposium for Professional Wine Writers at Meadowood Napa Valley 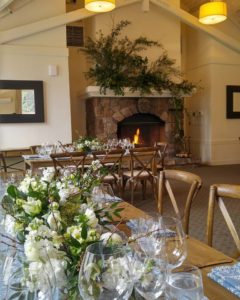 All of this excitement happened at the luxurious Meadowood resort that provides an amazing amount of privacy to each room (each “room” is actually a little house) on their massive property, with charming trails surrounded by acres and acres of woodland. I was fortunate to receive a fellowship to The Symposium for Professional Wine Writers to not only benefit from the magical surroundings and great professional advice with regards to my writing, but learn from my fellow ‘fellows’ as well.

Jim Gordon, in addition to being a master of spotting poison oak, has had a long lived career as an editor and reporter and he was the executive director of this Symposium from 2008-2015. Although Jim decided to take a step back from organizing this extraordinary event this year, he was still a part of panels and made himself available for counsel.

On the day preceding our jaunt in the timberland, Jim gave an incredibly moving speech prior to a panel discussion regarding ethics in journalism/writing. His words addressed those heroes who are so driven by the truth and finding the unknown side of a story that they risk their lives. As an example, he talked of a colleague who his wife knew personally, who was killed by terrorists in the process of meeting with them for an interview. Even though I do not have it in me to risk my life like those top investigative journalists who help to shine a light on human stories in every pocket of the world, I am obsessed with listening to people’s inner truth – the basis of what motivates and moves them.

The Culinary Institute of America at Greystone

The day following Jim’s heartfelt homage of those reporting champions that shape our world for the better, we attended a panel, at The Culinary Institute of America (CIA) at Greystone in Napa Valley, of some of those champions in the wine world who have shaped communication for the better. The session was called “Building a Career” and instead of it being about a list of accomplishments that one would place on their resume, it was a very frank, open discussion about the various journeys that take us to a different place than we once anticipated.

Madeline Puckette, co-founder of Wine Folly, talked about her former intense struggles and seedy life of being an artist; how the only thing she had that was worth anything was a wine magazine subscription that her estranged father sent her. Madeline threw herself into wine, learned everything she could and eventually, used her visual gifts to create infographic posters that spoke to the new generation of wine drinkers. Madeline and her partner have built one of the most successful wine brands on social media as well as a best selling book, and it is all due to their hard work… as she says, she answers ever comment, every message, every email and when someone says she got something wrong – she looks into it, always, trying to improve her knowledge.

Then another kick ass woman (sorry but I can’t help but have a bit of female pride) Leslie Sbrocco, well-known wine TV personality and journalist, talked about how her initial plans of becoming a lawyer, eventually leading her to become the first female President of the United States, did not work out because that world was not conducive with her desire to share warmth and joy to the rest of the world… come on Leslie, you can still become POTUS, look at what’s happening now – you don’t need any direct relevant experience, please… a warm, kind, brilliant woman like you… okay, I’ll stop begging… I wouldn’t wish that job on anyone, especially such a bright light as Leslie Sbrocco.

And then there was the living legend Kevin Zraly, author and founder of Windows on the World Wine School. Kevin holds a special place in many New Yorkers’ hearts. Not only is he responsible for inspiring countless current leaders of the New York City wine industry with his school, but he came up with one of the most successful wine lists at the stellar Windows on the World restaurant, which was located on the 107th floor of the World Trade Center since 1976. Well, all of us know what happened on 9/11, and Kevin not only lost many co-workers that day, but he lost his love for wine, and quite frankly, life. All of us living here (I was living in downtown NYC at the time) fell into a deep depression. Just imagine 8 ½ million people in a dark hole of despair – none of us capable of helping the other.

But someone convinced Kevin that he needed to come back to teaching, to keep inspiring and lifting people’s spirits with wine. At first it was tough, but through time, sharing his love for this beautiful libation and connecting with the people in his classes helped to bring him back… it brought many of us back. His Window on the World: Complete Wine Course  book has sold over 3 million copies and everything in the book is inspired by questions his students have asked throughout the years.

This is All Part of the Story

I ended up getting poison oak on a big portion of the inside of my left wrist. It just started going away and all that’s left is a big scab. But, right now, as I look at that hard coating of skin, I smile to myself. Because at one point, as a handful of us had our ‘survivor’ moment out in the woods, Jim said, “This is all part of the story.” And it’s true – the joy, the pain, the regret, and hopefully the letting go of sadness to live another day to share… are all part of our story.

Master Tasting with Kevin Zraly at CIA at Greystone on February 23rd, 2017:

This tasting represented the pivotal wines that Kevin had over many of his visits to Napa Valley that held significant importance to him. 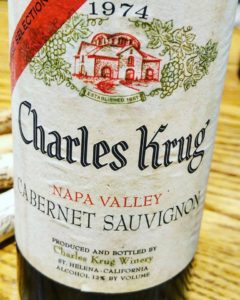 –1975 Beaulieu Vineyard (BV), Cabernet Sauvignon, Georges de Latour, Napa Valley: This 1975 BV Georges de Latour (my birth year) still had lots of freshness when I had it at the CIA a couple weeks ago. Flavors of tea leaves, sour cherries and mint. It was my favorite wine because of its elegance and complexity – we both seem to be doing well at this stage of our lives J 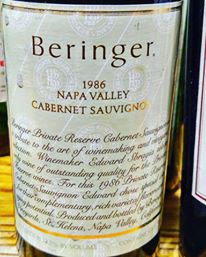 –1986 Beringer Vineyards, Cabernet Sauvignon, Private Reserve, Napa Valley: Beringer is one of the largest land owners in Napa Valley and it is said that they supply grapes to some of the top producers in this legendary area. And so, Beringer Private Reserve is a super star Napa wine that costs half the price of many cult wines made from their grapes. This 1986 was at a wonderful stage where it had plenty of blackcurrant fruit with layers of complexity that comes with age – tea leaf, cigar box and dried thyme – moderately firm structure with still a good bit of stuffing left. 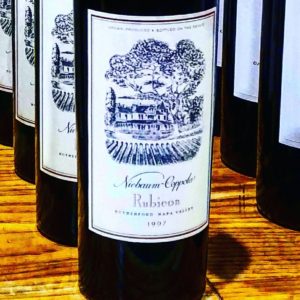 –1997 Inglenook (formerly Niebaum-Coppola Estate Winery), Cabernet Sauvignon, Rubicon, Rutherford: 1997 was a great year for quality as well as quantity and this Niebaum Coppola (Inglenook) Rubicon, with its brooding, dark fruit, balanced with hints of lifting notes of pomegranate and dried oregano with a luscious, silky body that draws one in like a beautiful dancer with silk scarves, is proof of the outstanding quality.

-2003 Louis M. Martini Cabernet Sauvignon, Lot 1, Napa Valley: This wine had a youthful sweetness with blackcurrant jam, cinnamon and plush tannins that Kevin Zraly and some others said was more in their style of preference with more fruit…. but he was quick to note that it is all personal taste. I like to taste a wine throughout its life, if given the opportunity, and that is why verticals are so much fun! I will take the sweet and the savory stages and everything in between. 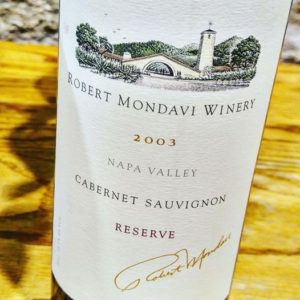 –2003 Robert Mondavi Winery, Cabernet Sauvignon, Reserve, Napa Valley: A stunning delicacy to this wine with purple flowers and bright red raspberry fruit, refined tannins… a wine that satisfies the mind as well as the senses.

This one 2012, as well as the following five 2013s, are all modern superstars since these were back to back great vintages in Napa Valley. But the 2012 is a lot more approachable with generous aromatics – the 2013s will need a lot more time to reveal themselves yet they are both structurally built to age. 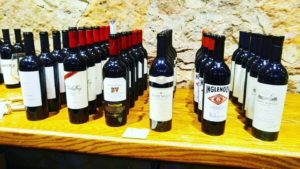 –2013 Charles Krug, Cabernet Sauvignon, Vintage Selection, Napa Valley: Cocoa powder with crushed rocks and a touch of dried herbs with a firm grip on the finish.

–2013 Beaulieu Vineyard, Cabernet Sauvignon, Georges de Latour, Napa Valley: A sweet spot wine with dried cranberries, a whiff of eucalyptus and interesting hint of graphite … the tannins are elegant and the finish is long and linear.

–2013 Inglenook, Cabernet Sauvignon, Rubicon, Rutherford: This wine had a nice approachability right off the bat, considering it is a 2013, with round, inviting body, fresh blackberry flavor. Dusty earth and charcoal add a depth of complexity.

–2013 Robert Mondavi Winery, Cabernet Sauvignon, 50th Anniversary, Reserve, To Kalon Vineyard, Oakville: This outstanding wine is a great homage to the visionary Robert Mondavi with its polished tannins and well-integrated oak. It incrementally increases in flavors on the palate that finishes with a lifted, pristine, breath-taking finish.

Celebrating Wine, Life and Inspiring Colorful People in New York City and Beyond!
View all posts by damewine →
This entry was posted in Dame Wine and tagged CIA, Napa Valley, Story, The Symposium for Professional Wine Writers. Bookmark the permalink.