Posted on December 11, 2015 by damewine
ShareTweet

It is always funny how South Africa is considered a New World wine making country, especially considering vines were planted there in 1655. This may be due, in part, to wine exports not starting to progress until 1994, the end of apartheid, and so it is New World in the sense of being “new” to the rest of the world. But the lack of popularity of South African wines in the US market, as compared to the great popularity in the UK, has always been a little mind boggling to me. 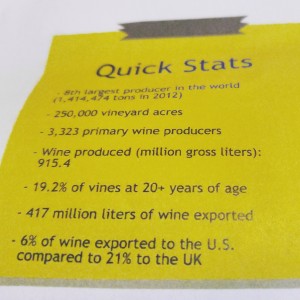 South Africa was a colony of the UK at one time, and even though the power of the British Government was completely abolished by 1931, South Africa seems to still be near and dear to many British hearts. It seems typical for people from the UK to travel to South Africa, and it seems many feel a strong connection to this country. This explains the quick stats, which were sent to me on behalf of Wines of South Africa, stating that 21% of all South African wines were exported to the UK.

Even though I remember hearing about apartheid when I was a kid, and the end of it with the election of Nelson Mandela in 1994, I was still ignorant of many things. I really had no sense of the current state of the country until I started to talk to British people in the wine trade. I learned from these conversations that South Africa still struggles to find harmony among its people and the UK is a big supporter of their efforts.

Apartheid is an Afrikaans word having a general meaning of “the state of being apart”, and it was a system of racial segregation in South Africa that was implemented by the National Party, which ruled from 1948 to 1994. Many rights were taken away from the majority black inhabitants and other ethnic groups while the minority Afrikaner (ethnic group mainly descended from Dutch settlers) ruled.

There is an incredible book out right now called Hungry for Wine. First let me disclose that I have met the writer, Cathy Huyghe, and I find her to be a remarkable human being. So one may say I am a little biased. But I simply love her desire to find the real human factor through wine. They are not contrived stories to sell wine, but are various short stories that take place around the world, which show how the realities of people’s lives affect the wines made and/or sold in that area.

Here is a brief excerpt from the book that talks about South Africa:

“Apartheid handicapped – and in some ways totally stalled – South Africa’s industry. The country as a whole was isolated, and its trade suffered from boycotts of South African products in protest of its apartheid system. Which meant, for example, restrictions on winemakers’ access to healthy plant material for replenishing their vineyards, and it meant delayed development in terms of machinery and technology.” –Hungry for Wine

I think the above is a great summation of the issues that the South African wine industry faced for a long time.

Why are they not more popular in the US?

I know Americans have been accused of being too self involved with their own country, and so we are ignorant of the rest of the world. And that is a fair point, but a point that I feel is sometimes misunderstood. We have had our own issues with racial discord with an unsavory past of the horrific period of slavery in this country, and bigotry is still very prevalent today. The African-American Civil Rights Movement, which took place from 1954-68, was not that long ago. And much of the damage, anger, bigotry and pain of the past is still very much alive in the present, and there are many other problems of racial discord with other groups as well.

America is one of the most culturally and racially diverse countries on earth. It is one of the reasons we are great, but it came at a cost to many people. And yes, we still have severe problems due to the historical injustices that have taken place in this country, and there is no easy fix.

Americans are typically overwhelmed by struggling with their own issues and so it is sometimes difficult to look beyond our own backyard, so to speak. Also, we do not have the past that the British have had with South Africa.

And finally, because of America’s diversity, typically brands that are easily accessible for various types of cultures do well. Hence, why Australia’s Yellow Tail has done so well (helping to promote entry level Australian wines while overshadowing all of their high quality wines).

But out of darkness comes light, which is exemplified by South Africa becoming one of the most socially responsible wine countries in the world, and the UK wine market has been very supportive in their move towards social responsibility.

According to Hungry for Wine, “In 2012, 65% of all Fairtrade wines sold in the world originated in South Africa.”

I was excited to taste two South African wines during a virtual tasting on Twitter last week that were mentioned in the Hungry for Wine book. Paul Culver’s Gewürztraminer, noted in the book for sharing resources with a BEE wine company; and a Creation Pinot Noir, noted for helping to start a community center where farmers and grape growers can work together.

I think passionate wine drinkers in the UK understand the potential of South African wines. At one time South African wines were inconsistent in their quality, as one can imagine due to their once limited resources, but they have significantly improved over the past 20 years. And when I say significantly improved, I mean there are some stunning wines coming out of that country. 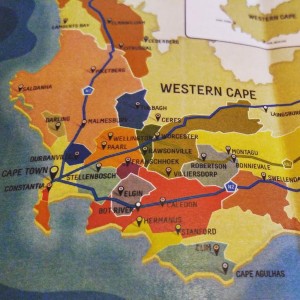 There is great climatic diversity in South Africa which is illustrated in the above map. They make various types of wines from various grapes that typically express good fruit ripeness with a strong sense of terroir. They are an Old World place with rich soils wrapped in a New World idealism of striving to be a place that lives in peace. 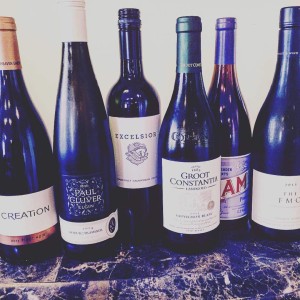 -2014 Paul Cluver Gewürztraminer, Elgin, South Africa:
Retail $16
My first South African Gewürztraminer, and I have to say, it was simply delicious with 10.2 g/l residual sugar, moderate floral aromatics with juicy lychee and ripe mango, and LOVE the textural extraction on this wine

-2013 Creation Pinot Noir, Walker Bay, South Africa:
Retail $28
A great sense of place with an attractive wet forest note that smells clean yet savory, black cherry and round tannins with a light body that gives lots of flavor

-2013 Excelsior Cabernet Sauvignon, Robertson, South Africa:
(90% Cabernet Sauvignon & 10% Petit Verdot)
Retail $7
I can’t believe this wine is only $7 bucks! Yes, not ridiculously complex, but it is simply tasty with blackberry fruit, exotic spice and a soft body that goes down a little too easy

-2013 LAM Pinotage, Swartland, South Africa:
Retail $15
Pinotage was given a bad name because it is a difficult variety to grow, but now with only 6.9% of the vineyards planted with Pinotage, it is really only a variety that is made by specialists of the grape, and hence this lighter style of Pinotage showed pretty raspberry flavors with a touch of cigar box – wild to have a wine that was light and refined in style with cigar box notes, I have not had anything else like this

Celebrating Wine, Life and Inspiring Colorful People in New York City and Beyond!
View all posts by damewine →
This entry was posted in Dame Wine and tagged Hungry for Wine, South Africa. Bookmark the permalink.