Posted on November 4, 2016 by damewine
ShareTweet 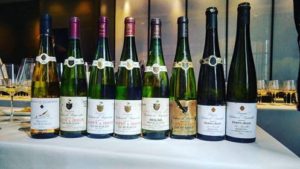 Various research companies have estimated that up to 90% of wine purchased in the US is consumed within 24 hours. Of course, this could range between 70-90% depending on different factors – many people may purchase a significant amount of wine in advance for special events such as New Year’s Eve. But it stands to reason that most wine drinkers are not holding on to wine for aging purposes, and that makes sense, since there are very few wines that are meant for aging.

Yet the aging of wine is a concept which I think, even by consumers who don’t experience it often, intrigues wine drinkers.

We think of the great Cabernet Sauvignon dominated red wines of the world, Bordeaux and Napa Valley being just a couple of examples, as the most age-worthy wines. Yet there are various types of wines that have what it takes to be long distance marathon runners – great Riesling, a white wine no less, is known to make magnificent old bones. 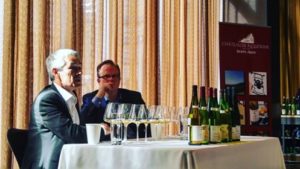 A few weeks ago, I had the pleasure of tasting 8 different decades of a fine wine Riesling from Alsace made by Château de Riquewihr Dopff & Irion at a trade event in New York City. It was a chance to illustrate how well this particular Riesling, from a vineyard designated by the owner as Les Murailles, would fair over the years.

Qualities Depend on Taste 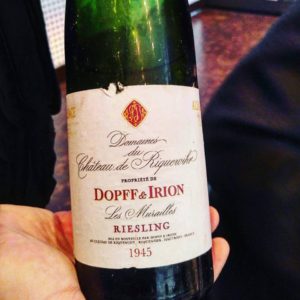 I naturally thought that each wine would show its age more and more as we tasted from youngest to oldest, but that was not the case. Some of the oldest wines, 1945 and 1953, seemed younger than 1976 or even the 1992. This discrepancy between my expectation and reality may have had to do with various issues of wine closure and/or amount of SO2 (sulfur dioxide), nevertheless, it is interesting to think that perhaps the differences had to do with the distinctive characteristics of each vintage.

The room was filled with sommeliers and journalists who each had their own favorite, and actually the “winner” seemed to be the 1953 with its shocking vigor still intact and bright spirit. It seemed like an enthusiastic child that was a little more colorful than its classmates, as noted by minty aromatics – the tiny hint that suggested an evolved Riesling. Honestly, if someone gave me that wine without telling me the vintage, I may have guessed that it was no more than a decade old. 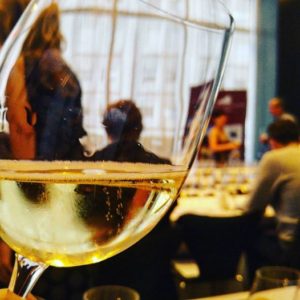 My favorite was the 1976 (actually only one year younger than me) as I thought it wore its age openly, with pride. Obviously, it was a several decades evolved wine with nutty, smoky aromatics that were the first to say hello, and although it still had enough verve to keep it fresh, it had a soft, round body. There were a few people in the room that expressed a lack of interest in it as it did not have the tension or taut body of the others. I thought it seemed to be more confident as a wine that sat back with nothing to prove – this wine did not need to jump out of the glass like it did in its youth – it had valuable things to offer in its more evolved state. This quality of being significantly different than its youthful counterparts was exactly what some people did not like… while it was the very reason why it was my favorite.

There are some basic qualities that all wines need to have, whether young or old, to be considered a great wine. There has to be balance, long length and enjoyable aromas and flavors – although it is difficult to be objective about the last point. Some may add if it has the capacity for long term aging depending on the style of wine. The consensus of the room that day was that the vertical showed that this was a high quality producer capable of  making wines that were age-worthy. But I found it fascinating that some people found the older wines, which seemed like their youthful versions, to be the most appealing.

I remember when I first started to drink older wines, delving into those that were a decade, a couple of decades and then eventually drinking the oldest wine I have had which was a 1875 Madeira (a fortified wine). My first few experiences were a little jarring. It took time to get used to the different types of positively evolved aromatics that came with aging. But through time I started to fall in love with older wines to the point that I would crave them.

If I were to give a general, and I mean general, description of high quality aged wines in their prime, I would say the following: the fruit is in the background and/or is altered into deeper, darker flavors; savory notes would dominate and there is typically a more supple quality that needs time and focus to appreciate. The wines don’t sing, commonly; if anything, they are “over” singing – they had done their song and dance earlier in their life to gain attention, and now, they don’t need attention. But don’t get them wrong, they are happy to have a long, intimate conversation.

To me the greatest old wines show their age – they are survivors and that should be celebrated. As long as an older wine can pass on the tough savory lessons of a life long-lived, still with flickers of the sweet fruit of hope, then it can be a truly special experience that no adolescent wine can emulate, even with all the decanting in the world. Some results only come from age, and the best come from a long life believing in the promise of a better tomorrow.

Château de Riquewihr, located within the fortified city walls of the town of Riquewihr, in Alsace, France, was constructed in 1549. The Dopff and Irion families, having a vineyard lineage dating back to the 16th century, purchased Château de Riquewihr in 1945 with René Dopff leading the way to update the winery, labeling, as well as matching grape varieties to their appropriate terroir. Hence, one of their top wines, Riesling from their personally designated Les Murailles, does not have Grand Cru status because, in his eyes, some of the best vineyards fall outside the boundaries, as well as some mediocre vineyards he did not want to use were considered within the Grand Cru. But the wines below certainly show a nobility of being fine wines, and hence, the proof is in the pudding.

Some of the below bottles had been recorked to keep the integrity of the seal. 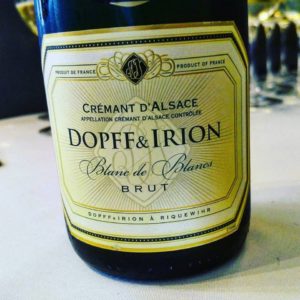 (Initially greeted with a Crémant d’Alsace Blanc de Blancs Brut NV which showed their modern labeling as well as being delightful with 50% Pinot Blanc and 50% Pinot Auxerrois, with notes of honey covered apples and blanched almonds.) 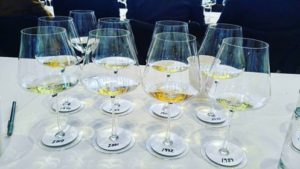 -2010: Tight with marked acidity and citrus zest as the main characteristics that are prevalent in this wine, more layers hidden, hints of white flower and lime blossom, but needs a lot more time to show its potential.

-2001: Intensely smoky, flinty minerality notes dominated this wine with a touch of honeysuckle.

-1992: Surprisingly, this wine had the most oxidative notes which could be due, in part, to bottle variations with this vintage.  I personally liked it, being a fan of Sherry-like wines – bruised apple, roasted cashews with ashy aromas in the background.

-1989: Lovely purity of fruit with white peach and nectarine that had an added layer of complexity with white stones, good flesh and ripeness on the body but the wine still had an overall quality of being taut and concise.

-1976: Toasted almonds, smoky minerality, broader and richer than the other vintages yet still balanced beautifully, softer acidity…peach and lemon confit flavors carried along the sustained finish.

-1969: Very different wine than the rest with pronounced perfume nose, spice on the palate, a hint of mushroom on the finish.

-1953: A touch of mint, more herbaceous notes than fruit flavors, linear in shape, still had lots of fierce energy.

-2015 Riesling Cuvée René Dopff: (grapes bought from 200 selected wine grape growers) Lots of juicy stone fruit flavors with a broad body and richer texture than typical for Riesling – a good wine/vintage to try for those who like a richer style.

-2014 Crustacés: (grapes bought from 200 selected wine grape growers) 90% Sylvaner and 10% Pinot Blanc. Chamomile tea, pear, melon and a clean finish made this a fun choice to have with seafood.

–2011 Riesling Grand Cru Schoenenbourg: An exhilarating wine with a great back bone of acidity that gives it a kick of verve throughout the long finish with floral, sweet peach and anise aromatics that finish with an intense minerality.

-2009 Pinot Gris Grand Cru Vorbourg: Anyone who questions if Pinot Gris can be aromatic should try this wine. Pretty honey notes with exotic tropical flavors and a full body.

Celebrating Wine, Life and Inspiring Colorful People in New York City and Beyond!
View all posts by damewine →
This entry was posted in Dame Wine and tagged ageability, Alsace, France, Riesling. Bookmark the permalink.