A Life of Intention

Posted on June 4, 2018 by damewine
ShareTweet 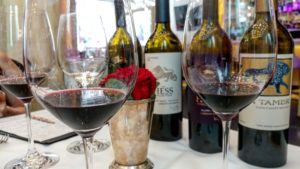 “It is a visit of intention” said Nicole Carter, Director of Winemaking at Hess Family Wine Estates. She was talking about their mother ship winery founded by the living legend Donald Hess that was perched on Mount Veeder in Napa Valley – with very few other wineries that had the facilities to accept guests on the mountain, Nicole said if you visited their winery it really had to be a visit of intention.

The idea of living with intention is a powerful one that is actually simple for most of us. It is an exercise of the mind that those who practice mediation, yoga or Buddhism may know very well or perhaps you may even know it without being involved in any of the aforementioned practices. Our intention can be as simple as focusing on our breath, trying to be more empathetic or firm with our dealings with people, or forcing ourselves to take on the challenges we avoid. It is a decision that we can make each day to notice something that we would like to either work on or simply just be aware of. Instead of sleep walking through life, we actively engage and take responsibility. It can be transformational to get us out of ruts where we stop caring, stop feeling, or stop wanting to participate. 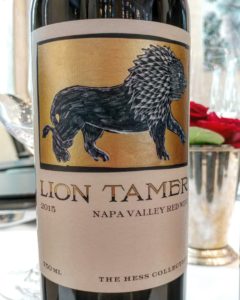 Swiss-born Donald Hess is a very successful business man who has been involved in making beer, mineral water, and wine. He is best known here in the US for having one of the most impressive contemporary art collections in the world and being one of the largest land owners of vineyards in Napa Valley that was started with his first purchases in 1978 and almost 1000 acres (400 hectares) accumulated today; he has furthered that legacy by producing some of the top mountain Cabernet Sauvignon with an interesting spin of adding a significant amount of Malbec to certain blends. Donald has a deep understanding of the Malbec grape as he has 2 estates in Argentina specializing in Malbec, and one of the wineries, Colomé, has one of the highest vineyards in the world – and so high altitude vineyards are in his blood.

When a person gains a certain amount of money and resources, there is a greater responsibility to live up to stronger intentions than the average person that not only impact communities but also the world. Since 1978, Donald has been a leader in long-term sustainability with the attitude, “nurture the land and return what you take” at a time when the word sustainability did not have the value that it has today; he has even had a talent in finding usable water in areas of Argentina where it was unheard of; his contemporary art collection – a small portion is housed in a three story museum that was built on the property of their Mount Veeder Estate – has helped to support many artists as he buys from those he has developed a relationship with and continues to purchase their works throughout the span of their careers while refusing to buy their works after they have passed away; his intention is to support artists long term while they are living and not to give in to trends or buy based on investment purposes.

The World We Create 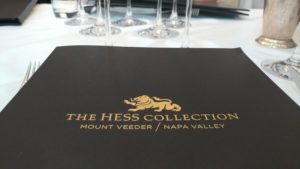 Donald Hess did not want to just make mountain wines in Napa, he wanted to show others that it was possible to make excellent wines out of mountain fruit that at one time no one wanted anything to do with… and he has never given up on always striving for a higher standard with constantly examining if they are making the best wines they can and the answer is always no, and so, the intention is always renewed. Nowadays you cannot throw a stick in New York City without someone trying to talk about mountain wines, as they have only recently become trendy, actually sometimes over-exaggerating the idea of what a mountain constitutes depending on the producer… but Donald always knew and he had the intention that he needed to show the world that what they thought was impossible was possible. Donald has now officially handed over his winery to his daughter Sabrina and son-in-law Tim Persson as it is time for him to sit back in his home in Switzerland and have the warmth of memories of a life well lived – for shaping the world into a better place – wash over him with a deep contentment.

When I think about when I am old and tired and all I have is the energy to examine my past intentions in life, I wonder what I will take pride in… to live with honor, to live with passion, to live a life where I felt I made one person’s life better each day I lived… that is what takes The Hess Collection to the next level… the intention… some thought it could never be done, and some would question even after success if Hess had peaked, and each time the Hess family comes back with the ferocity of a lion, the symbol of their Hess family for many generations, with a more committed intention than before to continue to be a beacon of inspiration … our life only lacks meaning if we do not stay true to our intention. 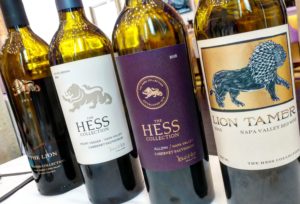 Although Hess is fortunate enough to have many vineyards on Mount Veeder in Napa Valley that can express a vibrancy and complex aromatic profile that only mountain fruit can produce, they have, over the years, realized that their management of tannins needed to be drastically improved, and so through many innovative techniques such as shade cloth in their vineyard that helps with phenolic ripeness, they have drastically improved the mouthfeel of their wines. Their intention for improvement still lives on and I am excited to see what the future holds.

–2016 Hess Collection, Chardonnay, Napa Valley: 100% Chardonnay with 9 different clones (biotypes) used such as the unique Musqué clone. This wine leapt from the glass with pretty honeysuckle and pear notes with rich peach and spice on the palate and had energetic drive with a hint of seashell on the finish. 2016 was a balanced vintage that saw ideal conditions.

This Chardonnay comes from one of their Napa estates that is around 175 acres (70 hectares) in the southern portion of Napa; surprisingly enough this Napa property is south of Carneros and really only Chardonnay is planted there because of its proclivity for producing elegant Chardonnay. One of the 9 clones (biotypes) they use is Musqué which is not that commonly planted in Napa – it is an aromatic clone that has an overall delicate quality to it and does not take well to oak or MLF and so the wine is lightly oaked and only partial MLF – 70% of the wine is fermented in stainless steel, 30% in oak (only 9% in new French oak) and that 30% is the only wine that goes through MLF. It is aged 9 months in neutral barrels.

–2015 Hess Collection, ‘Lion Tamer’, Red Blend, Napa Valley: 50% Malbec, 23% Zinfandel, 11% Petite Sirah, 6% Cabernet Sauvignon, 4% Petit Verdot, 4% Merlot and 2% Mourvèdre. This wine stood out as a real favorite of mine because there is nothing like it that I have tasted and love the name: Lion Tamer. It is a real generous wine with lush fruit (plum tarts and blueberry pie) with a round inviting texture and pretty hints of violets and vanilla bean. 2015 had one of the earliest harvests on record and so the grapes varied in size and ripeness level and makes for some interesting drinking with ripeness and freshness present in these beauties.

The name Lion Tamer is a nickname that Hess uses for Malbec since they use it as their tannin tamer – also, Hess has 2 wineries in Argentina that focus on Malbec and so they understand its great potential when grown at higher altitudes. This is the only wine that uses American oak but it goes so well… and as I like to remind those who may not know that not all American oak is created equal and actually some can have a lovely subtlety to them, such as this one.

–2015 Hess Collection, ‘Allomi’, Cabernet Sauvignon, Napa Valley: 92% Cabernet Sauvignon, 6% Petite Sirah and 2% Petit Verdot. This wine had an intriguing earthiness to it with cracked clay and forest floor that had a touch of firmness in its structure. Black currant leaf with dark brooding fruit that was linear in its shape.

Their Allomi Vineyard lies in the gently rolling hills of northeastern Napa Valley where the combination of a typically long, warm growing season and well-drained soils create optimal ripening conditions for Cabernet Sauvignon. The 210 acres (84 hectares) vineyard is focused into 35 unique growing blocks with 6 different Cabernet clones (biotypes) that add diversity of flavors and complexity to wine. In each vintage, their winemakers and viticulturists evaluate each block and select only the finest components for the final blend. Aged in 40% new French oak barrels for 22 months. 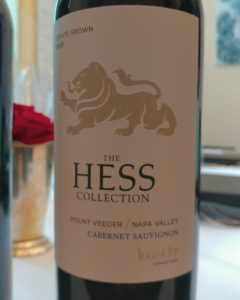 –2013 Hess Collection, Cabernet Sauvignon, Mount Veeder in Napa Valley: 82% Cabernet Sauvignon and 18% Malbec. This wine has a wild, brambly quality that is cloaked in refined tannins and overall charm that really shows the beauty of Cabernet from the mountains. A dominant cassis note has layers of complexity with caramel, underbrush and enticing smoke with an elegant exit on the palate that shows the incredible skill of tannin management that Hess has acquired over the years dealing with cooler climate Cabernet. 2013 is simply described as “Early, even & excellent”.

This is the Hess Collection’s signature Mount Veeder Cabernet Sauvignon which comes from their Veeder Hills Vineyard estate that Donald Hess bought in 1978. The elevation of this vineyard ranges from 600-1,120 feet (183-340 meters), and its steep slopes and sedimentary clay and shale soils restrict root growth, resulting in Mount Veeder’s hallmark small berries with intense fruit flavors. Aged in 80% new French oak barrels for 22 months. 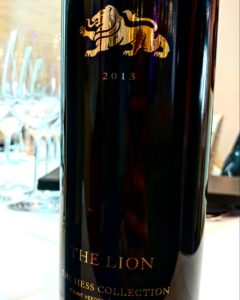 –2013 Hess Collection, ‘The Lion’, Cabernet Sauvignon, Mount Veeder in Napa Valley: 82% Cabernet Sauvignon, 17% Malbec and 1% Petit Verdot. From the first sip, this wine has a sensational depth of flavor with intense blue and black fruit that is multifaceted and multi-dimensional with a new delightful note revealing itself with each sip: cigar box, smoldering earth, cumin seeds, and cocoa. Powerful structure that is at the same time supportive to the fruit as well as welcoming with its fine laced quality and the finish is vibrant and lingers with exotic spice. This wine will probably be approachable in a few years but man does it have all the stuffing in the right places to continue to improve for 15 more years.

The Lion has been the emblem of the Hess family for many generations. It has come to symbolize the bold and preserving nature of founder Donald Hess and their winery home on Mount Veeder. “Live Each Day with the Heart and Courage of The Lion” is the Hess family credo and The Lion Cabernet Sauvignon represents the very best Cabernet they produce from their estate vineyards on Mount Veeder in the very best vintages. The 2014 marks the second vintage that is a winemaking collaboration between consulting winemaker Celia Welch and Hess winemaker Dave Guffy. Aged in 65% new French oak barrels for 22 months.