Our Purpose in the World

Posted on June 3, 2018 by damewine
ShareTweet

The glow from the sun lit the colorful tables covered in cheeses, cured meats and delicious wine as people exuded the “joie de vivre” energy as upbeat French music played in the background. For a second, I thought I was in Beaujolais, France, as all my cares melted away but I was in the concrete jungle of New York City (NYC), tucked away in the back courtyard of a restaurant… that was the power of the Beaujolais wine that was free flowing that day, with its light body, bright fruit and spice, and a silky texture… one minute I have my warrior shield on maneuvering my way through the mean streets of NYC… the next minute I had a big smile on my face ready to dance in the sunlight while I drank Beaujolais.

I had stopped by a wine event where Cellar Master of Bouchard Père & Fils, Frédéric Weber, was introducing people to their property in Beaujolais: Château de Poncié. I had just seen Frédéric a couple months earlier during a preview of their 2016 Burgundy wines and it piqued my interest to find out more about their vineyards in the wine region just south of Burgundy.

Let me first start out by stating that there is NOTHING like Burgundy when it comes to wine; but with that been said there are a few connections between Burgundy and Beaujolais. At one time when someone spoke of the Burgundy wine region, he/she would be including the Beaujolais area, even though it is around 70 miles south of the other Burgundy districts and their flagship red grape variety is Gamay instead of Pinot Noir. Today it would be considered wrong by many to officially include Beaujolais wines within the Burgundy wine region and you may have some hardcore Burgundian nerds bite your head off if you try.

Yet there are still many wine producers, especially the ones who have been around for a long time, who will talk about the connection between the two areas; winemakers influence each other, family trees will have a mix of those from Beaujolais and those from Burgundy, and Beaujolais becomes a much needed reminder to the Burgundians of their fun side – which is not so easy since there is intense stress of the hefty responsibility of carrying the Burgundy flag.

A long time ago, Beaujolais realized that their place in this world was to make people, all people, happy and joyous with their easy charm and playful approach. In regards to quality, there are a range of wines in Beaujolais such as Beaujolais Nouveau, Beaujolais-Villages, and the top Beaujolais Cru wines – there are 10 Crus of Beaujolais with Fleurie being one such Cru known for its intoxicating aromatics, distinctive floral note (hence the name) and its overall elegance; but even with the top wines there is a whimsical nature that makes these wines delightful to so many. 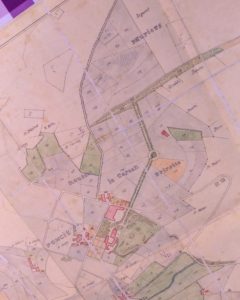 Since I was admiring the map that was spread out on one of the tables at this Beaujolais event, I had to ask Frédéric about it and I came to find out that it was a duplicate of a map made of linen that was found at Château de Poncié that at least a couple of thousand years old. The Château de Poncié, with its heritage dating back to 949 AD, is sectioned into several plots due to the distinctive varied expressions each plot gives that this ancient map alluded to, as well as it being a very Burgundian way of thinking about vineyards – each plot is a unique terroir. Frédéric started to beam ear to ear as he talked about each section of the vineyards and all the fascinating nuances each brings to the wine; that is why they have three different Fleurie Cru wines because certain plots go better with others. I was given the chance to taste two of their Fleurie Cru, Le Pré Roi and La Salomine, that day as well as the 3 vintages we tasted. Despite all the wines revealing diverse qualities, they all had the ability to make my heart dance. 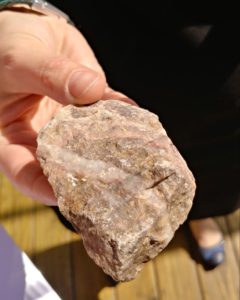 But it really made me think hearing Frédéric talk about the intricacies of the soil and seeing the famous pink granitic crystalline rock in the soils of top Fleurie sites with my own eyes as Frédéric brought samples with him to NYC; Beaujolais could have been part of the fine wine world but they realized that their place in life was to bring joy to so many around the world.

The Choices We Make

All of us around the world need to make choices because, unfortunately, there are some who are not willing, or simply do not have the time to look deeper within a person, or even a wine area. We can walk through the world with fierce formality that commands respect or we can wear our hearts on our sleeves with friendly smiles that automatically sets others at ease. There is no right or wrong way to walk through the world as both are needed… but although Beaujolais is so much more than just a joyous drink, I am happy that they realized that giving joy to all wine drinkers is a pretty fine purpose for a wine to serve in this world. 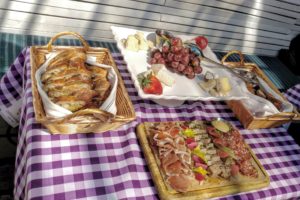 The Le Pré Roi plots are situated on the knoll of Poncié and the hill of Montgénas, terroir on slopes of crystalline rock.

-2015 Le Pré Roi: The 2015 vintage was called one of the best of the past 100 years in Beaujolais because of lots of concentration yet plenty of acidity. This Le Pré Roi had rich blueberry and black cherry flavors, hints of violets and a spicy finish… rich, expressive and delicious yet lots of structure so this baby could last!

-2010 Le Pré Roi: A lovely finesse and complexity to this wine with its notes of rainforest, a saline minerality and subtle hints of Jasmine tea on the finish.

The La Salomine sloping hillsides with its southeast exposure and good drainage has pink granitic crystalline rock, quartz and some clay. 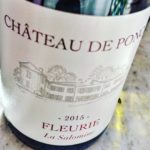 -2015 La Salomine: Deeply layered dark fruit with licorice root and a plush body with a fierce backbone of minerality; a superb length of flavor on the finish.