Enjoying Wine and Food from Alsace, with a Side of Philosophy

Posted on May 1, 2017 by damewine
ShareTweet 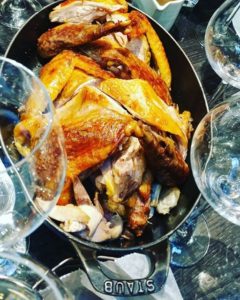 With a beautiful golden guinea fowl in front of me and drinking wines that were inviting yet never over-zealous, I sat there taking it all in… the charming bistro of Le Coq Rico and the enchanting sounds of conversations in French. For a second, I thought I was in France, specifically the region of Alsace, as I was, at one point, surrounded by Owner/Chef Antoine Westermann, who is a legend from that region, and Alsace wine producer Rémy Gresser while sipping his delightful Alsace wines. But we were in New York City having an Alsace experience with conversations that meandered from food to wine to deeper philosophies of life. 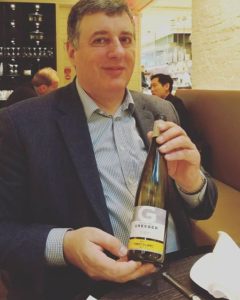 Rémy has a big, imposing frame yet he could not be more gentle and sensitive in his demeanor. He was very keen to talk about the increase in female ownership of Alsace wine estates, but he also noted that although his father was the one who technically ran their family winery and vineyards, Domaine Gresser , it was his mother who tasted the wines and shaped the stylistic choices as a producer. Rémy said his own palate was shaped by his mother and always leans towards wines that are refined and elegant as she would always prefer. When we were tasting his 2015s, he even remarked that he preferred the cooler 2014 vintage because it was more subtle…although many people seemed be more drawn to the wealth of fruit flavors in the ‘15s.

We ended up discussing women’s roles in the past compared to the present. Centuries ago it was thought that women were the weaker sex not capable of being able to do anything beyond running the household; perhaps this came down to the practical fact that many women did not survive child birth and so you needed someone else who had a probability of living longer to support the family. As time went on it became the norm for men to go out to the world to carve out a career or run the family business. Interestingly, in China, since people are relatively new to owning their own businesses, that around 50% of them are owned by women. This was explained to me by a Chinese friend as being contributed to the lack of having a history of entrepreneurship and so there were no previous barriers created for women in the first place.

Rémy had a wonderfully simple idea that people should take the roles they are best suited for, no matter their gender or any other superficial factor. From his perspective, his mother was always in charge but he whole heartedly agrees that living in a world where female leadership is openly recognized is the best for a balanced society.

Who must do the hard things? He (She) who can.

My conversation with Rémy reminded me of a line from Trevanian’s book Street of Four Winds about the Paris revolution of 1848, “Who must do the hard things? He who can.” Through the years I always tried to interpret what that line meant on a more universal level – at first I thought it meant that only a few people who had what it takes, whether they were men or women, could take on the fierce challenges of fighting the good fight in the world. But through time I have altered that viewpoint. Who is to say what the “hard things” in life are? Is not staying home with small children just a difficult as running a business? Recenly, I met one woman who said that her husband stayed home with their baby while she worked… they didn’t plan it that way but it just made sense since she liked working more than being home and he liked staying home with the baby more than working.

Or sometimes life presents us with a path that we thought we would never follow, we never envisioned ourselves living, because it never occurred to us that it was an option. Simply the act of getting up everyday and trying to live an honest life filled with decent acts makes us capable of doing the hard things in life.

As I sat there with Rémy and a couple of colleagues, it was wonderful to be able to enjoy an exquisitely golden bird and taste wines that begged for another sip as we openly talked about our various opinions with smiles, laughs and pausing here and there to allow the opinions of other people to expand our own minds. These are the moments in life that I cherish, that I depend on to grow… these are the moments that will mend a broken world.

Wines Tasted at Lunch with Rémy Gresser on March 31st, 2017 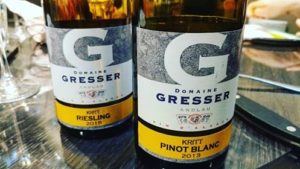 All of the wines are from Rémy’s Kritt vineyard in Alsace, France, which comes from predominantly gravelly soil that produces wines with a great purity and expression of varietal characteristics. Alsace is a wine region with various types of soils that are capable of showing the ranges of complexity for different grape varieties.

–2013 Domaine Gresser, Kritt Pinot Blanc: 100% Pinot Blanc. If you are like me, perhaps you have had your share of Pinot Blancs that have very little distinctive varietal characteristics, and I was nervous that this one was going to be the same. Thank goodness I was wrong – it was brimming with apple-y deliciousness and peach flavored cream with a spicy finish. 12.5% abv & 3g/l residual sugar

-2015 Domaine Gresser, Kritt Riesling: 100% Riesling. The 2015 was a warmer vintage for Alsace and a good contrast to the cooler 2014 vintage (side note: 2014 is a great vintage for sparkling Crémant) and so this wine had good generosity of quince paste and honey suckle flavors that had a nice lift of citrus peel on the finish. It was absolutely dreamy with the guinea fowl at lunch. 13% abv & 4g/l residual sugar

–2015 Domaine Gresser, Gewürztraminer: 100% Gewürztraminer. Typically, I find the Gewürztraminer fruit a bit muted when they are made in Alsace (its noted home) as compared to Chile…not saying one is better or worse – just different. But the pristine lychee flavor on this wine really made this wine jump out of the glass, the floral aromatics taking a backseat to the fruit flavor. I thought leaving it at 12.5% abv with 10g/l residual sugar was a good choice as there was never a sense of it being too sweet and there was none of the heat that one can get on the finish of a Gewürz… it was so tasty that I forgot to take a picture of this bottle.

Martine’s Wines is the exclusive importer for Rémy Gresser in the United States.

Celebrating Wine, Life and Inspiring Colorful People in New York City and Beyond!
View all posts by damewine →
This entry was posted in Dame Wine and tagged Alsace, France, Philosophy. Bookmark the permalink.