Assyrtiko: The RoboCop of Grape Varieties 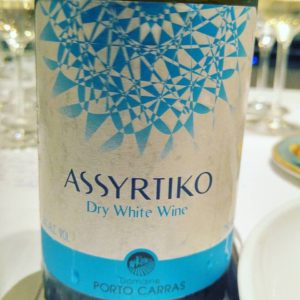 Greek Master of Wine Yiannis Karakasis said with complete confidence: “Assyrtiko for me is like a RoboCop – it is a very powerful variety.” This was one of the many interesting, as well as entertaining, talks given by Karakasis at a Greek wine dinner in New York City to showcase the wines of Domaine Porto Carras. Why call Assyrtiko RoboCop? It has high alcohol and high acidity which is not common. Assyrtiko has high alcohol for a white wine, averaging around 13.5-14% abv, and yet one can always count on it for crisp acidity even when it reaches full ripeness.

And what is RoboCop? A US movie from the 1980s (remade in 2014) that showed a good hearted police officer turned into a crime-eradicating cyborg. RoboCop had the super strength to be the protector that everyone needed – and Assyrtiko has the full body and refreshing finish to be the white wine of choice for various wine lovers.

I rarely go out to wine dinners. I make exceptions, here and there, for either an opportunity to taste wines I normally don’t get a chance to taste, such as Viognier from Cahors, or more often than not, it is at the request of someone who I find to be a very kind, good person.  Of course, I do, sometimes, have to turn down those who are kind and good also, since the major reason I do not go to dinners is so I can spend time with my husband. And so if I have been away on a work trip recently, I even have to say no to those people who I value as wonderful human beings. But the timing worked out this time.

There were two people I had familiarity with who were involved in this wine dinner, Yiannis Karakasis and Keith Edwards. Keith Edwards is part of a group called #winelover-s, of which I am a major part of as well, and a great guy that has a brilliant, well researched wine blog. And the other is Karakasis, who was in the Master of Wine program at the same time as me. As many of you know I am no longer in the program – I was happy I did it, and do not regret it, but I’m very happy to get back to my life and those that I love. So I was more than happy to see both of these special human beings. Since the wine dinner was led by Karakasis, I’m going to focus on him.

Karakasis was on the fast track to becoming an MW. He is an extremely disciplined individual who undoubtedly worked extremely hard for many years to achieve the title. But I have to say that even though he was on the fast track, he always had time to share a smile, a laugh and words of encouragement with anyone who crossed his path.

“You can easily judge the character of a man by how he treats those who can do nothing for him.” — Malcolm S. Forbes

I have met many people who wanted to be my friend because they liked me as a person; others had no interest, blowing me off instead to hang out with others until they hear I have gained any sort of success… then those same people come after me aggressively, trying to, all of a sudden, befriend me. I’m sure all of us have experienced this and it is something that you just need to grapple with in regards to living life. Yiannis Karakasis was always the type of guy to talk to anyone who was nice. It was evident when I met him he had a strong sense of character.

Karakasis graduated from the Hellenic Navy Academy as an Ensign and thereafter served on various warships, having flown 2,000 flying hours as a pilot, instructor and test-pilot with AB-212 navy helicopters, retiring as a Commander in 2011. So maybe his character has to do with the discipline he gained so early in life; or maybe he has always had a strong character.

It was not only very symbolic to compare Assyrtiko to RoboCop, not only because of the combination of high alcohol and high acidity, but it was also symbolic for someone like Yiannis Karakasis to use the term because to me he is RoboCop. Under extreme circumstances (the MW program is a long and extremely stressful program) he was able to greet everyone with down to earth warmth. In the movie, RoboCop’s character is tested, and ultimately he places his life on the line to do the right thing. His strength of character is never broken. 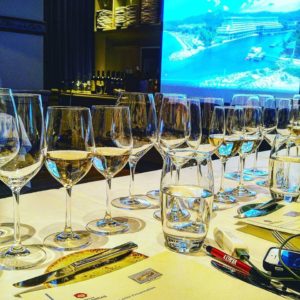 The theme of strength of character, of being a RoboCop, was carried throughout the evening as we tasted the wines of Domaine Porto Carras. Yiannis Carras aka John C. Carras, founder of Domaine Porto Carras, had a grand vision for the winery. He built it to the highest standard in the 1970s and hired the father of modern winemaking, Professor Émile Peynaud, to elevate their wines to the highest standards.

In 1999, the Stengou family bought the winery as well as the entire property including two hotels, a marina and vineyards. Yliana Stengou now manages the winery. She has a background in civil engineering and has taken the esteemed WSET (Wine and Spirit Education Trust) classes. She proved to her father through hard work and strength of character that she could not only survive in a man’s world but she could thrive – and ultimately he knew she was the right person to run this iconic Greek winery. Today Domaine Porto Carras is the largest unified vineyard in Greece and one of the largest organic vineyards, 356 hectares (880 acres), in Europe and the Balkans.

The Legacy We Leave

Sometimes we get so wrapped up in the outside layers of things that we forget that a great legacy is not necessarily made from titles, money or accomplishments (even though people should certainly be proud of hard earned rewards). A great legacy is how we treated those around us even during our toughest times. Strength of character is not something one achieves and then doesn’t need to ever worry about again. Strength of character needs to be worked on everyday – it is a practice – it is a discipline – it is a way of life. RoboCop was not a hero solely due to him being part robot and having abilities beyond other humans; he was a hero because even though he typically was the one with the power, he never lost the best side of being human.

Tasting of Domaine Porto Carras Wines at Molyvos Restaurant on May 19th, 2016

-2015 Melissanthi: A blend of Assyrtiko, Athiri and Roditis. Delicate flavors with citrus and a touch of mint. Refreshing and nice as an aperitif.

-2015 Malagouzia: 100% Malagouzia. This ancient white Greek grape variety was virtually extinct until Domaine Porto Carras brought it back. Tropical fruit flavors with accents of dried flowers and a full body.

-2015 Assyrtiko: 100% Assyrtiko. Skin contact, lees aging and time in neutral French oak for six months. At first I thought I was not going to like this version of Assyrtiko, with seasoned oak influence instead of typical stainless steel. But I have to say this was my favorite wine of the night. Even though I like the fresh versions from Santorini, I really thought this richer style of Assyrtiko, which comes from the Meliton Slopes, was complemented by the oak. I never thought such a young Assyrtiko could be so complex with nuts, honeysuckle, peach cobbler and a textural intricacy that really made this a world class wine.

-2015 Chateau White: Blend of majority Assyrtiko and Malagouzia, with nine months in oak. A big wine with lots of fruit, body and spicy notes. It would be interesting to see this evolve with time.

-2012 Magnus Baccata: Blend of Syrah and Cabernet Sauvignon. Black currant liqueur with pepper and tobacco leaf giving it depth of flavor. It had intensity on the palate with bright acidity and firm tannins. 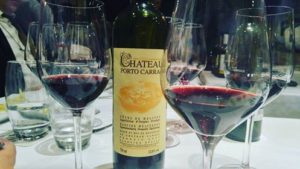 -2006 Chateau Red: Blend of Cabernet Sauvignon, Cabernet Franc, Limnio and Merlot. A rousing, smoky nose that reminded me of cigar box and grilled figs. Silky tannins that melt in the wine created a smooth finish. Certainly one of the best Greek red wines I have had and it showed the great potential for reds in this area.

-2013 Limnio Ruby Heart: 100% Limnio. A Greek red grape variety indigenous to the Greek island of Lemnos. Some wine historians believe it was the grape variety, Lemnia, that was described by Aristotle. A pretty nose with brambly berries, vanilla and new leather. It had very light tannins with a gentle finish that left notes of cinnamon in my head.

Celebrating Wine, Life and Inspiring Colorful People in New York City and Beyond!
View all posts by damewine →
This entry was posted in Dame Wine and tagged Assyrtiko, Greece, Greek Reds, Limnio, Malagouzia. Bookmark the permalink.