To Be Only Human

Posted on March 24, 2020 by damewine
ShareTweet 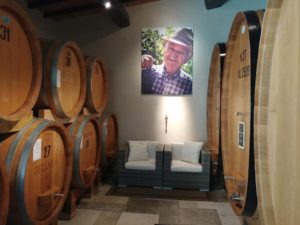 Animals’ simplistic wiring of only needing the basics in life can make them better partners in regards to living in harmony with Mother Nature compared to complexity of humans’ egos that can lead them astray. Human beings can get lost in the fast paced world that is fiercely carved out by a powerful corporate dominance; we end up living just to survive and not surviving to live, or perhaps we unknowingly live to just be a worker bee in someone else’s power hungry vision. Our actions can seem utterly illogical and maddening when it comes to the basic principles of maintaining a holistic synergy among our natural community… but that same lack of reason within our overloaded brains can be profoundly beautiful in all of its flawed judgment.

Right now I am sitting in my little New York City apartment thinking back to my trip to Montalcino, Tuscany, back in October and although it seems like a lifetime ago since everything has changed with COVID-19, I can close my eyes and remember visiting a tiny winery called Azienda Agricola Bellaria. It was one of those special situations that rarely happens when you are visiting a famous wine region such as Montalcino, in terms of realizing that a two-person operation Brunello producer is not just a tiny company that had popped up over the past decade but quickly realizing that this producer, Bellaria, had been an original founder of the great Brunello di Montalcino wines we know today.

Gianni Bernazzi stood in front of his modest home surrounded by Sangiovese vineyards; he owns a little less than nine acres (three and a half hectares) in total that includes various levels of Brunello and Rosso di Montalcino designated vineyards as well as a small portion of Cabernet Sauvignon and Merlot as well as Trebbiano and Malvasia that make separate IGT and Vin Santo wines respectively. Gianni was accompanied by his assistant that could only speak a limited amount of English, which I am always impressed by such a talent that I lack, and between my colleagues’ Italian wine speaking skills (two wine directors/communicators and another writer from the U.S. and Canada) we were able to communicate.

Heart of the Region 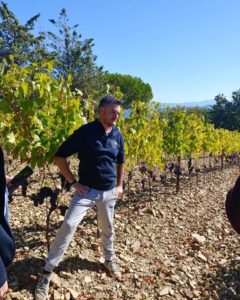 It was not completely clear where we were exactly in Montalcino as it seemed we were off a small road with no key markers and at first it just seemed liked a tiny home with vineyards in the front yard but as we walked through his backyard we found ourselves on a back road that took us to a steep hill where Gianni’s prized vineyards were planted by his grandfather. The soil is extremely important for great Brunello di Montalcino and ‘Galestro’ (schistous clay) as well as ‘Alberese’ limestone are highly desired in such a vineyard. Sometimes it is not so clear that these soil types are present even when a wine producer is telling you they are there but without a word it was obvious at this Bellaria site. At one point we asked which vineyards were nearby and the legendary name of Fattoria dei Barbi came up – one of the producers that helped to shape Brunello into the success that it is today; we then quickly realized we were in the heart of the region.

We popped our heads into Gianni’s winery/cellar and it was small yet had a few temperature-controlled stainless steel tanks with varying sizes of French and Slavonian oak for aging. In 2000, Gianni took the winery over from his grandfather and he brought these more modern touches but didn’t go too overboard as the transparency of the wines’ sense of place is of the utmost importance, just like his grandfather taught him.

When we went to have our tasting inside, we could see that Gianni went out of his way to make his home/tasting room a wonderfully inviting place and he used the space wisely placing some comfy chairs by a few of the barrels of wine with a picture of his grandfather smiling back at us. Gianni’s grandfather, Assunto Pieri known as Sunto, was everything to him as he spent his childhood in the vineyards following Sunto around and that he knew he wanted to follow in the footstep of his grandfather who passed away in 2018 at the age of 97… but Gianni expressed that it was still too soon to have his grandfather taken from him as Sunto enjoyed life up until his last breath. As we tasted the wines we whispered amongst ourselves that these wines were quite enchanting and certainly had a great expression of the heart of Brunello that balances that rusticity of the past with the precision of today’s modern winemaking that was perfectly represented by his ‘Assunto’ Brunello di Montalcino wine that came from the vineyard that his grandfather planted.

As we were delving more into trying to figure out when Gianni’s grandfather started the winery, which happened to be in 1963, all the pieces started to come together that his grandfather was one of the 25 original members of the Consorzio del Vino Brunello di Montalcino in 1967 and he was one of the 15 that signed Brunello’s community accord during that time. We asked Gianni if he had a copy of the document so we could see his grandfather’s name and lo and behold there was his name at the top.

The Best of the Madness of Human Beings

As we sat there eating lunch at Bellaria, that was made and served by Gianni himself, I could not help but think how endlessly exhausting it must be for Gianni and his assistant when it comes to running every aspect of the winery that ranges from vineyard management to operating the cellar to making sales to running tours and tastings; only during harvest is he able to hire a handful of people to help pick the grapes as funds are limited. It is already tough enough to run a winery when the owner has revenue coming in from other businesses but all Gianni has is the winery and the land while competing against other Brunello producers that have a lot more resources. In a way it seems illogical as usually when animals find that a situation becomes too hostile to their survival they move on to a different  and hopefully a better situation.

But that illogical aspect of humans which is rooted in emotion and sentiment is truly inspiring as I sit here in New York City where our governor has decided to put a halt on the economy fully knowing that it will plunge us into an economic depression that will take years to recover from, so we can protect our vulnerable population by stopping non-essential businesses and forcing non-essential workers to stay home; we are on a path to possibly having more critically sick people in the coming weeks than the hospitals can potentially handle and so we need to decrease the spread of the virus. There are some that argue that it is ridiculous to do such a thing to the economy just to save some lives.

The New York State governor, Andrew Cuomo, has laid out the seriousness of New York’s COVID-19 crisis and that it will only get worse as well as there being ultimately a large economic price to be paid that will be devastating to middle class and lower income people as well as piss off large corporations and the stock market but that he takes “full responsibility” and if there is anyone to blame it is him. He said that if he can save one life it will be worth it and he used his 88 year old mother, Matilda, as an example exclaiming, “My mother is not expendable.” He went on to talk about how no-one is expendable and that human life comes first.

Many animals leave behind, or in some cases will even kill the sick and most vulnerable because it is bad for the survival of the community and the deep instinct to survive is hardwired in many creatures. Humans have the same survival instinct but it is complicated and those complications can sometimes be destructive to sustaining balance yet in the case of Gianni carrying on his grandfather’s legacy at all cost and Andrew Cuomo wanting to protect his 88 year old mother and all of us who could not live with ourselves if we couldn’t at least try to save everyone (even if that is an impossible task) it shows an extraordinary beauty that lives within the human race. When it is all said and done, will the financial numbers make sense from a practical point of view? No they won’t, but we are only human.

2018 Rosso di Montalcino: 100% Sangiovese. An explosion of fruit and sweet spices with supple texture which is everything one wants in a Rosso that you want to drink now. Simply delicious!

2017 Rosso di Montalcino: 100% Sangiovese. At first it was savory with notes of grilled herbs yet rich black cherry fruit came out with an impressive underlying mineral note – over-delivers for a Rosso.

2014 Brunello di Montalcino: 100% Sangiovese. Bacon fat and cocoa dust and still has vibrant blackberry notes with only a touch of tannic grip that was complementary to the plush mid-palate fruit and a long, flavorful finish. This is my kind of Brunello – loved this wine!

2015 Assunto Brunello di Montalcino Riserva: 100% Sangiovese. Named after Gianni’s grandfather, Assunto, as it comes from their best vineyard which is also named after him. They have had to replant the vines through the years and this site has 30 year old vineyards. When Gianni said that his grandfather planted this vineyard and he would have been 99 years old if he lived today, I realized his grandfather was still planting vines at 69 years old. Gianni said his grandfather was helping him in the vineyards even right before he passed at 97. This is a big wine with broad shoulders in terms of structure, lots of fruit and layers of complexity that included tar, leather and that fierce minerality that seems to be present in all of Bellaria’s wines.

2013 Assunto Brunello di Montalcino Riserva: 100% Sangiovese. This wine was still tightly coiled when it was first opened but through time, during we had lunch, it evolved into baking spices to fresh thyme, wet stones and bright red cherry notes that was more open on the nose than the palate; the body is linear with firm tannins and it will take time and patience in the cellar to show its full potential.

2012 Assunto Brunello di Montalcino Riserva: 100% Sangiovese. A more elegant and refined Brunello with broken chalky limestone notes, pristine red fruit and a linear, energetic drive. Really gives ethereal qualities that has a lovely transparency of the Assunto vineyard and it is wonderful to see Sangiovese in all its refined glory in this wine.