A Life of Service is a Life Fulfilled

Posted on October 30, 2019 by damewine
ShareTweet

Every morning during my time in Montalcino, Tuscany, I awoke to the warm glow of the sun highlighting the rolling fog. It didn’t matter the time of day as the place gave a feeling of enchantment at all times that was further echoed by the beauty and charm of their famous Brunello di Montalcino wines that show the heart and soul of the Italian Sangiovese grape. As a full day of visiting producers in the area was winding down we would approached one of the most historic Brunello producers as the blue sky deepened its color while the light fell behind the stone buildings. 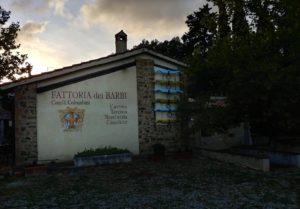 Fattoria dei Barbi is one of the producers that helped to shape Brunello into the success that it is today. The Colombini family founded the estate in 1790 and a document proves that they sold wine to France, under the wine name of “Chianti di Montalcino”, as early as 1817 yet Stefano Cinelli Colombini (CEO of Fattoria dei Barbi) said that he had found documents that go back to the them selling wine in bulk as far back as the 1300s. 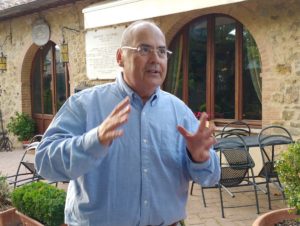 Stefano Cinelli Colombini met us outside his family winery, which also had a lovely restaurant on the property, Taverna dei Barbi. Despite Stefano earning a Law degree, he decided to pass on being a lawyer and instead helped grow the family’s business. His maternal grandfather, Giovanni Colombini, accomplished with cousin, Tancredi Biondi-Santi, the herculean task of raising the quality and profile of Brunello di Montalcino wines and that Colombini baton was passed to Stefano’s mother, his grandfather’s oldest daughter, and now he carries it today – although he notes that his elderly mother is always there in the cellars with him as he gestured at a life sized photo of her during our tour.

Stefano was a sweet man with a gentle personality whose eyes would constantly sparkle with delight when he talked about the history of Montalcino and Brunello wines. The Colombini family had an impressive history with important politicians, scholars and nobility that shaped the area through the ages and as the 20th generation heir to their winery and land (that he has divided with his sister), Stefano is the custodian of preserving and sharing their legacy. It seemed each Colombini he pointed out, as we passed their photo, had a fantastic story that accompanied him and it was as if Stefano was taking us in a time machine through several centuries of Montalcino; then we came upon the “saint” of the family.

The saint in question was Giovanni Colombini. Giovanni is an important, common name in their family, but this particular one lived during the 1300s in the nearby city of Siena. As we asked about more detail of this saint, Stefano beamed with enthusiasm as it seemed he was quickly going through his ancestors’ biographies as he wasn’t sure if it interested us; but our evident curiosity gave him an opportunity to tell us this saint’s story that he was obviously dying to tell. “He was the richest man of Siena at that time and he was a banker”, Stefano started telling us with a slight smile that indicated his awareness that no one would ever guess that would have been the beginning of a saint’s story. Stefano continued, “One day he came home and found his wife reading a book on the history of saints and he was upset because he wanted to eat and she was so busy reading that she didn’t make dinner. So he took the book and threw it into the fire yet one page remained in his hand; the page spoke of a saint from Florence, a female, who decided to give everything to the poor.”

Then Stefano described in detail the confusion of Giovanni and how his ancestor obsessed over the story of this woman giving her life to the service of others. Through time Giovanni saw his life as foolish because he was devoting everything to money and power when the “only real thing was eternal life.” So he went to the main public space in Siena, Piazza del Campo, and he walked into the halls of government and started scrubbing the floors; he then went into the streets and started washing the feet of the poor, as it was a way to find that special saint trait of humility within himself. Since Giovanni was well-known as the richest man in town, a crowd of people gathered and they were shocked – many thought he had gone mad.

Giovanni told his wife he would leave the trappings of the world to live a life that was completely devoted to service like the story that inspired him; he set up his wife with a life-annuity and then gave the rest of his money to charities. He then formed a group that included devotees who gave up their worldly possessions to spend their lives among the people, teaching the gospel, taking care of the sick and even teaching academics such as mathematics to help educate those that never had the means to be gifted with formal schooling. And those who were part of this order could only accept food, such as bread, to survive and they were never to accept money. Their ultimate fate was explained by Stefano, “But then the order was placed into question by the Catholic Church because they did not speak Latin and only spoke Italian to connect with the local people and so the order was closed. It is a pity as it was really a noble idea to deal directly with the people.”

I was taken by this story as I myself, in the beginning of my adulthood, considered devoting my life to becoming a Buddhist monk; spending a life serving others, no thoughts about material things, practicing discipline of the mind while debating the age old questions of our times. And I could see the great admiration from Stefano in regards to this particular forefather as he himself has devoted himself to tell the stories of Montalcino, talking to historians throughout the decades; he has even written a book about the various families of Montalcino that he will release soon. But his devotion to preserving this history is purely a passion as there is no real money besides paying off expenses that are gained. This greater purpose is evident in the museum he created on his property that is devoted to all the different centuries of his homeland, as far back as he can find as he is constantly searching to showcase this particular civilization. After my visit with him, it made sense why every other wine producer we visited talked so highly of this winery; not only because of their historical importance that includes them being the first to export their wines after World War II but the generosity of Stefano to spread the “gospel” of Montalcino was the biggest part of it. 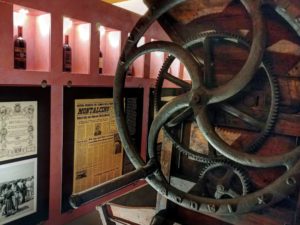 The Buddhist monk’s life was not for me; honestly, I think I was using it to hide from issues that I needed to resolve in the greater world and that my place of service was within my community; yet every day it is difficult struggling with all the superficial trappings that are always trying to take one off track of finding deeper meaning to their life. But I think many of us who feel at times useless or lost undervalue our own contributions; whether it be to family, friends, volunteering or even those seemingly small moments when we decide to take the higher road at work to not be ruthless, possibly losing out on advancement, or deciding to help an acquaintance while refusing to receive anything in return. We don’t give ourselves enough credit for how we are servicing the world even if we are not part of some formal order or specific belief system.

Stefano’s story of the saint of the family shows a man who found purpose by simply going to the streets and taking care of all that he could; Stefano has the same philosophy with his passion as an “amateur historian,” as he calls himself, with photos, documents and artifacts that overwhelmingly focus more on the place than his particular family history… he even has bottles, enlarged photos and biographies of many of the other producers in his museum and ultimately he wants all the producers to be honored there. As we constantly peppered him with questions about his extraordinary place in Brunello history, he downplayed it with the idea that his family was lucky and it really didn’t become exciting until the area, that was at one time a dying town, started to become successful as a whole… and it dawned on me that his service to this area is really what makes Fattoria dei Barbi an outstanding producer. It is an example that all of us can live up to everyday. 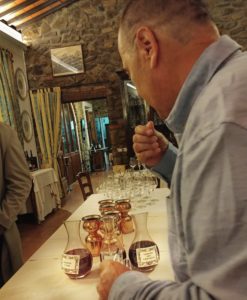 2019 has been a long growing season for Montalcino and so many people had just picked grapes during our visit and hence Stefano gave us a tasting of Sangiovese in the first day, second day and third day of fermentation. All of the producers we visited had talked about ’19 as being high for quality as well as quantity and a lot of the juice, as well as grapes we tasted, just coming into the cellar, were already delicious.

–2012 Riserva: 2012 produced rich wines with ripe fruit while still having freshness that was displayed in this brooding, black berried wine with lots of spice and tobacco leaf yet it was vibrant and bright on the long, flavorful finish. 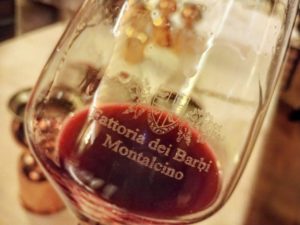 –2012 “Vigna del Fiore” Single Vineyard: The Vigna del Fiore is 14 acres (5.7 hectares) in size and it has been cultivated by the Colombini family since the 16th century. Stefano said this is one of the southernmost and oldest vineyards in the whole area of the Brunello di Montalcino and it is known for its elegance. Jasmine tea and juicy cassis on the nose drew me in to find sweet black and red cherries on the palate with hints of tar and crumbly earth that was multi-textured with finely pixelated tannins on the impressively complex finish. Only 3,900 bottles were made.

-2013 “Vigna del Fiore” Single Vineyard: 2013 was a cooler vintage that produced wines with restrained fruit, intense aromatics and crisp acidity. A delightfully pretty nose with violets, fresh oregano and minerality that had a linear structure with chiseled tannins and fierce acidity that gave an energetic lift to the wine that was persistent in its aromatic enchantment. Only 4,000 bottles were made.