Full Circle: Realizing That Paradise Is Where You Started

Posted on April 24, 2019 by damewine
ShareTweet 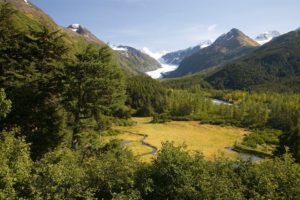 Turning onto a dirt road, the fear of the GPS no longer being of any help starts to sink in; yet the fear is tempered by the raw beauty of the surrounding forest that enveloped the car with the slowly rolling fog seemingly a greeter to an enchanted place. Once it got to the point where it seemed that one’s destination would never appear, the forest opened up showing a glorious hillside vineyard. It is serene – hawks flying overhead and old redwood trees circling the vines as if they were the ancient protectors of this parcel of land. There is no way to capture this place with a photo – one can only take in the moment. A vineyard that no one would ever guess was there, tucked away like a hidden treasure.

This story was shared with me by the winemaker of Kenwood Vineyards, Zeke Neeley, about his single vineyard Pinot Noir from the Santa Nella as we tasted this wine from the 2015 vintage. Zeke said that the great thing about Sonoma, with its protected 52 regional parks, is that many of these vineyards are tucked away surrounded by nature – and most importantly, that nature could be enjoyed by those who lived and visited Sonoma County. The locals have such a commitment to preserving such a healthy way of life that the Sonoma County Winegrowers has made a commitment to try to get as close to 100% sustainability as possible for their vineyards. In 2018 they reported 97% (58,318 acres) as being sustainable according to a self-assessment and 89% (51,485 acres) actually being certified.

Zeke talks about Kenwood’s plans for sustainability with not only having their own vineyards being 100% certified sustainable, moving towards organic in their estate vineyards, but trying to get all the farmers they deal with to become certified sustainable as well; right now he estimates that “90-95%” of the vineyards outside of their own estates are sustainable. Yet trying to get multi-generational grape growers to become certified has its challenges as the paperwork can be scary to people who know a lot about working their land but do not know that much about the outside world. On the positive side, Kenwood is there to assist them as well as the Sonoma County Winegrowers who will help them with the logistics of becoming certified for free. 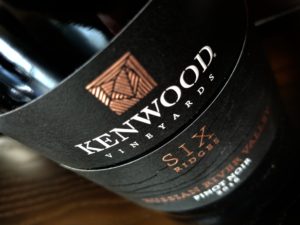 Zeke became the winemaker for Kenwood around 2 ½ years ago. He has an interesting background as he initially started in the BioTech industry working on cancer research until he found himself at UC Davis studying for an M.S. in Viticulture and Enology. For about a decade, Zeke had been a winemaker in Napa Valley with experiences at two very different wineries; the first, Trefethen and the second, Orin Swift. Trefethen is a family owned winery that only works with their own estate vineyards while Orin Swift is a much bigger enterprise sourcing fruit from “60 different vineyards and working with four separate facilities.” Both experiences taught him a lot in regards to great terroir as well as juggling the logistics of managing a multitude of vineyards. Zeke said that a new winemaker is expected to bring innovation to the winery that he is joining and so there is an expectation for him to take things to the next level. Kenwood already has all the goodies when it comes to modern technology and his innovation is to make the wines better year after year. “That is the only innovation I can offer” said Zeke and he continued, “If we are not improving the wines every year, we are failing.”

Despite Kenwood making their single vineyard wines since the 1970s, expanding to a more selective process with their Six Ridges line a few years back, such as the Russian River Valley ones I tasted below, there is a more concentrated focus in finding top performing vineyards among the plethora they source from in the Sonoma area with new projects such as the first vintage of The Barn – a wine that represents the heritage of the past with the energized direction of the future. Many of you will know Kenwood’s wines as those bang for the buck ones found in your local corner stores. Of course, giving a more general taste of Sonoma County for $16 is still important to their mission of making these wines accessible to all, just like allowing the natural beauty of the area to be enjoyed by everyone, but there are a lot more hidden vineyards and attention needs to be given to expressing their brilliance instead of blending it away – that is where Zeke comes into the picture. It is no small feat to visit several vineyards (that are not so accessible) on a constant basis to find the next stars but he is up for the task.

The name and label of The Barn is an homage to Kenwood’s restored old winery which is now their tasting room that was originally established by other owners in 1906; not only did it survive the changing of various hands throughout the decades, but it has survived Prohibition, WWI, WWII, the devastating 1906 earthquake (which was their first vintage) as well as the economic collapse after this tragic event. Zeke looks towards his four best vineyards and takes the strictest selection of premium fruit from each, and then, after the various plots of wines are aged for a year, there is a final selection to create The Barn and then it continues to age – the first vintage is 2016. It was singing the day I tasted it and showed the potential of Zeke being the custodian of these vineyards.

Zeke said that, in many ways, working for Kenwood was like coming back home because he grew up in the Bay area of San Francisco – just south in Daly City. He spent his summer vacations at his grandparents’ home in Sonoma and he remembers it being “paradise”. Even before he went into the wine industry, he and his wife would drive up from San Francisco and take his grandparents out for lunch and go wine tasting, and sometimes they took them to Kenwood. Again, that was before he changed paths to go into the wine world and so he feels he has come “full circle”. Sometimes we have to step away from home for a while to truly appreciate everything as it is and to cement the idea that it is every bit the paradise that our young minds remember.

–2017 Six Ridges, Chardonnay, Russian River Valley: 100% Chardonnay. This wine only has around 25-30% new oak (French and Hungarian) as what he is shooting for is to showcase the fruit with only partial malolactic and some battonage for body. It was a pretty wine with elegant white peach and a hint of spice and white flowers that was slightly creamy yet invigorating on the palate as well.

–2016 Six Ridges, Pinot Noir, Russian River Valley: 100% Pinot Noir. This is a blend from selected vineyards that displays different aspects of Russian River Pinot like the above Chardonnay; some linear and tart and others lush and fruity to create a multilayered wine. This wine had a rich concentration with strawberry reduction balanced with dried sage and a brightly flavorful finish. 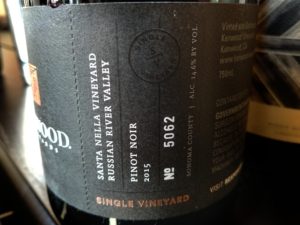 –2015 Single Vineyard Santa Nella, Pinot Noir, Russian River Valley: 100% Pinot Noir. This single vineyard had more vibrant fruit with fresh cranberries and black cherries that had a thrilling energy with a touch more tension; it had complex aromas on the finish with anise seed and a stony minerality. 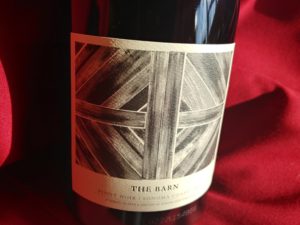 -2016 The Barn: 100% Pinot Noir. This bottle had only been opened for 30 minutes (kept in the bottle) and it was singing from the start – remarkable. Zeke sources from four of his best vineyards and takes the top selection from each, and then, after a year of aging, he makes the final selection and it goes back to aging some more. The Barn is on another level with an incredible richness of cherry pie, cocoa powder and pressed lilacs with baking spice that had an extra layer of hints of forest floor and wild morels.