The Extremes of Wine

Posted on September 30, 2018 by damewine
ShareTweet 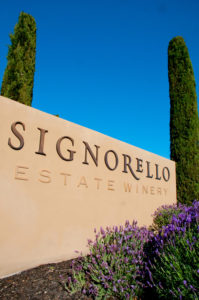 Around 11pm on October 8th, 2017, Pierre Birebent was abruptly woken up from a deep sleep by his daughter saying that his phone had been ringing several times… in his half-dazed state, Pierre looked at his phone and saw messages that said there was a fire… he quickly woke up and immediately jumped in his truck and started driving down the road with a fierce intensity envisioning the worst case scenario as panic furiously pumped through his veins and heart.

Pierre is the winemaker and vineyard manager for Signorello Estate and the messages on his phone were left by the owner of the estate, Ray Signorello Jr., who was in Canada at the time. Pierre was telling us this story on November 11th, just a little over a month after it happened, at the Wine Bloggers Conference taking place in Santa Rosa in Sonoma County, California. The conference had been planned for over a year, but when one of the worst periods of California wildfires (from October 8th until the 30th of October) hit a significant part of wine country (according to Cal Fire: over 245,000 acres were burned, 100,000 people were forced to evacuate, estimated 8,900 structures destroyed, and 43 lives lost), many of us planning on attending the conference thought it would be cancelled. But word got back from the various wine participating counties that they needed us to come to the conference and talk about their wines, their tourism (most of the tourist sections were untouched) and to inspire people around the US to support them.

From my perspective, I had overwhelming anxiety that I felt like I needed to go out to Santa Rosa, Sonoma County, (4,658 homes were destroyed in the wildfires) as soon as possible… I didn’t know how I could help out, but as I saw all the people I knew in the wine industry in California talk about the merciless infernos coming and going, swiftly changing direction, many having to evacuate and re-evacuate many times, some losing everything, watching it all play out on Facebook while the national news barely talked about it, I felt like I needed to be there and be prepared to do whatever they needed me to do. It was the same feeling I had living in downtown Manhattan during 9/11. I did not want to flee, my overwhelming pain made me want me to stay and find some semblance of grounding and peace by being of some use in my home of New York City… of course it took many years to find our grounding as a city. 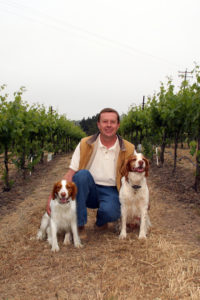 Pierre is no stranger to devastating events that can alter the rest of a person’s life. Before coming to Napa, he lived with his family, sixth-generation vintners, in Algeria. But when he was only 2 years old, his mother fled with him to Spain when the Algerian War broke out. Pierre’s father, Paul, stayed behind to look after their vineyards until one day he and a worker were attacked; Paul escaped but the worker who had warned him of the attack from the distance never made it out alive. Then the Birebents picked up the pieces of their lives and were able to pool their resources to buy undeveloped land in Corsica; after they built roads and prepped the land for vineyards they were able to rebuild a family winery and legacy for future generations. Pierre, who knew that he would not have much free time after he took on the responsibility of his family farm in Corsica, decided to spend his youth studying at the Montpellier University in France and working in Napa to gain more knowledge and experience to bring his family’s wines to the next level of quality.

Unfortunately, tragedy would hit his family again in Corsica when Pierre’s father, Paul, was attacked by people in masks and bound with rope with his vineyard crew, as his house, his winery and farm equipment were burned in front of him. The toxic emotion of envy had eaten away at Corsican locals who turned to terrorism to take out their rage on those who were successful and not considered real Corsicans. Everyone escaped with their lives but Pierre, who was in Napa at the time, decided to stay in Napa Valley as there was no future with his family winery; he eventually settled at Signorello Estate and lives in St Helena with his wife, Nathalie, and his children, Paul and Isabelle; Pierre’s parents retired to the Riviera.

There was Pierre, at the Wine Bloggers Conference, reliving another traumatic event in his life that he hadn’t yet even been given a chance to process. When Pierre arrived at Signorello that night, he saw that there were only a few bushes, a garden and trees on fire so he was hopeful that he could put out the fires himself with a hose that he grabbed. One of his guys was there to assist him with extinguishing the fire with another hose but before they knew it, the fire had jumped to the roof assisted by the high winds. Pierre gave his worker a damp handkerchief to hold over his nose and mouth while Pierre held his t-shirt over his own to combat the brutal smoke that blew in their faces. They stood there and fought the fire as best they could but within 45 minutes, it had consumed the entire building. By that point the police had arrived and forced Pierre and his worker to leave; once the police left, Pierre went back towards the inferno to try to put it out… he tried 3 different times but he had gotten to the point where he was gagging from the black smoke and his assistant physically grabbed him yelling, “Let’s go, let’s go, let’s go!!!”

Pierre was able to make it to his crush pad and stainless steel tanks that were in the midst of fermenting his grapes – there was a mesh top above the tank to give it shade and he hosed them both down, spending 15 minutes soaking the mesh top. It finally got to the point where he had to get back a few hundreds yards away (so the smoke didn’t kill him) and in Pierre’s words he just, “watched what happened”. Pierre’s head slumped down and his voice broke as it lowered into his gut as he sat there on the panel struggling against his intense emotions to get the words out. Pierre then said that he called the owner who was in Canada so he could let him know what was going on “and that was it”… a profound silence hit the room as Pierre took a few breaths. It took three days before he was able to visit the property again since there was a police blockade; the vineyards and cellar were untouched, the wine which was tested (by a lab) was not affected by smoke taint, but their main building, tasting room and offices had burnt to the ground.

We Need to Believe

I have recently read that Signorello Estate opened a modular-unit tasting room so they could resume giving wine tastings to visitors. The owner, Ray Signorello Jr., made a commitment to rebuild 3 days after Signorello burned down, but at the time, it still seemed to those of us on the outside that there was a question mark if they would be able to continue… but luckily, despite being given some fierce blows, they have come back with Pierre at the helm. California is still getting some tough hits by wildfires; the only way they can keep continuing, keeping an important part of American wine culture alive, is if those of us who do believe in them support them with our purchases, with our visits, and with our deep compassion and empathy for the people who are struggling to keep the legacy of amazing California wines alive. One of the greatest things about wine are the beautiful person that makes me believe that there is still lots of humanity and love in the world… and that is all we need, to have someone make us believe when we are losing hope.

Celebrating Wine, Life and Inspiring Colorful People in New York City and Beyond!
View all posts by damewine →
This entry was posted in Dame Wine and tagged #WBC17, Napa Valley, USA. Bookmark the permalink.