Nothing Worth Having Belongs to Just a Few

Posted on December 27, 2017 by damewine
ShareTweet 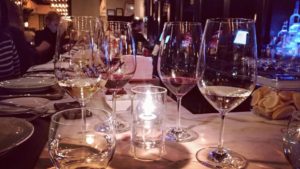 The quest for happiness affects us all throughout our life. It comes and goes like an old friend from our childhood, who gives us a not so gentle reminder that we cannot find peace within our existence by just accumulating stuff and clicking off personal and professional achievements from a list. We start to feel a dull ache over time… an inner voice that whispers inside our deepest consciousness that there is something missing… many times we do not know what it is, so we act out by trying to tightly cling to those things in our life that define us, that seemingly give us worth but really create a false sense of self. Such is the story of the original “Ca’ Marcanda” owners who would drag out several exhausting meetings when it came to holding on to a piece of land that was meant for so much more. 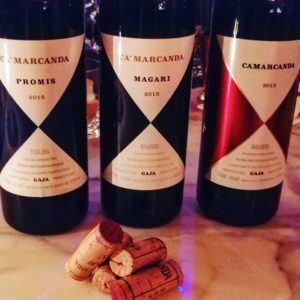 When the great Angelo Gaja, the legendary Piedmontese wine producer, decided to make “Super Tuscan” wines in Tuscany, he knew two things; he needed to go to the prestigious area of Bolgheri, and he needed to consult with a soil expert in the area.  As he looked over a soil map indicating the different soil types by various colors, he saw there were four isolated areas that shared a similar color – and so Angelo pointed to one of them. “What is this area?” to which the soil expert replied, “Ornellaia.” And then, he asked about a second one and the answer was “Sassicaia,” and the third was “Guado al Tasso”… it was obvious that there was a theme, a theme of vineyards that created the greatest Super Tuscans wines. And so, finally, he got to the last plot and pointed to it… he waited in anticipation… trying to guess what other wine could be made from this remarkable soil… and then the soil expert said it was owned by wealthy Italian people who used it as a summer home and that it was well-known that they would never sell it. They did not need the money and had no interest in parting ways with their precious haven.

As I was sitting there listening to Angelo’s son, Giovanni Gaja, tell this story about Ca’ Marcanda, I could see the smile on his face as Giovanni knew all too well that his father never backed down from a challenge.

Gaja and the House of Endless Negotiations 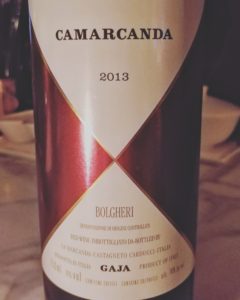 Angelo started his relentless pursuit of that special plot of land. The property was owned by two brothers and one sister, aged 75 to 82, who were adamant that outright selling the property would never be an option, but perhaps a lease of 5 or 10 years would be possible. Angelo could not accept the property on such a short term, considering he would be investing so much money into planting vineyards intended for the highest quality wine. And so he went back and forth trying to convince them… telling them what was involved in making wines of such stellar quality and how he needed a much longer lease. It got to the point where Angelo’s wife told him that he was dealing with “Ca’ Marcanda” people… a Piedmontese term meaning “house of endless negotiations”… and it was best to just walk away from a situation that was not going anywhere.

But Angelo would not give up, and he went back again and again and again… until finally, the owners realized that at such an advanced age, it did not make sense to hold onto this estate that was obviously meant for so much more.

Angelo was able to buy the estate, build the winery and began planting vines in 1996.

The More We Hold On the Unhappier We Become

The roller coaster of life can be tough at times because, many times, we compare our journey to others’… focus too much on what others have or what they had been given. The idea that as long as we get to the next notch on our belt of envious desires we will become happy is an unhealthy one, creating a cycle of highs and lows that will never result in true happiness that is lasting.

One person is only able to accomplish so much, one only has so many resources, only so many talents, so much time. When panic sets in with those dreadful feelings that we have barely accomplished anything by midlife, we should fight that urge to try to fiercely grab onto as much as we can and never let go because our greatest achievements are those we pass on to others… in the form of kindness, knowledge, experience… or in this case, land. Because anything worth having gives joy to many and does not only belong to just a few. 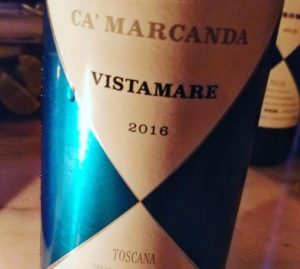 –2016 Ca’ Marcanda Vistamare: 60% Vermentino and 40% Viognier. It took Angelo Gaja a while to find the right partner for Vementino, and this is the blend that he has found works best and I have to agree it is a nice match… Marked acidity, medium body, floral and stone fruit notes and a long flavorful, expressive finish. 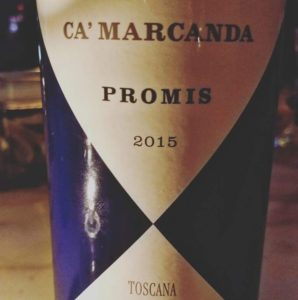 –2015 Ca’ Marcanda Promis: 55% Merlot, 35% Syrah and 10% Sangiovese. A generous and seductively inviting wine with blueberry compote, black pepper and a bright black cherry finish with manicured tannins and a lovely overall freshness. The 2015s have a lot more flesh on their bones than the 2014s. Comes from the dark clay based soils on the estate.

The Promis is the most open in its youthful state out of all the red Ca’ Marcanda wines. 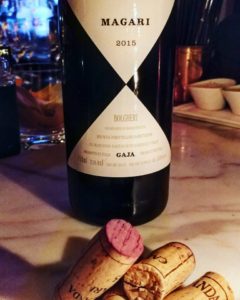 –2015 Ca’ Marcanda Magari: 60% Cabernet Franc, 30% Cabernet Sauvignon and 10% Petit Verdot from dark clay based and light limestone soils… so it is nimble with finesse, as well as richly decadent with sweet raspberries and violets… the fine tannins and supple body make this wine irresistible but it will only improve over the next decade.

Magari is generous when young yet it still has powerful structural components that give it the opportunity to improve with cellaring.

–2013 Ca’ Marcanda Camarcanda: 50% Merlot, 40% Cabernet Sauvignon and 10% Cabernet Franc. Side note: The blend will change to 80% Cabernet Sauvignon and 20% Cabernet Franc in 2015 as Giovanni Gaja said that they are planning to keep the blend Cabernet Sauvignon dominant. This 2013 showed an enticing mixture of autumn leaves, baking spice and fresh leather with deep brooding undertones. An elegantly firm structure displayed well-managed tannins that had a silky quality balanced by juicy fruit. It needs to be decanted for several hours or hold onto this beauty for a few more years – this wine should be long-lived.

Camarcanda is the longest lived of all the wines, 100% coming from the terre bianche (white soils) of the Ca’ Marcanda estate. 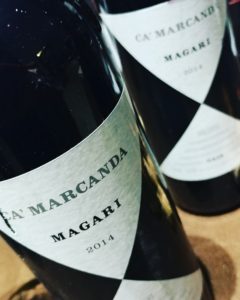 –2014 Ca’ Marcanda Magari: The 2015s have a lot more flesh on their bones than the 2014s yet the lovely bright fruit and energetic body makes this wine enjoyable in a completely different way than its successor. Fresh damson plums and sweet spice are prevalent on the long, linear finish.